IRSYAD AL-FATWA SERIES 316: THE RULING OF CALLING OUT THE ADHAN WHILE LYING DOWN 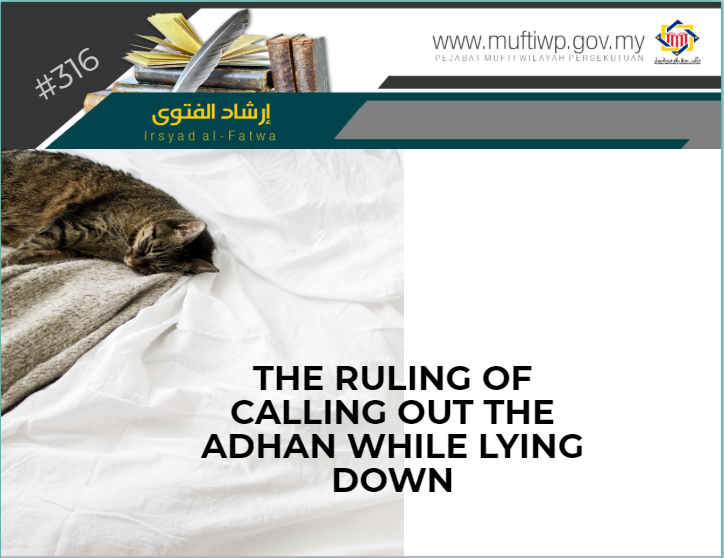 The adhan is the greatest eminence of the Muslim ummah. Every word in the adhan is a summary of the faith believed by Muslims. Every word of the adhan includes words of honor and praise towards Allah SWT and the proclamation that there is no God that is worthy of worship except Allah SWT. Illustrating our love towards the Prophet PBUH. Calling out to all Muslims to perform the prayer which is the pillar of Islam and summoning the Muslim ummah to strive until we reach the success of this world and the hereafter.

It is sanctioned to be called out at the beginning of prayer time. Indeed, the scholars state that the adhan is a sunnah that should not be neglected. The Prophet PBUH even mentioned the benefits for those who called out the adhan. From Abu Hurairah RA, the Prophet PBUH said:

"When the Muslims arrived in Al-Madinah they used to gather and try to figure out the time for prayer, and no one gave the call to prayer. One day they spoke about that; some of them said: 'Let us use a bell like the Christians do;' others said, 'No, a horn [1] like the Jews have.' 'Umar, may, Allah be pleased with him, said: 'Why don't you send a man to announce the time of prayer?' The Messenger of Allah (ﷺ) said: 'O Bilal, get up and give the call to prayer.'"

Based on this hadith, we could understand from the commandment of the Prophet PBUH to Bilal RA, the adhan should be called out while one is standing. This is commented on by Syeikh Syaraaful Haq al-Azim Abadi. He cited the opinion of al-Khattabi which he took from the book Ma’alim al-Sunan. Al-Khattabi said this hadith is evidence regarding the obligation of standing while calling out the adhan. (Refer ‘Aun Al-Ma’bud Syarh Sunan Abi Daud, 7/150)

Imam al-Nawawi state that it is sunnah to stand while calling out the adhan. This is so that the adhan that is called out is clearer. (Refer Al-Majmu’ Syarh Al-Muhazzab, 3/103)

This means that standing while calling out the adhan is sunnah and not an obligation.

Syeikh Zakariyya al-Ansari said if a person calls out the adhan while sitting when he is able to stand, then his action is makruh (undesirable). Surely, lying down while calling out the adhan is worse, it is nearer towards a prohibition. (Refer Asna’ Al-Matalib Fi Syarh Raudh Al-Tolib, 2/240)

May Allah SWT give us the correct understanding to us all. Wallahua’lam.

[1] Horn (shofar) is an instrument used by the Jews. The sound it produced is similar to a trumpet, however, it is made out of animal horns. Shofar is usually blown on Rosh Hashanah day or as it is known in Hebrew as Yom Teruah day. It falls on the 1st or 2nd of Tishrei which is in September or October according to the Gregorian calendar. Shofar is also blown on Yom Kippur day which is celebrated on the 10th of Tishrei. Yom Kippur is the day when the Jews would fast and perform worship. (Refer  https://en.wikipedia.org/wiki/Yom_Kippur )