AL-AFKAR #58: IS THERE AN EXISTENCE OF OTHER HUMANS BEFORE THE PROPHET ADAM AS? 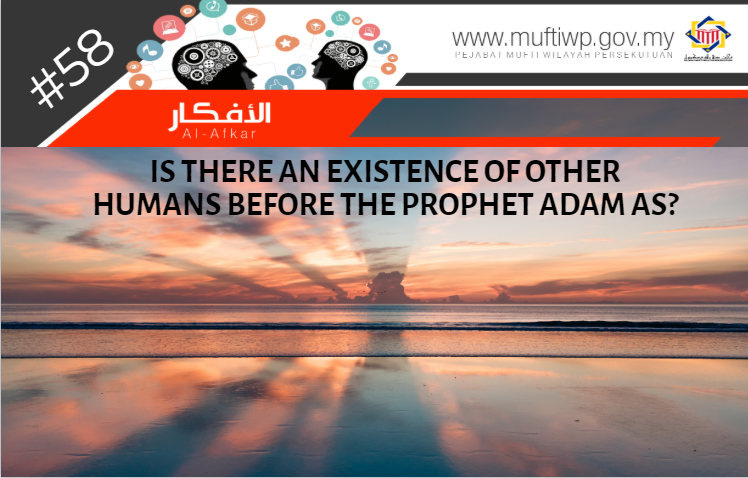 Assalamualaikum SS Dato’ Seri. We all know that the Prophet Adam AS is the first human created by Allah SWT and he is known as Abu al-Basyar which means the father of mankind. However, I once read a blog post stating that before Prophet Adam AS was created, there was another creation which is similar to humans was created and that is why in Surah al-Baqarah when Allah SWT states that He wants to create humans as the caliph of the earth, the angels are confounded because humans will only make destruction and spill blood on earth. The writer states that the angels knew about this because before Prophet Adam AS, there was another creation which is similar to humans that was created by Allah SWT.

Can I get an explanation from SS Mufti regarding this matter? Jazakallah khair.

Waalaikumussalam warahmatullah. Alhamdulillah, praise and thanks to Allah for the countless blessings He has blessed us all with. Blessings and salutations to the Prophet Muhammad PBUH, his wives, his family, companions and all those that follow his teachings to the day of judgement.

And [mention, O Muhammad], when your Lord said to the angels, "Indeed, I will make upon the earth a successive authority." They said, "Will You place upon it one who causes corruption therein and sheds blood, while we declare Your praise and sanctify You?" Allah said, "Indeed, I know that which you do not know."

Imam Abu Jarir al-Tobari states in his commentary, all creations are created before the creation of Adam. He also includes a narration from Ibn Abbas stating that the jinn are the first creation who live on earth, which later does destruction and spill blood. He also narrated from al-Rabi’ bin Anas stating that Allah SWT created the angels on Wednesday, the jinn on a Thursday and Adam on Friday. (Refer Tafsir al-Tobari1/232)

Imam Ibn Kathir states that the jinn are created before the Prophet Adam AS, and before the jinn there are creations named al-Hinn and al-Binn, then the jinn came to earth, kill them and eradicate them all from the face of the earth. (Refer Tafsir Ibn Kathir 1/55). However, ‘Allamah Ibn ‘Asyur states that this narration is baseless and does not come from any reliable source. It is just a popular story from the Persia and Greece. (Refer Tafsir Al-Tahrir wa al-Tanwir 1/228)

It is clear from the narrations that the Prophet Adam AS and humans are created after the creation of the angels and jinn.

How Did the Angels Knew that Humans Will Cause Destruction on Earth?

According to Imam Fakhruddin al-Razi, the scholars have differing opinions regarding how the angels knew that humans will bring about destruction on earth, whether it is revealed by Allah SWT, or istinbat and assumption on their part according to the following reasons:

According to Syeikh Mutawalli Sya’rawi, the angels knew for sure that Allah SWT wanted to create humans who would surely shed blood and bring about destruction on earth. The reason is, the jinn has been previously created and sent to live on earth and they already did the same thing. Allah SWT states:

“And We did certainly create man out of clay from an altered black mud. And the jinn We created before from scorching fire.”

The angels analogically deduced (qiyas) the attribute of humans with the jinn who has previously bring about destruction. (Refer Tafsir al-Sya’rawi, 1/125)

According Syeikh Wahbah al-Zuhaily, there are several probabilities of the reason why the angels knew humans will bring destruction:

Then We made you successors in the land after them so that We may observe how you will do.

As a conclusion, we would like to state that there is no other human creation before the creation of Prophet Adam AS. However, in accordance with the statement of Allah SWT which describes as if there is a human creation before the Prophet Adam AS, thus, it is assumed that the creation is actually from among the jinn, as narrated by the commentary scholars. They were the one responsible for the destruction and bloodshed on earth, and according to history, the jinn are the ones which are qiyas (analogically deduced) by the angels to be the same as humans, and they concluded that humans will repeat the same things that the jinn has done.

However, there are other opinions presented by scholars, such as the angels are informed directly by Allah SW, or the angels receive the information from Luh Mahfuz regarding the destruction that humans will make.