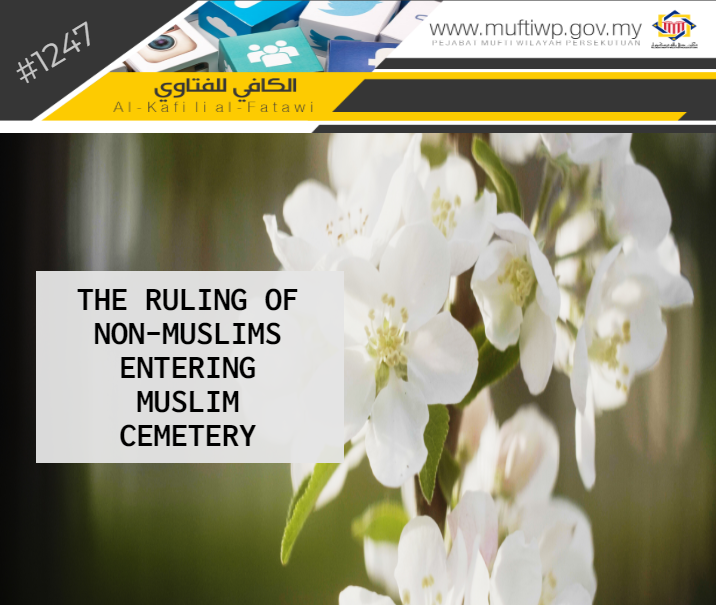 What is the ruling of non-Muslims entering a Muslim cemetery, such as to attend the funeral of a friend or participate in cleaning cemetery grounds?

We did not find any evidences that prohibit non-Muslims from entering a Muslim cemetery. Furthermore, we found the initiatives of a group of non-Muslims who work together to clean Muslim cemetery grounds as a part of an encouraged act of cooperation in good deeds as stated in a statement of Allah SWT:

“And cooperate in righteousness and piety,”

Scholars also state that it is not prohibited for non-Muslims to follow the funeral procession of a Muslim for the funeral and praying for goodness for the deceased. (Refer Hasyiyah al-Khurasyi ‘ala Mukhtasar al-Khalil 2/183, Minah al-Jalil 1/534 and Syarh al-Talqin ‘ala al-Fiqh al-Maliki 4/119)

This issue is also related to the ruling of non-Muslims entering the mosque and we have stated our disposition that it is permissible. (Refer our article through the link http://bit.ly/2Fb83VK)

Thus, if non-Muslims are permissible to enter a mosque which is also known as the house of Allah SWT, then it is also permissible for them to enter Muslim cemetery, especially if they enter it with good intentions.

In short, we affirm that there is no prohibition in the Quran and hadith that restrict non-Muslims from entering Muslim cemetery, especially if they have good intentions and do not harm or degrade the dignity of Muslims.

They are also welcomed to come and visit the graves of their relative or family members, however, any non-Muslim religious rituals are absolutely prohibited.

However, the person responsible to take care of the cemetery should remind the non-Muslims regarding the manners that they should be mindful of when they are within Muslim cemetery grounds. Among the manners are: