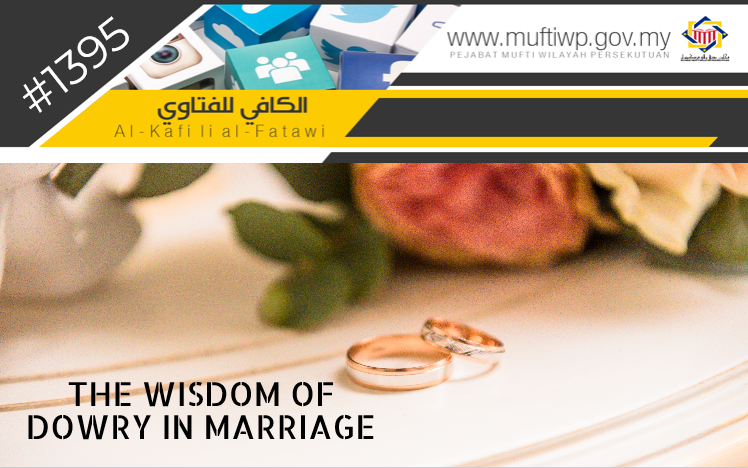 Assalamualaikum SS Datuk Mufti. Why does Islam set dowry as one of the valid conditions in marriage?

“And give the women [upon marriage] their [bridal] gifts graciously. But if they give up willingly to you anything of it, then take it in satisfaction and ease.”

Ibn Kathir said: According to Ibn Abbas, the word النحلة means dowry. Ibn Zaid explained it means something that is obligatory to be given to a wife due to aqad of marriage. It is wajib for a man to voluntarily give the dowry of his wife as a gift for her. (See Tafsir al-Quran al-‘Azim, 2/235)

In a hadith narrated by Sahl bin Sa’ad RA, he said:

Imam al-Nawawi explained the above hadith saying: “The hadith states that dowry can be of little or great value, when both parties are content with it, for an iron ring is a cheap dowry. This is the opinion in madhhab Syafi’e and the majority of scholars from among the salaf and khalaf.” (See al-Minhaj fi Syarh Sahih Muslim Ibn al-Hajjaj, 9/190)

In answering the above question, there are numerous wisdoms for the stipulation of dowry in marriage. Here, we will present several wisdoms of the sanctioning of dowry in Islam.

In the book al-Fiqh al-Manhaji, it is stated: Dowry is sanctioned to show the intention of future husband to build a good relationship and marriage with his wife. At the same time, it will enable the woman to prepare herself with the necessities for marriage such as clothing and expenses. (See al-Fiqh al-Manhaji, 2/586)

Syeikh Muhammad Mutawalli al-Sya’rawi said, Allah SWT obligates dowry on man for his spouse as proof of love between them. It also ties the relationship between the couple with love and compassion under the leadership of the man. (See Ahkam al-Usrah li Bait al-Muslim, pg. 75)

While according to Syeikh Dr Wahbah al-Zuhaili, the purpose for a dowry is to show the priority and importance of a marriage, at the same time honouring the status of women. The preparation of dowry in Islam is also seen as a benchmark of the preparedness of the couple in facing a greater trial of married life. Dowry is given as a symbol of virtue and sincerity from the husband’s side to live together with the woman of his choice. (See al-Fiqh al-Islami wa Adillatuh, 9/239)

Syeikh Dr Yusuf al-Qaradhawi explained the wisdoms for the sanctioning of dowry are:

“And give the women [upon marriage] their [bridal] gifts graciously. But if they give up willingly to you anything of it, then take it in satisfaction and ease.”

Even in other relationships that are of less importance than marriage, people would give presents and gifts – as a symbol of determination – then it is prioritized in family relationships. Thus, Islam obligates a man to pay half of the dowry if he marries a woman and divorced her before intercourse. This is as an acknowledgement on the great and pure agreement as well as a symbol that intercourse is not the main purpose – for in this case intercourse had yet to happen. Allah SWT states:

“And if you divorce them before you have touched them and you have already specified for them an obligation, then [give] half of what you specified - unless they forego the right or the one in whose hand is the marriage contract foregoes it.”

According to the above statement, it is clear that there are numerous wisdoms on the sanctioning of dowry itself. Among them is to show the honour of woman as the symbol of virtue and status in Islam. It is also a sign of determination for a man in building a relationship with a woman.

In our opinion, dowry will lead to the feelings of contentment for all the people involved which includes the wife, and their respective families. This is the greatest difference between the aqad for marriage in Islam and other religions.

Hopefully, this explanation will increase the love, mawaddah and rahmah between husband and wife which will lead to Baiti Jannati. We end with a supplication to Allah SWT: