AL-KAFI #1578: THE RULING OF INHERITANCE FOR PEOPLE WITH MENTAL IMPAIRMENT 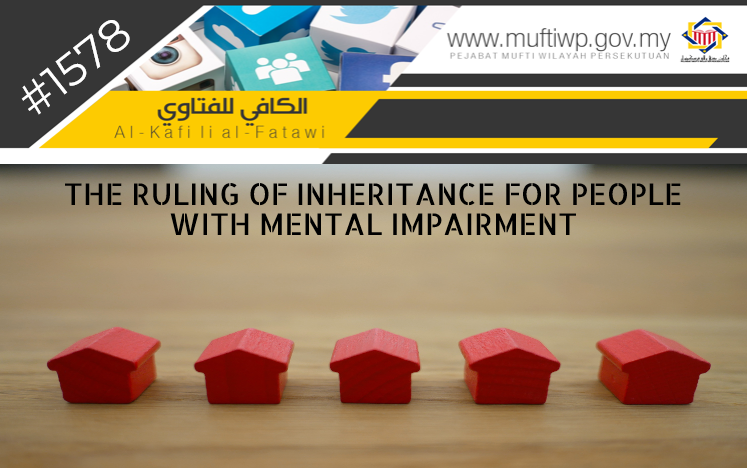 Assalamualaikum SS Mufti, I have a question regarding inheritance. Can a person with mental impairment receive inheritance? Is the portion for him the same as a normal person? Hope for an explanation from Mufti. Thank you.

We start with the words of the Prophet Muhammad PBUH:

"Give the prescribed shares to those who are entitled to them, and what remains goes to the nearest male relative (of the deceased)."

The above hadith is the evidence and guidance to the Muslim ummah in terms of the management of inheritance. When a death occurred, and he left a certain amount of inheritance, then the inheritance should be divided as set by syara’ according to the guidance in the al-Quran and al-Sunnah. (See Syarh al-Nawawi ‘ala Muslim; 11/54). This hadith also states that each heir of the deceased has a right on the inheritance of the deceased as long as he does not breach Shariah limitations such as murder, renouncing the religion and others which would abrogate his right as an heir.

As stated in a book written by Dr Wahbah al-Zuhaili, matters that prevent a person from receiving inheritance are murder, slavery and renouncement of the religion. (See al-Mu’tamad fi al-Fiqh al-Syafi’i; 4/354-356)

Hence, according to the above matters, it is clear here that any type of mental impairment does not prevent a person from receiving his portion of the inheritance. However, it is also related to the discussion in Usul al-Fiqh where they are categorized as ‘atah which means mental retardation, a type of disability where the patient (the person) has a disability to understand, his speech is incomprehensible and loss of ability to evaluate or consider something to be good or bad. (See al-Wajiz fi Usul al-Fiqh; pg. 95)

In the matters of trade or inheritance, they are compared to a mumayyiz young child, then they have the right to receive their portion of the inheritance under the oversight or administration of the person’s wali or a person given the responsibility to care for the person, not taking more than necessary for the person taken care of (the person with mental disability), sufficient for their everyday life. (See al-Wajiz fi Usul al-Fiqh; pg. 89, 90, 95)

In this verse, if one analyses it carefully, Allah SWT commanded to return the property of orphans after they reached puberty. This means, for the duration where they live their lives before they reached this age, the wali or an appointed person is responsible to manage it properly and not take their property unjustly, not for their necessity and other forms of oppression on the property of the orphans. (See Tafsir al-Munir; 4/228-230)

The relation of this verse and the issue asked are those with mental impairment as explained above where they are considered as a mumayyiz young child, thus, in the matter of inheritance for those with mental impairment, they are categorized as orphans, hence, we analogically deduce it according to the above verse in the matter of the wali or people with the responsibility to manage their property the best they can without betraying the trust given.

Although the verse is seen as a general commandment to return the property of the orphans when they reached puberty, however, when the next verse which is the sixth verse is considered:

“And test the orphans [in their abilities] until they reach marriageable age. Then if you perceive in them sound judgement, release their property to them. And do not consume it excessively and quickly, [anticipating] that they will grow up. And whoever, [when acting as guardian], is self-sufficient should refrain [from taking a fee]; and whoever is poor - let him take according to what is acceptable. Then when you release their property to them, bring witnesses upon them. And sufficient is Allah as Accountant.”

Through this verse, Allah SWT explained that before the orphans’ property is returned back to them, the following must first be fulfilled:

Thus, Dr Wahbah al-Zuhaili said both these matters are qarinah (legal proof) that must be ascertained first before their property are returned to them. (See Tafsir al-Munir; 4/230). Hence, coming back to the question discussed in this article, the related matter is the second item which is al-Rusyd which must be considered before the property is handed back to them. Thus, in this case, those with mental impairment has a right to receive their portion of the inheritance but their wali or person entrusted with the responsibility to manage the property on their behalf.

To conclude, people with mental impairment have the right to receive their portion in the inheritance left as the heirs, their portion is the same as any normal person according to the Faraid calculation and their inheritance is managed by people who are entrusted to manage it without taking from it wrongfully, such as taking more than necessary and using their property for unbeneficial matters. Lastly, we advise those who are responsible to manage the property of those with mental impairment to manage it with a sincere heart and good intention. Not to forget a reminder to never take from the entrusted property wrongfully. We pray that Allah SWT would ease all our affairs, firm our hearts with belief and sincerity in worshipping Him and bless all our deeds.