AL-KAFI #1615: WILL A PERSON BE CALLED BY THE NAME OF HIS FATHER OR MOTHER ON THE DAY OF JUDGEMENT? 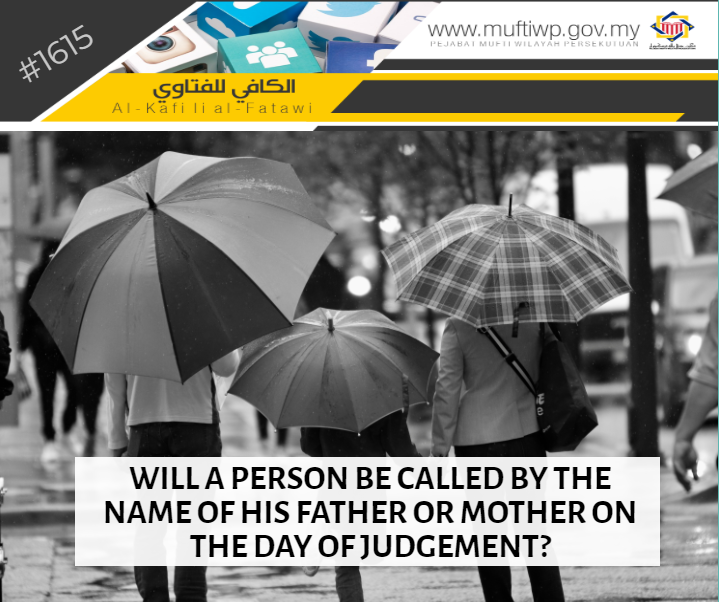 Assalamualaikum. I have a question. In the hereafter, will we be called by the name of our mother as recited in the talqin when a deceased is buried or after our father’s name? Hope for an explanation from you. Thank you.

On the day of Judgement, all creations are assembled where everyone will be held accountable for every deed that they did. On that day, each will receive punishment or reward from Allah SWT the God of the universe. Allah SWT states:

“The Day He will assemble you for the Day of Assembly - that is the Day of Deprivation. And whoever believes in Allah and does righteousness - He will remove from him his misdeeds and admit him to gardens beneath which rivers flow, wherein they will abide forever. That is the great attainment.”

On the Day of Judgement, Will a Person be Called After the Name of His Father or Mother?

The question which arises is on Judgement day where everyone is assembled, will a person be called by the name of his father or mother? Thus, to explain this matter further, we present a hadith narrated by Ibnu Umar RA, where the Prophet PBUH said:

"A flag will be fixed on the Day of Resurrection for every betrayer, and it will be announced (publicly in front of everybody), 'This is the betrayal (perfidy) so-and-so, the son of so and- so."

Imam al-Bukhari placed this hadith under the title “Will a person be called by the name of his father on Judgement day?”. When commenting on the hadith, Ibnu Battal said, the verse (هَذِهِ غَدْرَةُ فُلاَنِ بْنِ فُلاَنٍ) denies the claim that a person will be called by the name of his mother in the hereafter. Imam al-Qurtubi also stated the same in his book, where the hadith proves that people will be called with his name and his father’s name. (See Syarah Sahih al-Bukhari li Ibnu Battal, 9/335; al-Tazkirah bi Ahwal al-Mauta wa Umur al-Akhirah, pg. 699)

Imam Badruddin al-A’ini said the phrase (هَذِه غدرة فلَان) is specific for a person’s and his father’s name. The opinion of Ibnu Battal is recorded as indeed, when a person is called after the name of his father, then it is clearer and complete calling. (See Umdah al-Qari, 22/201)

Furthermore, in another hadith narrated by Abu al-Darda’ RA, the Prophet PBUH said:

“On the Day of Resurrection, you will be called by your names and by your father's names, so give yourselves good names.”

Thus, this depicts that the general evidence from the above-stated hadith that in the hereafter a person will be called with his and his father’s name.

This is as stated in a hadith narrated by Abu Umamah who said, if I die, do the following as instructed by the Prophet PBUH:

“When one of you passes away, level the soil of his grave. Then, another person should stand by his head, and say “O so and so (mother’s name).”

Imam Ibnu Hajar al-Asqalani said that the sanad of the hadith is good and there are syawahid. (See al- Talkhis al-Habir, 2/311)

Syeikh Abu Bakr Usman al-Dimyati in his book said that it is sunnah to perform talqin after the deceased is shrouded and this is the famous opinion and call the deceased by the name of his mother if it is known and if it is unknown, then call by the name of Saidatina Hawa (Eve) AS. Furthermore, the calling of a person by the mother’s name does not deny the call by the father’s name in the hereafter, the reason is the matter is a taufiqi matter (revealed). (See I’anah al-Talibin, 2/161)

May Allah SWT give us understanding in His commandments and guide us in performing worship with sincerity for Him. Amin.