AL-KAFI #1635: DONATING EXCESS FOOD FROM BUFFETS OR EVENTS TO TAHFIZ SCHOOLS OR INSTITUTIONS 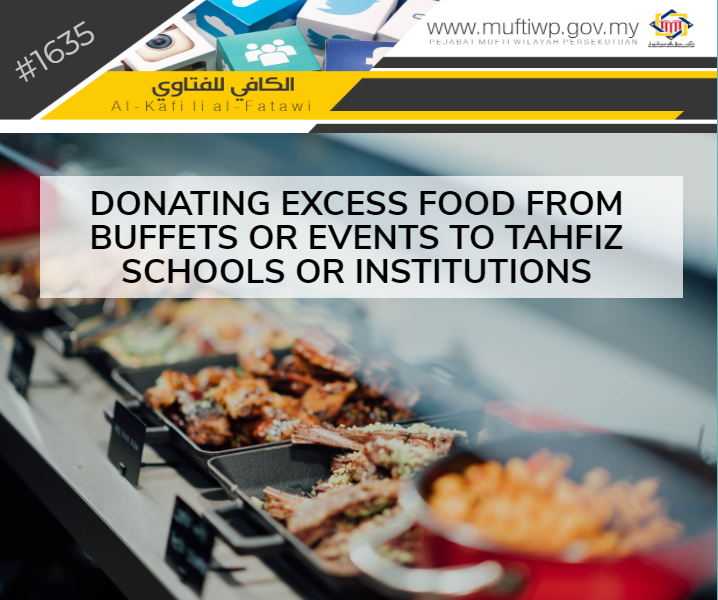 Assalamualaikum, I have a question. Nowadays, it has become a trend where we would donate excess food from gatherings or buffets to tahfiz centres. Sometimes, the food donated is already spoilt, however, they refuse to throw it and donate it to tahfiz schools. My question is, is this permissible? Hope for an explanation. Thank you.

The act of giving is a commendable and encouraged act in Islam. This is clear according to a hadith from Abu Hurairah RA, where the Prophet PBUH said:

Mursal narration by Malik in al-Muwatta’ (2/908). Ima Ibn Hajar al-‘Asqalani evaluate the sanad of the hadith as hasan in Kitab Bulugh al-Maram.

According to the question asked, we will start with the statement of Allah SWT:

“And do not aim toward the defective therefrom, spending [from that] while you would not take it [yourself] except with closed eyes.”

Imam al-Tobari commented that you should not purposely donate something of low quality, defected or inferior. (See Jami’ al-Bayan fi Takwil al-Quran, 5/560)

Syeikh al-Maraghi said you should not take from your property what is useless or defected to be donated. Why would you give defected goods for donation, when you yourself wouldn’t want to accept it, when you would feel disgusted, closing your eyes so that you would not see its defects? None would like such actions, except a person who no longer have a conscience and it contradicts the truth. You should know that defected goods will not be accepted by Allah SWT. A person will not do this, unless he is mindless. It’s not possible that the giver does not know the condition of the things he donated or he just pretends that he is ignorant of its condition. (See Tafsir al-Maraghi, 2/612-613)

According to Prof. Dr. Wahbah al-Zuhaili, the meaning of al-khabis here is first, unbeneficial matters. Second, something that is hateful to people. (See al-Tafsir al-Munir, 2/87)

“Never will you attain the good [reward] until you spend [in the way of Allah] from that which you love.”

Syeikh al-Maraghi stated the signs and attributes of a believer is a person who aspires to donate his beloved property in the path of Allah SWT with sincere and good intentions. Consequently, there are among you who intends to donate his defected and spoilt property of which he dislikes? This happens when a person has the love towards his property more than his love towards the blessings and rewards of Allah SWT. (See Tafsir al-Maraghi, 2/838)

Answering the above question, the original ruling of donating one’s property is sunnah and encouraged in religion. However, if the property that is intended for donation is defected or spoilt and could cause harm to the recipient such as spoilt rice, then it is haram and prohibited. This is in accordance with a hadith narrated by Ibn Abbas R.Anhuma, the Prophet PBUH said:

"There is no injury nor return of injury."

The act of donating is a commendable and honoured act in Islam. However, as a Muslim, we should first consider the property that is intended for donation and ensure that it is still usable and beneficial. Among our suggestions are:

As a conclusion, we would like to state that the act of donating is a commendable and encouraged act in Islam. The act of purposely donating property or food that could harm the recipient is haram and prohibited according to syarak. This can be observed through the Islamic legal maxim:

“Harm should be avoided.”

It should be understood that institution centres such as these are not a place to dump our waste or unwanted goods. This is a regrettable incident where donators make tahfiz centres as disposal centres for their unwanted goods.

Hopefully, this explanation will open our minds to help and respect one another in our society and daily lives. Amin.