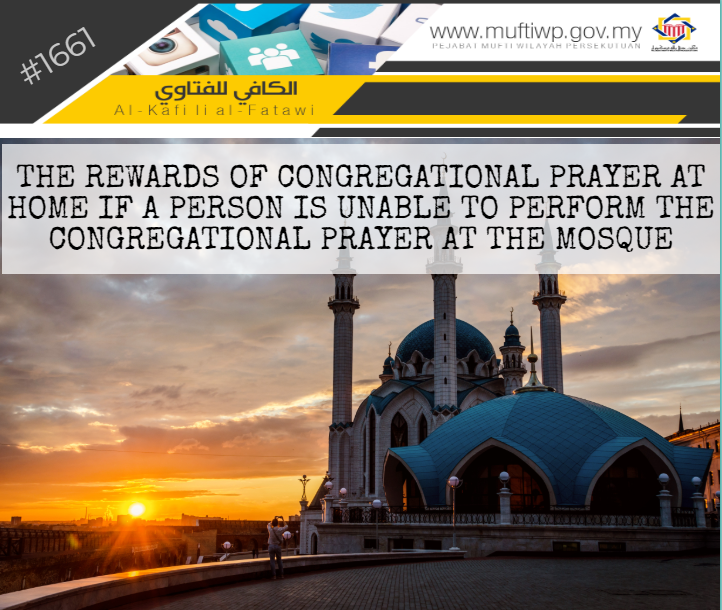 "Whoever hears the call and does not come, his prayer is not valid, except for those who have an excuse."

“It is fear or illness,”

Thus, it is clear that fear or illness are included as the excuse that exempts a person from attending the mosque for the congregational prayer.

Syeikh Mulla ‘Ali al-Qari in his commentary on the hadith said: “Fear for himself, his dignity or property.” He also cited another opinion as to what could lead to the fear: Fear against oppression that happens on himself, rain, extreme cold as well as avoiding impurity. Refer Mirqat al-Mafatih, Mulla ‘Ali al-Qari (3/839).

Coming back to the question presented, we would like to state that if a person always perform the congregational prayer in mosques or surau, then he is unable to perform it because of certain excuses and performs the congregational prayer at home, then he will receive the same rewards as though he performs it when he is able to do so. This opinion is according to the hadith narrated by Abu Musa al-‘Asy’ari, he said the Prophet PBUH said:

“When a slave falls ill or travels, then he will get reward similar to that he gets for good deeds practised at home when in good health.”

The above hadith shows that is a person is travelling or is sick, then there is a facilitation for him and he will receive the same rewards as if he is residing or healthy. For example, if a person sits to perform prayer because he is sick, then the rewards recorded for him is the same as though he performs his prayer standing. The reason is, if he is not sick, he would surely stand to pray.

Imam Ibn Hajar al-Asqalani in his commentary on the hadith states: “This hadith addresses the rights of those who are obedient but are prevented from doing so (due to some excuses permitted in syarak), while his intention will remain the same, if he is not prevented from it, surely, he would have continued doing so (continue in obedience).” Refer Fath al-Bari, Ibn Hajar (6/136).

To conclude, after we analysed the above evidences and arguments, we state the following:

Lastly, we pray to Allah SWT to be given the correct understanding in religion. Amin.