AL-KAFI #1698: THE RULING OF DISTANCING ONESELF FROM A FRIEND TO AVOID GETTING HURT BECAUSE OF HIS ACTIONS AND WORDS 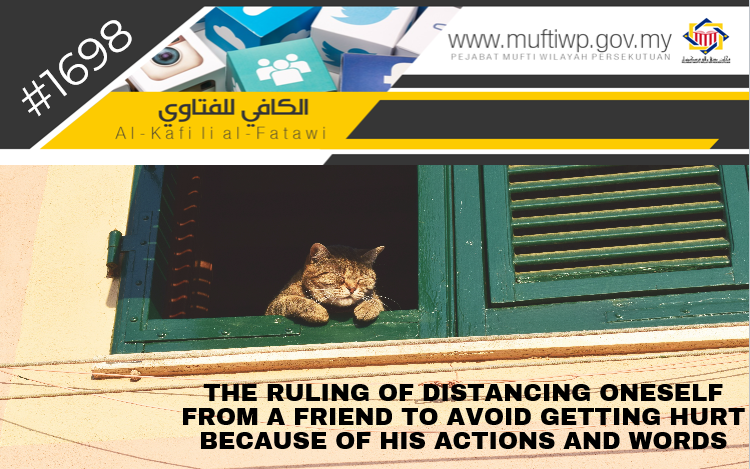 What is the ruling if we distance ourselves from a friend to avoid getting our feelings hurt because of his actions and words?

In this issue we should realize that every Muslim should protect his tongue from hurting his other Muslim brothers. In a hadith narrated by Abdullah Ibn ‘Amru R.Anhuma, he said, the Prophet PBUH said:

“A Muslim is the one who avoids harming Muslims with his tongue or his hands.”

Imam Ibn Battal in his commentary on the above hadith stated:

The above hadith states the commandment of avoiding any act that hurts or harms the Muslim ummah with his tongue, hands and everything that could hurt others.

Coming back to the above question presented, the act of distancing oneself from someone who hurts us through his actions or words is encouraged in syarak. This is stated in a hadith narrated by Mu’adz bin Jabal RA, where he said, the Prophet PBUH said:

“Five matters where if a person does one of them, then he will be protected by Allah SWT are; a person who visits the sick, accompanying the deceased to the grave, battle in the war for the sake of Allah SWT (jihad), went to meet a leader to honour and respect him, or a person who stays at home so that people would be safe from him (his tongue and hands) and he is also safe (from the evils of tongue and hands) of people.”

Narrated by al-Thabrani in al-Mu’jam al-Kabir (55)

We could also see that it is stated in the above hadith where the Prophet PBUH said: “… or a person who stays at home so that people would be safe from him (his tongue and hands) and he is also safe (from the evils of tongue and hands) of people.”

Thus, it implies that the act of staying at home is a form of socially distancing oneself from the harm that could happen to us at the same time preventing us from harming or hurting others.

Likewise, it is stated in a hadith narrated by Abu Musa al-Asy’ari RA, wherehe said the Prophet PBUH said:

"The example of a good companion (who sits with you) in comparison with a bad one, is like that of the musk seller and the blacksmith's bellows (or furnace); from the first you would either buy musk or enjoy its good smell while the bellows would either burn your clothes or your house, or you get a bad nasty smell thereof."

Imam Ibn Hajar al-Asqalani commented on the above hadith saying:

However, we would like to also suggest while it is encouraged for us to distance ourselves, at the same time we should advise the person to stop hurting others through his words or actions. Moreover, we should always pray to Allah SWT to protect our friendships and bless us with good friends.

Lastly, we pray that Allah SWT would give us all the correct understanding in religion. Amin.