IRSYAD AL-HADITH SERIES 160: CRIES WHEN LISTENING TO THE RECITATION OF THE QURAN 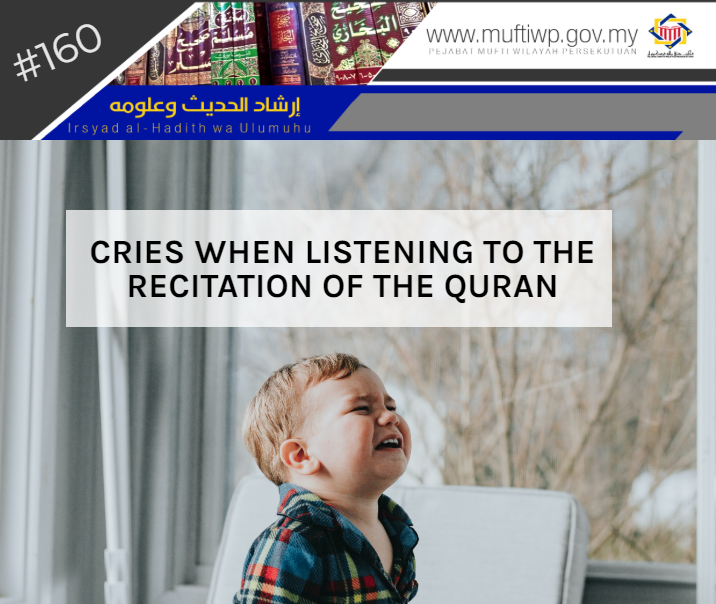 Assalamualaikum, is there a hadith which states that it is permissible to cry when listening to the recitation of the Quran?

Regarding the above question, Allah SWT commanded us to keep quiet when the Quran is being recited and this is clearly stated in the verses of the Quran:

“So, when the Qur'an is recited, then listen to it and pay attention that you may receive mercy.”

In this verse, Allah SWT commanded us to listen and stay silent, paying attention to the recitation of the Quran. Imam Ibn Kathir said that when Allah SWT stated that al-Quran is guidance for mankind and a hidayah and blessing Allah SWT also commanded us to keep quiet when the Quran is being recited honouring and out of respect for the Quran.

The Prophet (ﷺ) said to me, "Recite (the Qur'an) to me." I said, "O Allah's Messenger (ﷺ) Shall I recite (the Qur'an) to you while it has been revealed to you?" He said, "Yes." So, I recited Surat-An-Nisa' (The Women), but when I recited the Verse: 'How (will it be) then when We bring from each nation a witness and We bring you (O Muhammad) as a witness against these people.' (4.41) He said, "Enough for the present," I looked at him and behold! His eyes were overflowing with tears.”

Referring to the above hadith in al-Bukhari it is clear that the Prophet PBUH cried when he heard the recitation of Abdullah bin Mas’ud who is one of the great Companions who contributed in the field of al-Quran.

Among the stories of the salaf who are affected by the recitation of the Quran are:

“Abu Bakr is a man of tenderly feelings; as he recites the Qur'an, he cannot help shedding tears.”

“I heard the cries of Umar al-Khattab when I was in the last saf during the Subuh prayer and at the time he was reciting surah Yusuf.”

“Ibn Umar when reciting the Quran and reaches the verse: Has the time not come for those who have believed that their hearts should become humbly submissive at the remembrance of Allah and what has come down of the truth? [al-Hadid:16]. He cried till his beard is wet with his tears and he said: “O my Rabb! It’s true, the time has come.”

“I saw Ibn Abbas’s eyes were wet with tears.”

“I hear the sobs of Muhammad bin sirin at night when he was praying.”

“When praying at night, he would weep loudly until he passes out. When he comes around, his family would ask: “What makes you cry?” He wouldn’t answer and keep crying.”

“He once led prayer in a mosque, then he recited surah al-Muddathhir until verse 8 and 9 which means: “And when the trumpet is blown. That Day will be a difficult day. He weeps and fell to his grave.”

Crying in Prayer When Hearing the Recitation of the Quran

Before we present the opinions of scholars on the ruling of a person crying in prayer, we would first like to state that among the attributes of a believer of Allah SWT is when he hears His verses, then his heart would shudder and his faith would increase. This attribute is stated in Allah SWT’s holy book:

“The believers are only those who, when Allah is mentioned, their hearts become fearful, and when His verses are recited to them, it increases them in faith; and upon their Lord they rely.”

In madhhab al-Syafie if the cry exceeds the recitation of two letters (tangible/understood), then the prayer is invalidated except if the cry is involuntary, then it would not make a person to not be in the state of prayer. This is also stated in al-Mausu’ah al-Fiqhiyyah, al-Muktamad as well as the fatwa of former Mufti of Jordan Syeikh Nuh al-Qudhoh.

To conclude, as believers of the Quran we should always recite the Quran contemplating and understanding the literal and implicit meanings of the Quran. Thus, we will be able to be more humbled and focused in prayer as well as increasing our love for the Quran. The reason is Imam al-Nawawi stated in al-Tibyan that crying while reciting the Quran is among the attributes of the Arifin (those who know Allah) and syiar (signs) of His pious slaves. Likewise, Imam al-Ghazali said crying when reciting the Quran is encouraged. In Sunan Ibn Majah, there is a hadith which states:

“This Qur’an was revealed with sorrow, so when you recite it, then weep. If you cannot weep then pretend to weep,”

Lastly, may Allah SWT make us from among His slaves who love the Quran and that the Quran will be our intercessor in the hereafter. Amin.