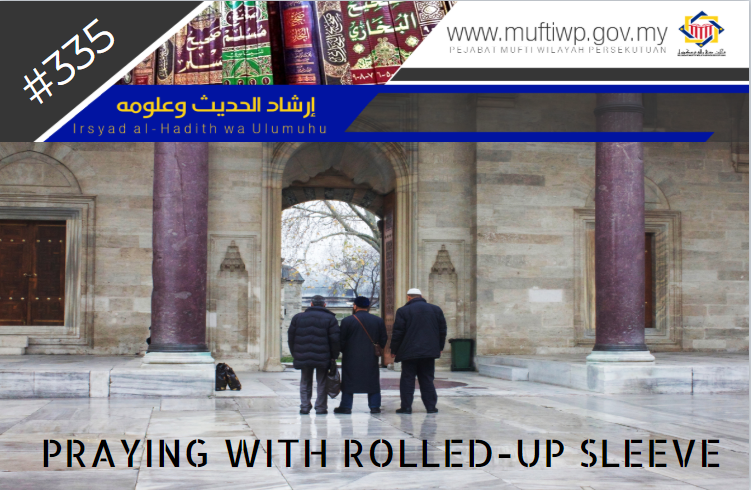 What is the meaning of this hadith?

"I have been ordered to prostrate on seven (bones) and not to tuck up the hair or garment."

According to the above question, the hadith is narrated by Imam al-Bukhari in his Sahih and also by Imam Muslim in his Sahih. Furthermore, this hadith is also narrated by other ashab al-Sunan such as Imam al-Nasa’ie and Ibn Majah in their Sunan. Thus, the status of this hadith is not doubted for its authenticity is agreed by the two imams (al-Bukhari and Muslim) and the status of hadiths such as this is from among the highest levels from among the sahih hadiths.

Moreover, there are many more similar hadiths like this:

"I have been ordered to prostrate on seven bones i.e. on the forehead along with the tip of the nose and the Prophet (ﷺ) pointed towards his nose, both hands, both knees and the toes of both feet and not to gather the clothes or the hair."

Hence, generally, the hadith prohibits a person from rolling up his clothes when prostrating is sahih, just that it should be understood as it is understood by the renown scholars. As for the meaning of this hadith, here we present several citations from scholars in understanding this hadith:

“Scholars have agreed that the restriction of praying with rolled up sleeves or other similar situations. The same for tied hair or the hair is placed under his turban or something similar. All of these matters are restricted according to the consensus of scholars and it is included as makruh tanzih (not a grave matter). If a person prays in this situation, then it has defected (the fadhilat of prayer), however, his prayer is still valid.” (See al-Minhaj Syarah Sahih Muslim, 209/4)

“The majority of scholars ruled it (rolling up one’s sleeves) makruh for a person who intends to pray, whether the action is in prayer or before praying. They also agreed that it does not harm (invalidate) the prayer.” (See Fath al-Bari, 296/2)

“And makruh for a person who is praying to tie or gather his clothes when prostrating or others without any necessity to do so.” (See Asna al-Mathalib, 162/1)

“Rolling up one’s clothing in prayer is makruh according to the majority of scholars, this is in accordance with what came from the Prophet PBUH regarding the restriction of gathering one’s clothing and hair.” (See al-Mawsu’ah al-Fiqhiyyah al-Kuwaitiyyah, 34/12)

Furthermore, among the wisdoms of this restriction is to ensure that all of these are together in prostration as stated by Imam Zakaria al-Ansari in his book Asna al-mathalib. Besides, there is also another wisdom as stated by al-Hafiz Ibn Hajar al-Asqalani:

“The wisdom behind it is when a person raises his clothing or hair from touching the floor (place for prostration) is just like a takabbur (arrogant) person.” (See Fath al-Bari, 296/2)

Hence, we conclude that rolling up one’s clothing when praying regardless of whether it is for his trousers or shirt is makruh according to the above hadith. This matter is also stated in the book al-Mu’tamad of which it is stated that purposely rolling up one’s sleeves to pray or beforehand (before praying) for other purposes and the person prays in this state without any desperate need to do so, then it is makruh according to the consensus of scholars and it is categorized as makruh tanzih. Whoever prays in this state, then he has committed something that is makruh but his prayer is still valid. (See al-Muktamad, 321/1)

To conclude, we would like to reaffirm that rolling up one’s clothing in prayer is makruh tanzih (not a grave makruh) and if a person prays in this state, then his prayer is valid and it is unnecessary to qadha his previous prayers (prayer performed with rolled-up sleeves or trousers). Lastly, may Allah SWT give us understanding in practising this religion in accordance with the will of Allah SWT and the prophet PBUH. Amin.