IRSYAD AL-HADITH SERIES 399: A DECEASED WILL BE HEAVY IF HE LIKES TO LIE DOWN WHEN THE ADHAN IS CALLED WHILE HE WAS ALIVE? 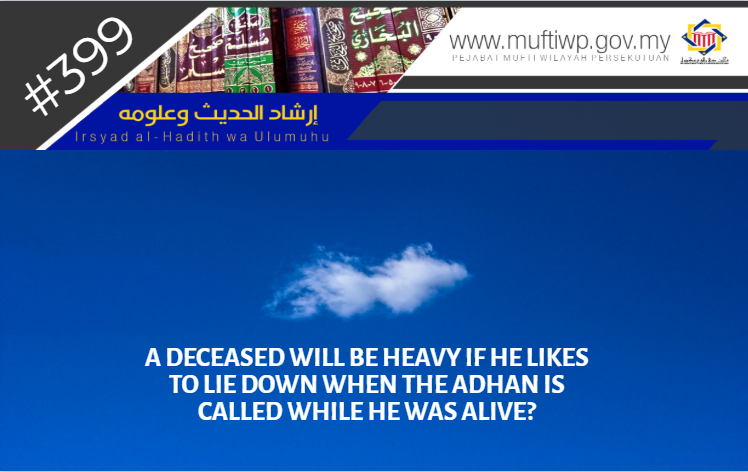 Assalamualaikum ustaz. Is it true that if a person lies down when the adhan is being called his body will be heavy when he passed away? Hope for an explanation from you. Thank you ustaz.

The adhan is one of the eminences of Islam and should not be neglected. It is called out every time for the obligatory prayer. The words in the adhan are words calling Muslims towards tauhid. Summoning them to prayer and to the success of this world and the hereafter.

Coming back to the question asked, there is a hadith that commands us to get up when the adhan is called. The hadith states:

“If you hear the adhan then get up. It is the right and obligation from Allah.”

The following are the details of the narrators who narrated this hadith:

In short, we are inclined to state that this hadith is fake for in the sanad (chain of narrators), there is al-Walid bin Salamah. He is considered as a liar by most scholars of ‘ilal and Jarh wa al-Ta’dil.

Moreover, hadiths which state that whoever lies down when the adhan is called, then his body would be heavy after he died are all fakes. This has been stated by Sheikh Ali Al-Halabi when he was asked regarding hadiths which restrict lying down when one is listening to the adhan.

Although it is not an offense to listen to the adhan while lying down, we are encouraged to answer the call of the adhan. This is in accordance with a hadith from Abu Sa’id al-Khudri, where the Prophet PBUH said:

"When you hear the adhan, repeat what the muadhdhin says."

More than that, when one hears the adhan, then he should hasten in preparing himself to go to the mosque to perform the congregational prayer. There are numerous benefits from it. One of them is stated by the Prophet PBUH in a hadith narrated by Abu Hurairah RA. The Prophet PBUH said:

He who purified himself in his house, and then he walked to one of the houses of Allah for the sake of performing a Fard (obligatory act) out of the Fara'id (obligatory acts) of Allah, both his steps (would be significant) as one of them would obliterate his sin and the second one would raise his status.

May Allah SWT bless us with guidance to practise Islam in every aspect of our lives.