IRSYAD AL-HADITH SERIES 517: UNDERSTANDING THE HADITH ‘HABBATUSSAUDA’ (BLACK CUMIN) IS A REMEDY TO ALL ILLNESSES’ 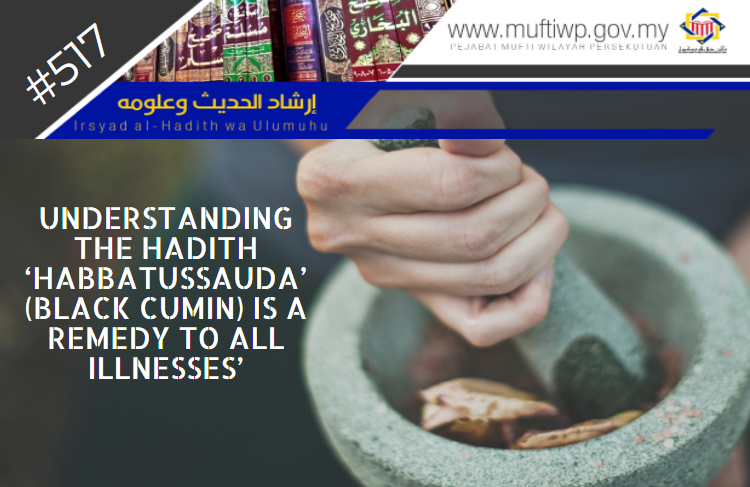 Is it true that the hadith stating habbatussauda’ is the remedy for all illnesses, on the phrase kullu “كل” (all), it only refers to some diseases?

Based on the explanation from the scholars upon this hadith, it can be understood that the phrase “the remedy to all illnesses” refers to certain illnesses only. This aligns with the condition and situation of that time. Therefore, it is inaccurate to understand that the phrase “كل” (all) literally because it may cause confusion.

This question arises due to some narrations of hadith regarding habbatussauda’. Among them is hadith narrated by Aisha R.A:

This black cumin is healing for all diseases except As-Sam.' Aisha said, 'What is As-Sam?' He said, 'Death’.

If this hadith is understood literally, then all existing illnesses may be cured by only using habbatussauda’. However, we should know that not all hadith can be understood literally. When this hadith is not comprehended rightly, it may cause misunderstanding and confusion. Normally, misunderstanding towards this hadith occurs on the phrase “the remedy to all illnesses”, to the extent that the society thought that it is able to cure all illnesses except death.

According to Ibn Hajar al-‘Asqalani, habbatussauda’ able to refrain diseases due to chilliness. Among them is when habbatussauda’ is crushed and put in a cloth until it produces the aroma. The aroma may help to treat people with flu due to cold weather. Besides, habbatussauda’ cooked with vinegar as a mouth gargle may reduce toothache. [1]

That’s how vast is the benefits of habbatussauda’ to humans as mentioned in the commentary books on hadith. However, this does not mean habbatussauda’ may cure all illnesses in the world.

In explaining this phrase, Ibn Hajar al-‘Asqalani cited the opinion of al-Khattabi which states that the phrase “a remedy to all illnesses” is a phrase with general indication, but carries a specific meaning. This is because according to Imam al-Khattabi, there is no single plant created by Allah SWT in this world which carries all sorts of benefit for medical purposes. [2]

While Ibn Battal and Abu Jamrah stand with the general meaning of the hadith, but treatment using habbbatussauda’ differs according to the illness. [4]

However, the scholars have different opinions in stating how habbatussauda’ functions. Some state that it can only be used to treat illnesses with cold features. While some said it can be used to treat illnesses due to cold or hot factors. While others hold the opinion by the general meaning of the hadith, but with some specific conditions. They all differ in one aspect, but all opinions meet in one point which is habbatussauda’ stated in this hadith is not the remedy to all illnesses.

In fact, in al-Quran, there are forms of “كل” (each) which does not carry the meaning of each, all or every. Allah SWT says in the Quran:

As for the ship, it belonged to poor people working at sea. So, I intended to cause a defect in it as there was after them a king who seized every [good] ship by force.

Al-Wahidi in his book al-Tafsir al-Basit states that ‘seizing every ships’ refers to good ships only. [5] Therefore, the phrase “كل” (every) in the verse shows that not all ships were seized by the king, but only the good ships will be seized by him. Besides, in another verse, Allah SWT says in the Quran:

Indeed, I found [there] a woman ruling them, and she has been given of all things, and she has a great throne.

In the same tafsir, al-Wahidi states that Ibn ‘Abbas and Muqatil said: “has been given to her of all things” in this verse means it has been given to her all of the world treasures consist of wealth, army and knowledge. [6] This shows that the phrase “كل” (every) in this verse refers to a specific meaning and not general in which it is specified to those three treasures.