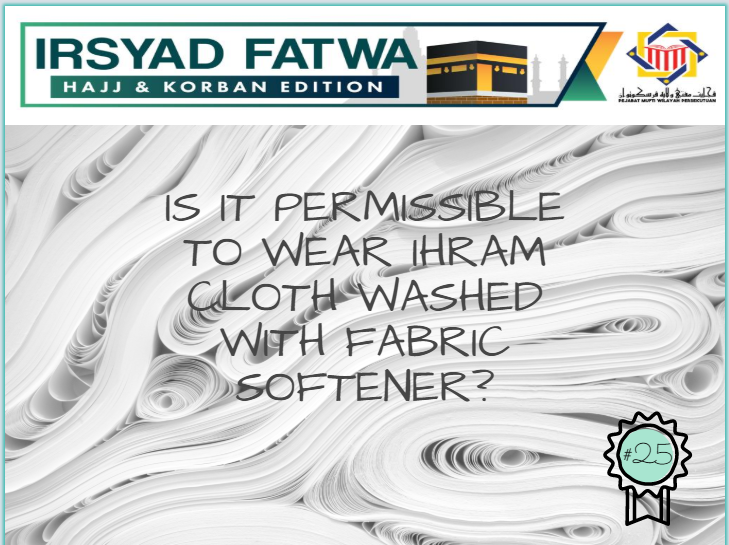 Assalamualaikum Ustaz. For ihram cloth and clothes worn for prayers washed with softener; are they permitted to be worn during ihram, or is it necessary to wash it again? I am aware that if I wear the ihram cloth without setting the intention for ihram yet, then the restrictions of ihram are not yet applicable to me. However, after I am in the state of ihram, then my ihram cloth becomes dirty and I want to change it with another new cloth which was washed by using softener (scented), then, is it permissible or prohibited?

Restricted Acts While in the State of Ihram

After setting the intention of ihram, one is under its restrictions. This is already set by Syarak, and if one goes against it, he is to pay for the dam according to types of restricted acts he committed.

Applying fragrances holds a specific restriction during ihram due to the syarak. According to Shafi’ite scholars, what is meant by fragrances are anything that has a sweet and good scent.

Its prohibition is absolute. Whether it is used on the ihram cloth, sleep place or even in shoes. If there are any fragrances in his shoes, it is obligatory (wajib) for him to cleanse it. (Refer: al-Mausu’ah al-Fiqhiyyah al-Kuwaitiyyah, 2/161)

Imam Ramli suggested that: “What is meant by prohibited acts regarding applying fragrances is its usage for the purpose of perfume only”. (Refer: Hasyiah Qalyubi wa U’mairah, 2/168)

However, if it is for the purpose of purifying one’s body with scented soap, it is not under the prohibition of ihram. Dr Wahbah al-Zuhaili stated in his book:

“And it is not prohibited according to Shafi’ite scholars for a person to cleanse his body and head using soap without any riddance of hairs. And it is still prioritized to not do it”. (Refer: al-Fiqh al-Islami wa Adillatuhu, 3/2297)

“After setting the intention of ihram, it is permissible to take a bath, get changed with the new ihram cloth, applying soap in the purpose of cleansing even if it is scented. This is because soap is not listed under fragrances. However, the usage of non-scented soaps is prioritized”. (Refer: Dar Ifta’ Misriyyah, No 3308)

However, if it is done before being in the state of ihram, then it is sunnah to do so. This is the opinion of the majority of the jurists (fuqaha’), as stated in hadith narrated by A’isha RA:

I used to apply perfume to the Messenger of Allah (ﷺ) before his entering upon the state of Ihram and at the conclusion of it, before circumambulating the House (for Tawaf Ifada)

Reviewing the above question and fuqaha’ opinions in regards to this, it is concluded that using scented ihram cloth (being washed by using softener) after setting the intention for ihram is prohibited and the person should pay for the dam (takhyir and taqdir). This is because the usage of softener here is in the purpose of fragrance.

“Usage of scented wet tissues and softener is in the purpose of fragrance, and it is prohibited to do during ihram”. (Refer: Fiqh Ibadat Haji, Umrah dan Ziarah, page 214)

Hence, it is prioritized to wash the cloth first to remove the fragrance before wearing it.

May we are given with true understanding in performing acts of worship to Allah SWT.