IRSYAD AL-FATWA SERIES RAMADHAN EDITION 107: THE RULING OF GIVING FOOD TO NON-MUSLIMS DURING THE DAY IN RAMADHAN 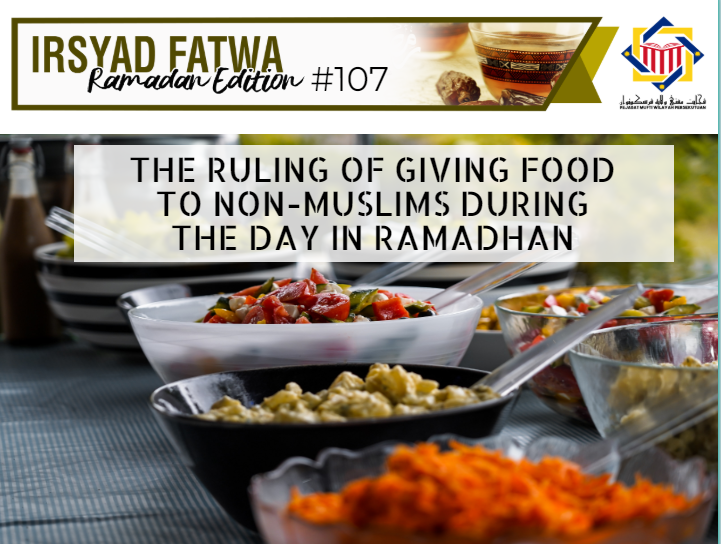 I’m a warden at a school. Every morning rather than throwing the leftover food from sahoor in Ramadhan, I would bring the food to my friend’s school (non-Muslims’ school) and Muslim women who are not fasting (menstruating) so that they can eat it. However, is this considered as me acting as an accomplice towards sin because it is as though I am encouraging them to not fast?

Giving or providing food to women who are excused from fasting is permissible without khilaf (difference of opinions by scholars) during the day in Ramadhan for they are included as those who are not obligated to fast, for example, menstruating woman and pregnant woman when it is feared that her fasting would affect the health of her baby.

As for giving food to non-Muslims during the day in Ramadhan, there is a difference of opinions among scholars and it is divided into two:

The Opinion That Ruled It Prohibited

Among their arguments is that the non-Muslims are also subjected to syara’ rulings and when we give them food during the day in Ramadhan, then we are helping them in matters of sin. However, they emphasized that if there is non-Muslims eating, we are not allowed to restrict or prohibit them from doing so.

The Opinion that Ruled It Permissible

Are Non-Muslims Commanded to Fast?

However, according to Syeikh Zakariyya al-Ansari, the sanction means they will be held responsible in the hereafter for their refusal to embrace Islam and fulfil the commandments of syara’ because even if they did perform the worship, their worship would be invalid and unaccepted for one of the valid conditions of worship is a person must be a Muslim. (See Asna al-Mathalib fi Syarh Raudh at-Thalib, 1/121)

In this issue, it is also interesting to look at a hadith from Ibn ‘Umar R.Anhuma:

This became the argument that although non-Muslims are all in truth subjected (mukhatab) to syara’ rulings, however, these rulings are not applicable for them in this world and they will be held accountable in the hereafter.

“…but do not cooperate in sin and aggression.”

The above verse is inapplicable in this case for non-Muslims and Muslim women who has permissible excuses are not meant to be fasting. Thus, giving them food although it is during the day is not considered as helping in transgression and is even considered as a charitable deed according to the concept of ihsan, ukhuwwah and benevolence.

Islam also strictly prohibits being excessive and wasteful which is stated through the hadith of the Prophet PBUH:

To conclude, in our opinion, giving food to the non-Muslims and menstruating women during the day in Ramadhan is PERMISSIBLE on the basis of helping each other in goodness. However, we would also set several conditions and guidelines:

It is best if they are also invited during the time we break our fast, as we have explained on the permissibility in our article titled The Ruling of Inviting Non-Muslims to Break Fast. (Can be accessed through the link https://bit.ly/2sqE5WT)

Furthermore, this act is also a form of dakwah to our non-Muslim brothers in showcasing our love and care which is encouraged in Islam. Thus, the questioner’s initiative is commendable and should be an example to us all. This action cannot be considered as tainting the honoured month of Ramadhan for the act itself is a manifestation of the attribute of blessing and taqwa that is emphasized in Islam and an objective that should be fulfilled in the month of Ramadhan. Lastly, it is wajib to avoid any form of wastefulness.