IRSYAD AL-FATWA SERIES RAMADHAN EDITION 117: DID THE PROPHET PBUH AND HIS COMPANIONS FAST WHILE THEY WERE IN BATTLE? 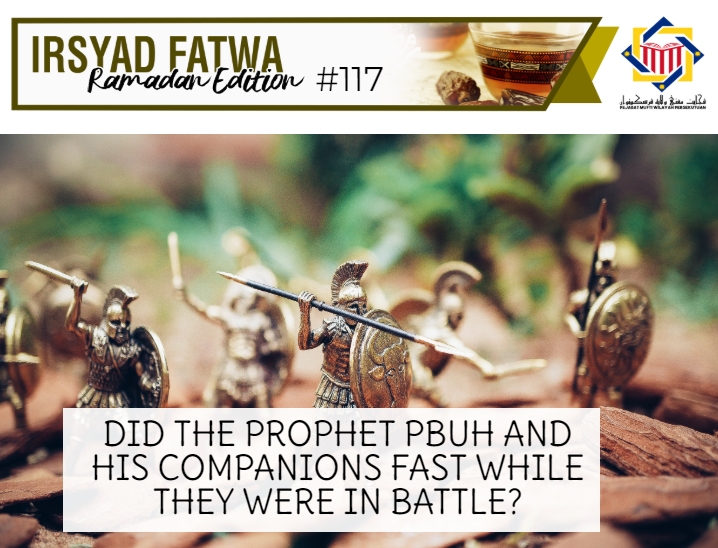 We will start with the definition of fast. Lexically, fasting means abstaining oneself from doing something such as eating, drinking and talking. This is based on the narration about Mary AS stated by Allah SWT in the Quran:

“Indeed, I have vowed to the Most Merciful abstention, so I will not speak today to [any] man.:

Whereas, according to syara’, fasting means abstaining oneself from anything that invalidates it starting from when the sun rises until the sun sets preceded by the intention to fast. (See al-Fiqh al-Manhaji, 1/59)

Answering the above question, we cite the following hadith narrated by Abu Sa’id al-Khudri RA, where he said:

“We travelled with the Messenger of Allah (ﷺ) towards Mecca and we had been observing fast. We halted at a place. There the Messenger of Allah (ﷺ) said: You are nearing your enemy and breaking of fast would give you greater strength, and that was a concession (given to us). But some of us continued to observe the fast and some of us broke it. We then got down at another place and he (the Holy Prophet) said: You are going to encounter the enemy in the morning and breaking of the fast would give you strength, so break the fast. As it was a point of stress, so we broke the fast.”

Imam al-Munawi said: It can be concluded that the excuse to break the fast is not due to travel but because the proximity of the enemy and they would need all their energy and optimum strength to fight in the path of Allah SWT. Although they were residing in a state (not travelling), it is still permissible for them to break their fast to maintain their stamina and strength to face their enemies. (See Faidh al-Qadir, 2/555-556)

In another narration, Saidian ‘Umar al-Khattab also narrated the same matter. He said:

"We fought in two battles along with the Messenger of Allah during Ramadan; the Day of Badr, and the Conquest (of Makkah), so we broke our fast during them."

It is narrated that some of the companions of the Prophet PBUH said:

“I saw the Prophet (ﷺ) commanding the people while he was travelling on the occasion of the conquest of Mecca not to observe fast. He said: Be strong for your enemy.”

Al-Hafiz in al-Talkhis al-Habir (2/449) said this hadith is evaluated as sahih by al-Hakim and Ibn Abd al-Bar. This hadith also mentioned the commandment of breaking one’s fast not because of travel but to increase one’s strength when going into battle.

Hopefully, we are able to realize the commandment of Allah SWT:

“And whatever the Messenger has given you – take; and what he has forbidden you – refrain from.”