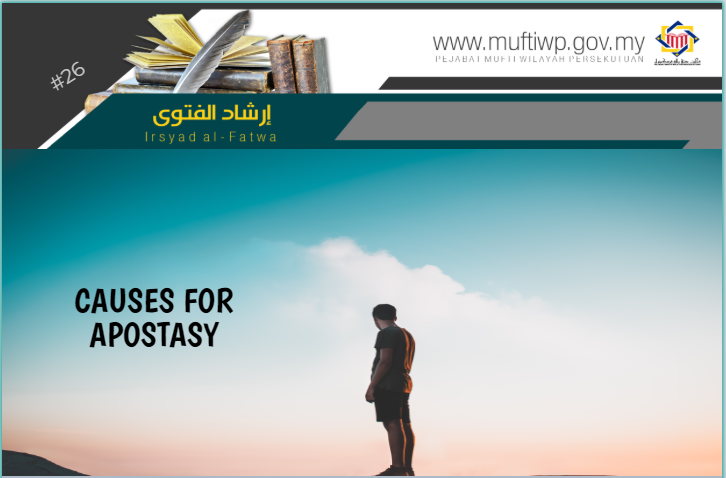 What are the reasons and causes of apostasy?

I will divide my answer for the above question into two divisions:

First: The reasons for apostasy

Second: The causes of apostasy

Pertaining to the reasons for apostasy, it may be due to the four following reasons:

However, for those who reject rulings which do not have the consensus of scholars, or agreed upon but not generally known may not result in apostasy. For example, those who reject the sanctioning of Dhuha prayer or the prohibition of marrying a divorced woman who does not complete her ‘iddah period yet.

There was an incident where Sayyidina Umar RA wrote a letter to Abu Ubaidah RA about a group of people who consumed intoxicants by interpreting the saying of Allah SWT:

He then included in his letter, asking Abu Ubaidah RA to advise them and if they still defended their opinion saying that it is permissible based on their wrong interpretation of the above verse, then Abu Ubaidah RA should kill them. Conversely, those who believe that the ruling is haram (prohibited), but still drink it anyway, then they should be whipped 80 times. Then, Abu Ubaidah brought them into judgement in front of some witnesses, they answered that it is haram. So, Abu Ubaidah punished them by 80 whippings, where they regretted their actions afterwards. Refer Mahasin al-Takwil by al-Qasimi (6/368).

These utterances could lead to apostasy regardless if it is due to his belief, anger or disobedience, insulting the religion or Allah SWT out of anger, in an argument or mockery, whether it is just for the sake of making people laugh, as a joke or taunt. For example, a person telling his friend who offers him advice by saying: “Later when you enter Paradise, close the door and don’t let me in,”

This is in accordance with the statement of Allah SWT in the Quran:

And if you ask them, they will surely say, "We were only conversing and playing." Say, "Is it Allah and His verses and His Messenger that you were mocking?" (65) Make no excuse; you have disbelieved after your belief. If We pardon one faction of you - We will punish another faction because they were criminals. (66)

Based on the above statement, it is clear that those who commit these are no longer a Muslim, could lead to dianatan (by religion) apostacy, not qada’an or by court (through adjudication of a judge). Still, the author would like to state here that the scholars are cautious in ruling that a person has renounced Islam and become an apostate. The following are some of the opinions of shcolars:

Second: The Causes of Apostasy

Based on our observation, there are bunch of causes that lead to apostasy which are listed as follows:

May Allah protect us all from any means that could lead us towards apostasy and I pray to Allah SWT for us to always be guided with His Taufiq and hidayah. Ameen.