IRSYAD AL-FATWA SERIES 327: THE RULING OF HAVING WEDDING PHOTOSHOOT IN A CEMETERY 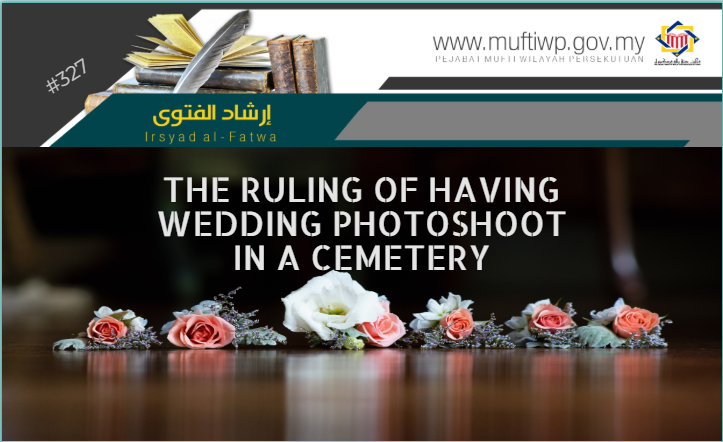 Assalamualaikum ustaz. I have a question on the latest viral issue where there are newlyweds who decided to have their wedding photoshoot in a Christian cemetery. This issue causes chaos in the media. What makes it more detestable is their claim that they did it to be different and for fun. What is your opinion on this? Hope for an explanation from ustaz. Thank you.

Before we answer the question presented, we would like to first explain that visiting graves is permissible whether they are Muslims or not. This is an opinion presented by Imam al-Nawawi. He stated that it is permissible for a Muslim to follow the funeral procession of his friends or relatives, the same is for the ruling of visiting their graves. He (Imam al-Nawawi) stated that this is the opinion of the majority of the scholars. (Refer: Al-Majmu’ Syarh Al-Muhazzab, 5/144).

In fact, the purpose of the visit is none other than to remind us about death which will surely be experienced by every human being. This is in accordance with a hadith of the Prophet PBUH where he said:

The Messenger of Allah said: "I had prohibited you from visiting the graves. But Muhammad was permitted to visit the grave of his mother: so visit them, for they will remind you of the Hereafter."

This gives the meaning that the purpose of visiting is not merely for fun and leisure. Instead, it is supposed to remind us of the hereafter and death which are coming.

The same goes for when visiting graves, there are manners that one should be mindful of. Among them are:

If the graves are of non-Muslims, then it is prohibited to give salam and supplicating for them.

"It is better that one of you should sit on live coals which would burn his clothing and come in contact with his skin than that he should sit on a grave."

There are many other manners when visiting graveyards like it is impermissible to utter bad words, not doing any actions that may lead to fitnah and others, which is unnecessary for us to explain this time.

Coming back to the question raised, we view that the action of having wedding photoshoot at a Christian cemetery for fun and to be different or unique is impermissible and may lead to fitnah. In fact, it contradicts with the excerpts of the Quran and Sunnah which commanded us to show our respect towards the cemetery and the deceased even if they are not Muslims. This is in accordance with Allah SWT’s saying:

“And We have certainly honored the children of Adam,”

We view that the action of having wedding photoshoot at the cemetery of non-Muslims posing in different poses is an insult towards the deceased buried there and worse, may hurt the feelings of the family.

The Prophet PBUH once said:

“Breaking a dead man's bone is like breaking it when he is alive.”

Maulana Sheikh Syamsul Haq ‘Azim Abadi cited the opinion of al-Tibi upon this hadith. “Al-Tibi said that it is impermissible to insult the dead by any means. An insult towards the dead is like an insult towards him when he was still alive.” (Refer: ‘Aun Al-Ma’bud Syarh Sunan Abi Daud, 14/27).

This indicates that any form of insult and degradation towards the deceased either by actions or words are impermissible. Not to mention posing and taking pictures which are not supposed to be done in a cemetery. This can be considered as a form of insult.

In addition, what we should observe is the effects of our doings. The actions, if viewed upon further, may anger the Christians which ultimately lead them to do the same thing in Muslims’ cemeteries. This may best be understood through the saying of Allah SWT:

“And do not insult those they invoke other than Allah, lest they insult Allah in enmity without knowledge.”

So, what we can understand from this verse is it is impermissible to do or say anything that insults them. These actions may anger them and they may respond by doing the same to us.

We already know that the Christians have their own rituals and rites when attending a funeral and visiting the cemetery. We should respect this the same way as we expect from them to respect Islam.

To conclude, we would like to emphasize here that the incident of having wedding photoshoot at a Christian cemetery which has become viral recently is a prohibited act. Just because of a person’s desire to be different should not be an excuse to do something that could lead to fitnah and anger of others, especially if it is done just for fun. Search for other appropriate places for the event. Such actions could shed a negative light on Islam and its followers at the same time distancing people of other religions from Islam.

May Allah give us the correct understanding in this religion. Wallahua’lam.