IRSYAD AL-FATWA SERIES 330: THE RULING OF WOMEN ON MENSES PERFORMING ABLUTION BEFORE BED 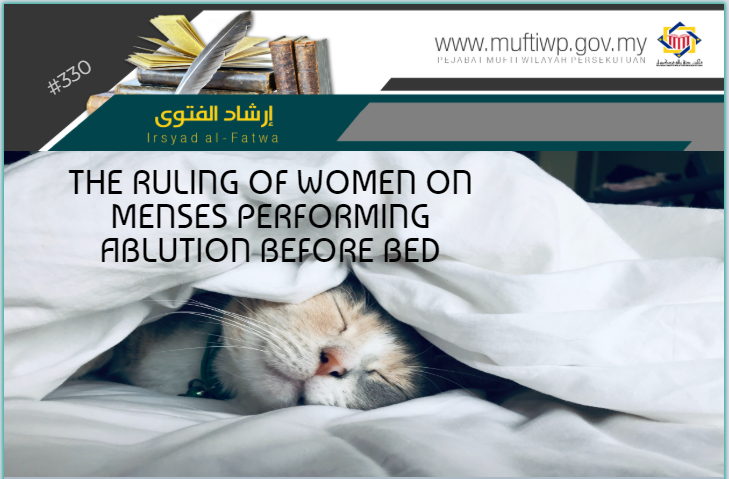 “O you who have believed, when you rise to [perform] prayer, wash your faces and your forearms to the elbows and wipe over your heads and wash your feet to the ankles. And if you are in a state of janabah, then purify yourselves.”

Besides, the Prophet PBUH also encourages his ummah to perform ablution for actions other than worship such as sleeping, eating, when one is angry and etc. This is stated by Sheikh Abdullah Ibn Abd al-Rahman Bafadil al-Hadramiy in his book of al-Muqaddimah al-Hadramiyyah through his words:

It is sunnah to perform ablution for cupping, nose bleed, drowsiness, sleeping while in a stable position, vomit, cough while praying, when someone ate something grilled or camel’s meat, in doubt whether he is in the state of hadas or not, ghibah, backbiting, lying, insulting others, uttering bad words, angry, intending to sleep, reading al-Quran and hadith, doing dhikr, sitting in a mosque, passing a mosque, studying, visiting graves and carrying and touching a deceased. (Refer al-Muqaddimah al-Hadramiyyah: 37)

The same is stated in a hadith narrated by al-Bara’ bin ‘Azib R.Anhuma, where the Prophet PBUH said:

"Whenever you go to bed perform ablution like that for the prayer, lie on your right side”

Whenever the Messenger of Allah (ﷺ) had sexual intercourse and intended to eat or sleep, he performed the ablution of prayer.

Ibn Rajab al-Hanbali upon commenting on this hadith in his Fath al-Bari, he said

Many scholars are of the opinion that when someone is in janabah state (before taking obligatory bath), then he should wash his private parts and take ablution. (Refer Fath al-Bari Li Ibn Rajab, 1:357)

Taking ablution for those in janabah state will not remove hadas from the person, but makes it lighter. This is because the Prophet PBUH told us that that the angels of blessing will not come close towards those who do not take a bath or ablution while in major hadas. The Prophet PBUH says:

“The angels do not come near three: the dead body of the unbeliever, one who smears himself with khaluq, and the one who is sexually defiled except that he performs ablution.”

However, the scholars differentiate between those in janabah state and those on menses and nifas (post-partum bleeding). This is because menstruation and postpartum bleeding are prolonged hadas and will not be lifted merely due to obligatory bath if the woman is in either state. While for those in janabah, then the hadas will be lifted due to obligatory bath. Thus, it is sunnah to take ablution only to those who are in janabah state and not for women on menses and postnatal bleeding.

“If a woman is on her menses, then it is haram for her to do actions of taharah. This is because, haid will obligate the woman to purify herself. Whatever obligates purification, then it will forbid its validity as long as a person stays in the particular state such as when one is urinating. (Refer al-Majmu’ Syarh al-Muhazzab, 2:382)

Imam al-Nawawi cited from the book of Musykilat al-Muhazzab in commenting on the above text explaining what is meant by the prohibition of a woman on menses to purify herself into two interpretations:

Nevertheless, in the situation of the questioner here, if she takes ablution not with the intention of lifting the major hadas or as a form of worship (ta’abbud), like intending to purify herself and cooling herself only (tabarrud) for example, then her action is not sinful. This is stated by Imam al-Nawawi through his words:

“If one only washes the obligatory parts of body for ablution, then it is not sinful without khilaf.” (Refer al-Majmu’ Syarh al-Muhazzab, 2:382)

This is because it is analogically deduced (qiyas) with other sunnah purification actions, which is not intended as worship and lifting hadas like sunnah bath for women on menses to do ihram, wuquf, and stoning of al-jamarat. In this matter, Imam al-Nawawi said:

Sunnah acts of worship with the intention of purifying oneself, like taking bath for ihram, wuquf and stoning in al-jamarat are sunnah for the women on menses without khilaf. (Refer al-Majmu’ Syarh al-Muhazzab, 2:382)

Besides, Imam al-Nawawi also states the agreement of the Shafi’ite scholars that it is not sunnah for women on menses and postnatal bleeding to take ablution. However, if their menstruation has ended, then the situation is the same of those in janabah state, where it is sunnah for them to take ablution. He said:

The Shafi’ite scholars agreed that it is not sunnah for women on menses and postnatal bleeding to take ablution (before sleeping). This is because ablution does not affect both hadas. However, if menstruation stops, then she is of the state of those in janabah (where it is sunnah for them to take ablution). (Refer al-Minhaj Syarh Sahih Muslim, 3:218)

Based on the above discussion and judgements, we would like to conclude that the ablution of a woman on menses and postnatal bleeding is invalid and it is prohibited and sinful if she performed it with the intention of worship and lifting the hadas. This is because her wudhu’ does not affect both major and minor hadas and it is feared to be considered as an act of mocking the religion.

Hence, if the questioner intends perform ablution just as a part of her usual routine, then she should set intention of cleaning and cooling herself. This is permissible. Likewise, if her menses ended, then her condition is of the those in janabah. So, it is sunnah for her to take ablution while a bath is obligatory. Hopefully, the actions following the guidance of the Prophet PBUH in purifying oneself be rewarded from Allah SWT. InshaaAllah.