IRSYAD AL-FATWA SERIES 564: THE RULING OF A WIFE REDHA HER HUSBAND BECOMING A TRANSVESTITE (MAK NYAH) 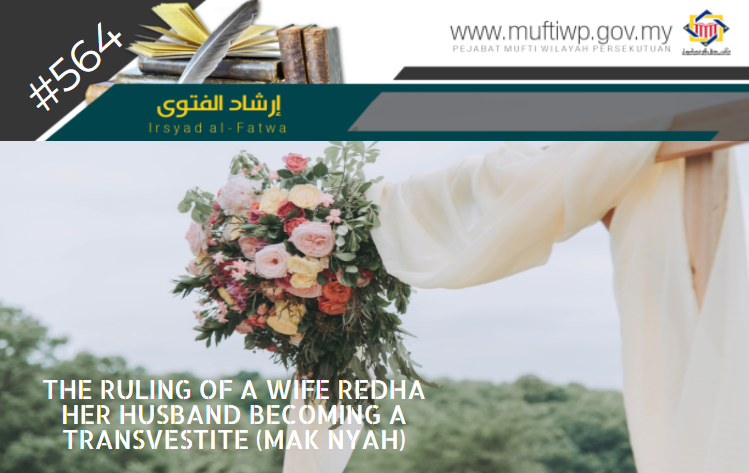 Assalamualaikum wbt. What is the ruling of a wife redha her husband becoming a transvestite (mak nyah)?

The ruling of tasyabbuh or a man resembling a woman and vice versa is HARAM, and even one of the major sins deserving the wrath of Allah SWT. While a wife who redha her husband committing haram actions will also bear the sin. A wife shall not redha on evildoings and actions prohibited in the religion. A wife should also advise her husband to leave wrongdoings.

According to Ibn Manzur, tasyabbuh is an object resembling or imitating another. (Refer Lisan al-Arab, 7/24)

In Fiqh discussion, tasyabbuh brings about the meaning of imitation in the following matters:

Tasyabbuh is HARAM and even one of the major sins as it is stated in al-Quran and hadith that Allah SWT curse those who did so. Among the dalil of prohibition of tasyabbuh is the verse:

Through another verse, Allah SWT says:

So, direct your face toward the religion, inclining to truth. [Adhere to] the fitrah of Allah upon which He has created [all] people. No change should there be in the creation of Allah. That is the correct religion, but most people do not know.

While there are many hadiths mentioning men wearing women’s clothes or resembling (tasyabbuh) the women as stated in the Prophetic hadith narrated from Ibn Abbas RA:

Ibn al-Athir said: al-Mutarajjilat are women who resemble men in terms of clothing and nature. While al-mukhannath is a man who resembles women.

According to another narration:

Al-Imam al-San’ani said that the Prophet PBUH’s curse upon this sin indicates how immense the sin is. The hadith portrays the prohibition of women imitating men and vice versa.

Besides, it is HARAM for a wife to feel redha towards kufr and evildoings done by her husband even if she herself does not commit the act. This is based on a maxim which states:

“Redha upon kufr action is kufr, the same as redha upon fasiq is a fasiq action”

Conversely, Islam teaches us to always abstain from kufr and sinning, not redha upon them. This is mentioned in a hadith that the Prophet PBUH said:

Ibn Rajab al-Hanbali gave his commentary upon the above hadith, he said:

“Whoever witnesses an evildoing then he hates it in his heart, he is the same as the person who is not witnessing it if he is unable to defy it by his tongue and hand. Whoever does not witness it but he redha with the evildoing, it is the evillest prohibited action and his redha obstructs his defiance by his heart while it is an obligation upon each and all Muslims which never fades from an individual whatever circumstance he may in”.

Therefore, a believer shall not prioritise obedience towards a creation than obedience to Allah SWT. Allah SWT says:

Hence, in this matter, a wife shall not redha upon an evildoing done by her husband because Imam al-Qurtubi mentioned a maxim in his tafsir:

“Redha upon sinning is a sin”

In conclusion, a wife shall play her role as a preventive towards a sin committed by her husband which clearly contradicts shara’ rulings. The preventive measure shall be made wisely and with hikmah without any rough measures and quarrel. It is best for the wife to give advice to her husband to attend religious classes and always make du’a for him to turn back as well as repent to Allah.