AL-AFKAR #59: WILL THE PEOPLE WHO ARE PUNISHED IN HELL DIE? 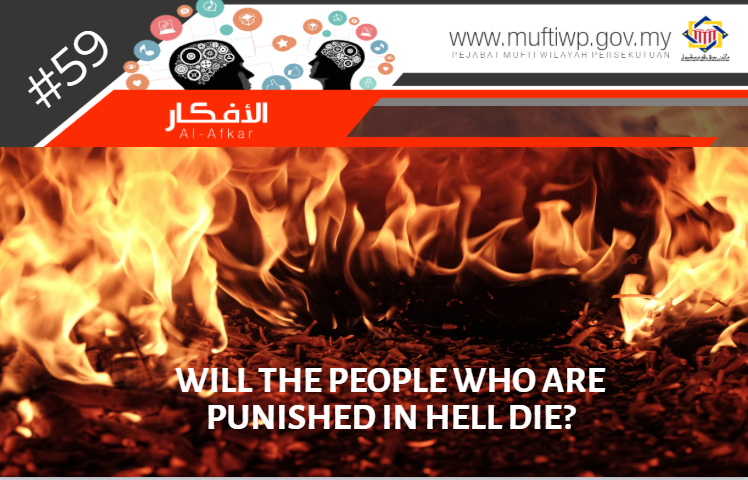 Will the people who are sentenced to hell die eventually? What is the true reality for those who are punished? Hope you could explain it to me. Thank you.

Indeed, the creation of humans is not a purposeless matter when they meet their death. Consequently, each and every human will be held accountable and his position will be determined, whether he will be placed in heaven or hell according to his deeds all through his life in this world. This is clear from the statement of Allah SWT:

“And whoever does righteous deeds, whether male or female, while being a believer - those will enter Paradise and will not be wronged, [even as much as] the speck on a date seed.”

While for those who are distracted from the hereafter, then hell are the punishment of Allah SWT for them:

And those who disbelieve and deny Our signs - those will be companions of the Fire; they will abide therein eternally."

According to the above verse, Imam al-Baghawi said what is meant by eternally means the inhabitants of hell will not be released from it forever nor will they die. See Maalim al-Tanzil (1/29).

This matter is clearly stated in a hadith from Abu Sa’id RA, the Prophet PBUH said:

“As for the people of Hell, who are its people (i.e., its permanent residents), they will neither die nor live therein. But there are some people who will be punished with fire because of their sins, whom it will kill, then when they have become like coal, permission will be granted for intercession for them. They will be brought, group by group, and scattered on the banks of the rivers of Paradise. It will be said: ‘O people of Paradise, pour water on them.’ Then they will grow like seeds carried by a flood (i.e., quickly).”

Imam al-Nawawi cited the opinion of scholars when explaining the meaning of the people of Hell, who are its people (i.e., its permanent residents), are disbelievers where they will never be able to escape hell. See Fatwa al-Nawawi, 104. This is in accordance with the statement of Allah SWT:

“And for those who disbelieve will be the fire of Hell. [Death] is not decreed for them so they may die, nor will its torment be lightened for them. Thus, do we recompense every ungrateful one.”

Hence, it is clear that Allah SWT do not permit the disbelievers to die as a punishment, for death is just a temporary pain compared to prolonged punishment appropriate with the time given in this world for every believer. Furthermore, the punishment is not just their inability to die, but their continuous punishments are explained by Allah SWT in the Quran:

“Indeed, those who disbelieve in Our verses - We will drive them into a Fire. Every time their skins are roasted through, We will replace them with other skins so they may taste the punishment. Indeed, Allah is ever Exalted in Might and Wise.”

According to the above discussion, we would say that it is crystal clear that the inhabitants of hell will not die so that they will continue to be punished for everything they had done in this world.

May Allah SWT protect us and free us from His hell and punishments. Amin.