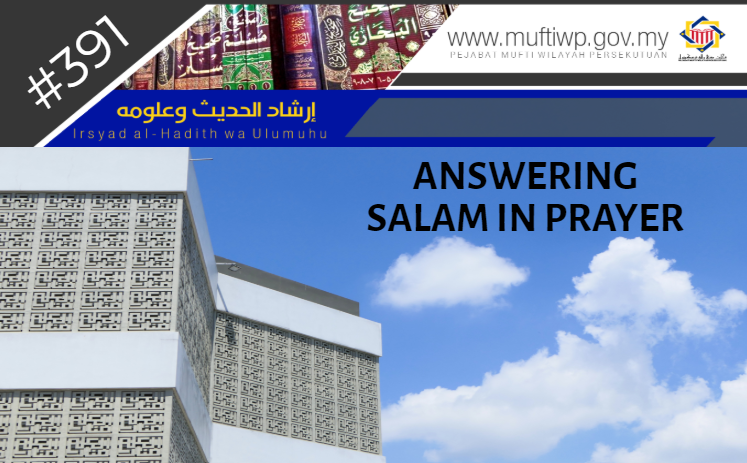 Is there any advice from the Prophet PBUH on how to answer the salam when he is in prayer?

Offering salam is an encouraged sunnah (سنة مستحبة) and the Prophet PBUH instructs us to offer salam to other Muslims. The reason is, there is a commandment or instruction from the Prophet PBUH to spread the salam to others. However, the commandment is not an obligation but just an encouraged sunnah. This is the famous opinion among scholars. However, it is an obligation to answer the salam. This is in accordance with the statement of Allah SWT:

“And when you are greeted with a greeting, greet [in return] with one better than it or [at least] return it [in a like manner].”

According to the above question, there is a hadith narrated by Imam al-Tirmizi in his book, from Bilal RA when Ibn Umar R.Anhuma asked him:

“How did the Prophet (PBUH) reply to them when they gave him Salams and he was performing Salat?' He said: 'He would motion with his hand.”

Syeikh al-Mubarakfuri commented on the above hadith saying that the Prophet PBUH once motioned with his fingers in another narration from Suhaib and there is no contradiction with this hadith for the Porphet PBUH motioned with his hands. The reason is, it is understood that sometimes the Prophet PBUH would motion with his hands and other times with his fingers. Furthermore, it can also be understood that what is meant by hand is fingers for muqayyid (specified) matters are included in mutlak (absolute) matters as stated by al-Syaukani. (See: Tuhfah al-Ahwazi, 2/305)

In madhab al-Syafie, it is impermissible to answer salam with words while in prayer and it Is not obligatory on him to answer it and it is sunnah for him to answer it through signal or he can answer it after he completed his prayer. (See al-Majmu’, 4/104)

To conclude, one should answer salam with hand gesture or signal or answer the salam after his prayer is completed. Lastly, may Allah SWT give us strength in practising the sunnah of the Prophet PBUH and protect us from bad character. Amin.