IRSYAD AL-HADITH SERIES 393: THE BEST TIME DURING THE NIGHT FOR SUPPLICATIONS TO BE GRANTED 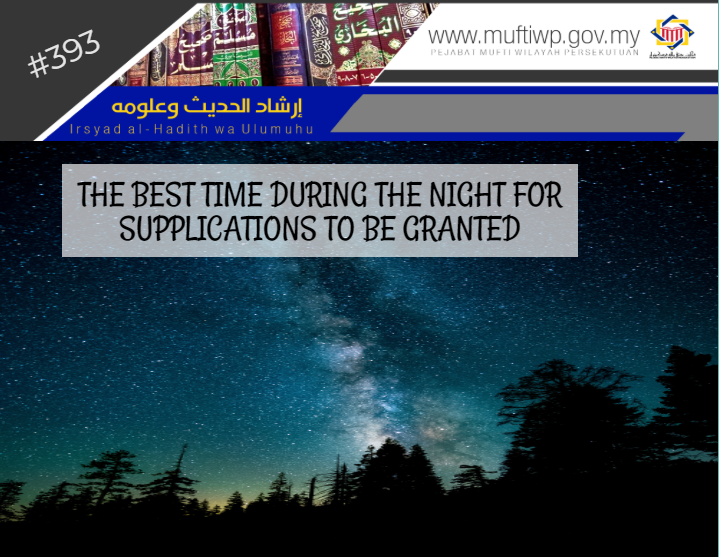 Assalamualaikum Dato. When is the best time during the night for supplications to be granted stated in the hadith?

Supplication is a weapon for the believers and is one of a special worship for it directly connects a slave to his Creator which is Allah SWT. Furthermore, we are encouraged to enliven the night. Allah SWT state:

“And from [part of] the night, pray with it as additional [worship] for you; it is expected that your Lord will resurrect you to a praised station.”

According to the above question, we would like to first present the hadith mentioned which state the time where supplication will be granted by Allah SWT during the night:

“There is an hour during the night in which no Muslim individual will ask Allah for good in this world and the next without His giving it to him; and that applies to every night.”

Reviewing the commentary of scholars regarding the above hadith, it is not stated specifically the time meant in the hadith. Moreover, among the wisdoms Allah SWT withheld its time is to motivate us to strive in searching for it. Furthermore, the same happens for when Allah SWT conceal the night of al-Qadar and the time where supplications will be granted on Fridays. The reason is, we are encouraged to always enliven the night with acts of worships such as prayer, zikr, recitation of the Quran, supplication and others. Likewise, prayers during the night is the prioritized prayer after the obligatory prayers according to a hadith:

“Prayer was most excellent after the prescribed prayer is the prayer offered in the middle of the night,”

“(During) the last part of the night, and at the end of the obligatory prayers.”

To conclude, among the signs of Allah SWT’s love and care for us is the special time He set every night and certain times specially stated as a time where all supplication will be granted. Hence, it is our responsibility to strive in search of the time given to us. Lastly, may Allah SWT give us the opportunity and bless us with these special times. Amin.