IRSYAD AL-FATWA SERIES 315: IS POLITICAL IDEOLOGY INCLUDED IN THE MEANING OF SEKUFU (KAFAAH; COMPATIBILITY) IN MARRIAGE? 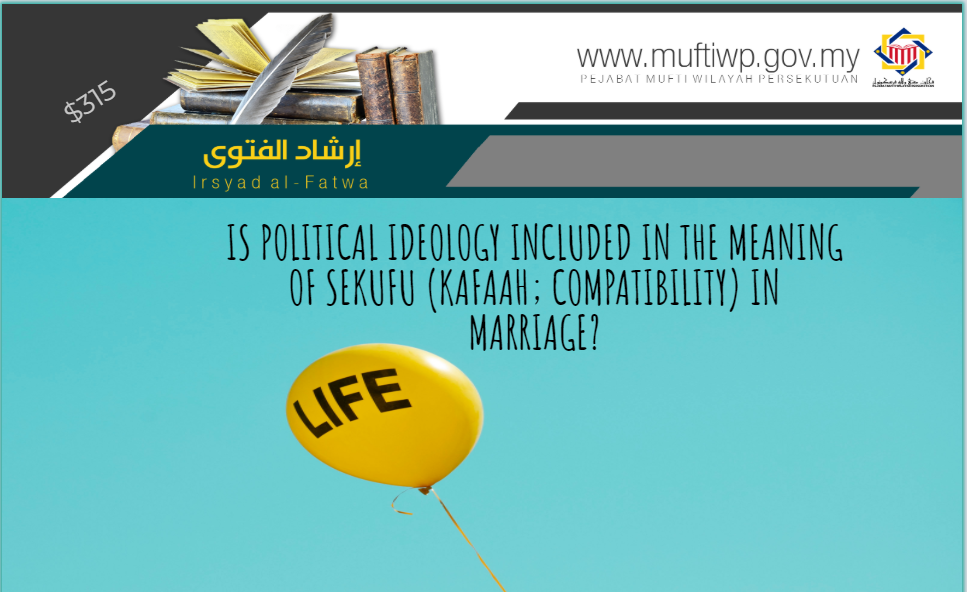 Assalamu’alaikum S.S. Mufti, can you please give us some enlightenment for the true meaning of sekufu (kafaah; compatibility) in marriage? Is having the same political ideology a part of consideration in determining the kafaah (compatibility) in a marriage?

‘Sekufu’ is a Malay word extracted from an Arabic word: Al-Kafa’ah. According to Kamus Dewan, sekufu means: equivalent in terms of position, level and hierarchy. I am a man of no respectable ancestors and being not sekufu (compatible) to you; Refer: Kamus Dewan 4th Edition.

While, the word Al-Kafa’ah means: Equivalent in terms of strength and nobility. Among them is in the context of marriage where a man is in the same level with a woman in terms of position, religious understanding and others. Refer: Al-Mu’jam al-Wasith.

Some are in the opinion that Al-Kafa’ah means: A man matches or is compatible with a woman, or he (the man) is better than her in terms of position and religious understanding. Refer: Mu’jam Mustalahat al-Fiqhiyyah.

The Sanctioning of Sekufu in Marriage

As we generally know, Al-Kafa’ah is one of the acclaimed attributes in a marriage. This is stated in some verses of the Quran and the Sunnah itself. Among them are the saying of Allah SWT:

In this verse, there is an indication of commandment of sekufu in marriage. This is because, Allah SWT state that women of purity are for men of purity and vice versa.

It is known that the phrase الطَّيِّبَاتُ brings a general meaning. Hence, if a man is religious, no matter whether he is rich or poor, a Quraisyi or not, then he is compatible and sekufu with a woman who is also religious.

Syeikh al-Sya’rawi said in his tafsir of this verse: “We state here in the tafsir of verse no 3 for Surah Al-Nur that a marriage is built by the base of sekufu, that one does not surpass the other. One of the forms of sekufu is in Surah Al-Nur verse no 26.” Refer: Tafsir al-Sya’rawi (16/10243).

It is the same here in stating al-Kafa’ah in a marriage where it is based on a narration from Ummu al-Mu’minin A’isyah R.Anha where the Prophet PBUH said:

"Choose the best for your sperm, and marry compatible women and propose marriage to them."

Imam Ibn al-Qayyim said: Verily, the jurists have different opinion on the characteristics of al-Kafa’ah. Imam Malik in a zahir opinion of his madhab said that sekufu is by the aspect of religion. While, in another narration of him (Imam Malik), kafa’ah is in three aspects; religion, free-will and being free from any disreputable attributes.

Whereas, Imam Abu Hanifah is of the opinion that kafa’ah is specifically by religion and lineage of an individual. While, in another narration of him, he states that kafa’ah is by five aspects: religion, lineage, free-will, expertise (career) as well as property.

And when we analyze the meaning of lineage in the issue of kafa’ah, there are two narrations from Imam Ahmad.

First: An Arab and non-Arab is considered sekufu.

While, the Shafi’ite scholars are of the opinion: Kafa’ah is considered in the aspects of religion, lineage, free-will, expertise as well as being free from any disreputable attributes that drive people away of them. Refer: Zad al-Ma’ad, Ibn Qayyim al-Jauziyyah (5/145).

We state here that stating lineage as a consideration for sekufu is inaccurate. This is because, during the time of the Prophet PBUH, he married off some companions among men and women who are Quraisyi with spouses who are not a Quraisyi.

Therefore, these situations clearly show that sekufu in term of lineage is not a consideration in a marriage.

Imam Ibn Qayyim al-Jauziyyah said: “The basic of the Prophet PBUH’s rule is by taking into account the religion in determining al-kafa’ah as a base and complementary aspect. Hence, a Muslim woman cannot be married to a non-Muslim man. A righteous woman also cannot be married to a non-righteous man. And the Quran and Sunnah never take consideration of sekufu in aspects other than that (religion)”.

He also said: ‘Nasab (lineage) and career is not a consideration (in this issue of Al-Kafaah). The same for the issue of rich or poor. Hence, it is permissible for non-Quraisyi men to marry Quraisyi women. The same applies for men not from the tribe of Banu Hashim to marry women of Banu Hashim. Underprivileged men are also permitted to marry rich women”. Refer: Zaad al-Ma’ad, Ibn Al-Qayyim (5/144).

In fact, a supportive evidence which states religious understanding as an important factor concerning sekufu in a marriage is based on a hadith narrated by Abu Hurairah RA where the Prophet PBUH said:

"If there comes to you one with whose character and religious commitment you are pleased, then marry (your daughter or female relative under your care) to him, for if you do not do that there will be Fitnah in the land and widespread corruption."

Syeikh Abu al-Hassan al-Sindi in his commentary upon this hadith said: “It means if there comes to you a man asking the hand of your daughter with character and religious commitment you are pleased, because akhlak (character) is the madar (axis) of a decent life like religion is the madar of fulfilment of responsibilities” Refer: Hasyiah al-Sindi ‘ala Ibn Majah (1/606).

To close, we state here that the most selected opinion in explaining the meaning of al-kafaah is compatibility or equivalent in term of religious understanding. This is in accordance with hadith we mentioned before regarding the guide of choosing future son-in-law:

"If there comes to you one with whose character and religious commitment you are pleased, then marry (your daughter or female relative under your care) to him, for if you do not do that there will be Fitnah in the land and widespread corruption."

The same goes for guide from syara’ in choosing a woman which is suitable to be made a wife by also considering the religious understanding. This is in accordance with a hadith narrated by Abu Hurairah RA where the Prophet PBUH said:

“A woman may be married for four reasons: for her property, her status. her beauty and her religion, so try to get one who is religious, may your hand be besmeared with dust.”

Hence, both above-mentioned evidences is a clear sign to indicate that religious understanding for both husband and wife is the leading factor emphasized in a marriage.

Nevertheless, we are also not denying the fact that local uruf also part of consideration in this issue of kafaah. This means, sometimes, same political ideologies, coming from the same state and family background also have to be taken into consideration and concerned before both man and woman intend to marry one another.

Hence, if there is no mutual understanding in political ideologies between these two persons, there will be some negative implications alongside the marriage, like constant disputes or worst, causing a divorce. This means, kafaah in political ideologies also need to be taken into account before marriage is decided between two people. This is what is meant by فقه المآل which is fiqh that concerns on the implications and effects that may happen in result of certain actions.

Lastly, may this explanation be helpful in giving the correct understanding for us in this religion. Ameen.