AL-AFKAR #63: THE MEANING OF BARZAKH 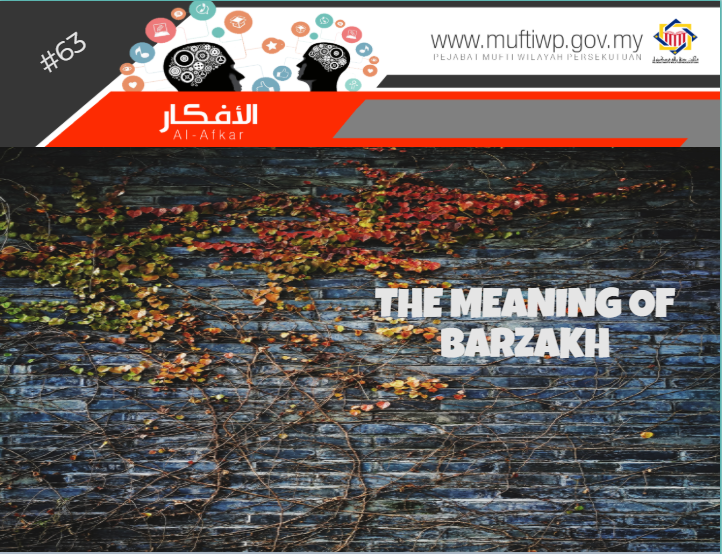 Assalamualaikum SS Dato’ Seri Mufti. What is the meaning of barzakh?

According to the Lisan al-Arab dictionary by Ibnu Manzur: The meaning of barzakh is a place between this world and the hereafter before we are assembled in Mahsyar, which is during the time when a person dies until the day of resurrection. Thus, whoever has passed away will enter the realm of barzakh. (See Lisan al-Arab, 3/8)

It is stated in Mukhtar al-Sihah: The meaning of barzakh is a wall separating two matters. It also means whatever is in between this world and the hereafter since the death of a person until he is resurrected. Hence, whoever has died means that he has entered barzakh. (See Mukhtar al-Sihah, pg. 73)

Al-Jurjani in al-Ta’rifat said: al-Barzakh (البرزخ) is mentioned three times in the Quran and they are all stated as a noun. Literally, it means something that separates two matters. (See al-Ta’rifat, pg. 45)

“…and behind them is a barrier until the Day they are resurrected.”

Imam Ibn Kathir explained the meaning of al-Barzakh in the above verse by citing several opinions of scholars, among them are:

Whereas, Imam al-Qurthubi explained the above verse stating that barzakh is a realm between death and resurrection. (See al-Jami’ li Ahkam al-Quran, 6/113)

According to the above discussion, it is understood that barzakh is a place for the deceased until they are all assembled in Mahsyar. It is a place between the world of the living and the hereafter. Thus, whoever who passes away means they have entered barzakh.

May Allah SWT save us all from its punishments and bless us with His blessings and help. Amin.