AL-KAFI #731: ARE THERE SPECIFIC ADVANTAGES FOR FASTING ON THE 27TH REJAB IN CONJUNCTION WITH ISRA’ MIKRAJ? 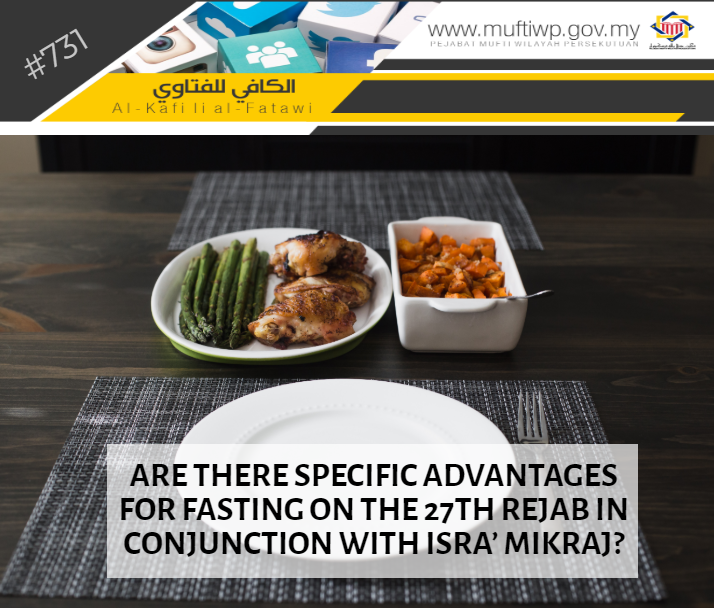 I want to know what is the ruling and advantages of fasting on the 27th Rejab in conjunction with Isra’ Mikraj?

Among the types of sunnah fasts are:

It is sunnah to fast on the 9th of Zulhijjah for those who are not performing the hajj.

"It is an expiation for the sins of the preceding year and the current year."

The day of Arafah is one of the prioritized days compared to other days. This is in accordance with a hadith where the Prophet PBUH said:

“There is no day when God sets free more servants from Hell than the Day of 'Arafa.”

As for hajj pilgrims, it is not sunnah for them to fast on this day, it is even sunnah for him to break his fast following the actions of the Prophet PBUH to strengthen himself to supplicate on this day.

Asyura, is the tenth day of Muharram, while Tasu’aa’ is the ninth day of the same month. This is according to a hadith from Ibn Abbas RA, he said:

"It is an expiation for the sins of the preceding year,”

In the next hadith from Ibn Abbas RA, he said, the Prophet PBUH said:

“If I live until next year, I will fast the ninth day (of Muharram).”

However, the Prophet PBUH passed away before the time comes.

The evidence of fasting on both days is a hadith from Aisyah R.Anha, she said:

"The Messenger of Allah used to be keen to fast on Mondays and Thursday."

In the next hadith, from Abu Hurairah RA, the Prophet PBUH said:

"Deeds are presented on Monday and Thursday, and I love that my deeds be presented while I am fasting."

The prioritized days to fast every month is on the days of the full moon, which is on the 13th, 14th, and 15th of every Islamic month or also known as white days (الأيام البيض). The reason is the night on these nights are brightly illuminated by moonlight. This is according to a hadith from Abu Hurairah RA, he said:

“My friend (the Prophet (ﷺ) ) advised me to observe three things: (1) to fast three days a month; (2) to pray two rak`at of Duha prayer (forenoon prayer); and (3) to pray witr before sleeping.”

In a hadith from Abu Qatadah RA, he said, the Prophet PBUH said:

“Three days of each month, this is fasting for an entire lifetime.”

In another hadith, from Abu Dzar RA, he said, the Prophet PBUH said:

"If you want to observe Saum on three days in a month, then fast on the thirteenth, fourteenth and fifteenth of the (lunar) month."

The same is stated in a hadith from Qatadah bin Milha RA, he said:

“The Messenger of Allah (ﷺ) used to command us to fast the days of the white (nights): thirteenth, fourteenth and fifteenth of the month. He said: This is like keeping perpetual fast.”

However, fast on the 13th Zulhijjah is excluded because it is haram to fast on that day.

The prioritized way to fast is to fast for six days consecutively right after Eidul fitri. However, this is not a condition for the fast. The sunnah is still achieved even if a person fasted in intervals. This is in accordance with a hadith from Abu Ayub RA, the Prophet PBUH said:

"Whoever fasts during the month of Ramadan and then follows it with six days of Shawwal will be (rewarded) as if he had fasted the entire year."

According to this book and the evidences presented, it is clear to us that fasting on the 27th of Rejab is not included as sunnah fasting unless if it so happens to fall on a Monday or Thursday. Furthermore, we have discussed that the determination of the incident of Isra’ and Mi’raj on the 27th Rejab is also a khilaf (a matter of which scholars have a difference of opinions) among the scholars of tarikh.

Let us all obey the commandments of Allah SWT and the Prophet PBUH and this is what is taught to us in Islam. May we are always blessed with guidance from Allah SWT.