AL-KAFI 1369: WHAT IS THE RULING OF USING DATING PAGE TO FIND OUR PARTNER AND UPLOADING PICTURES ON IT? 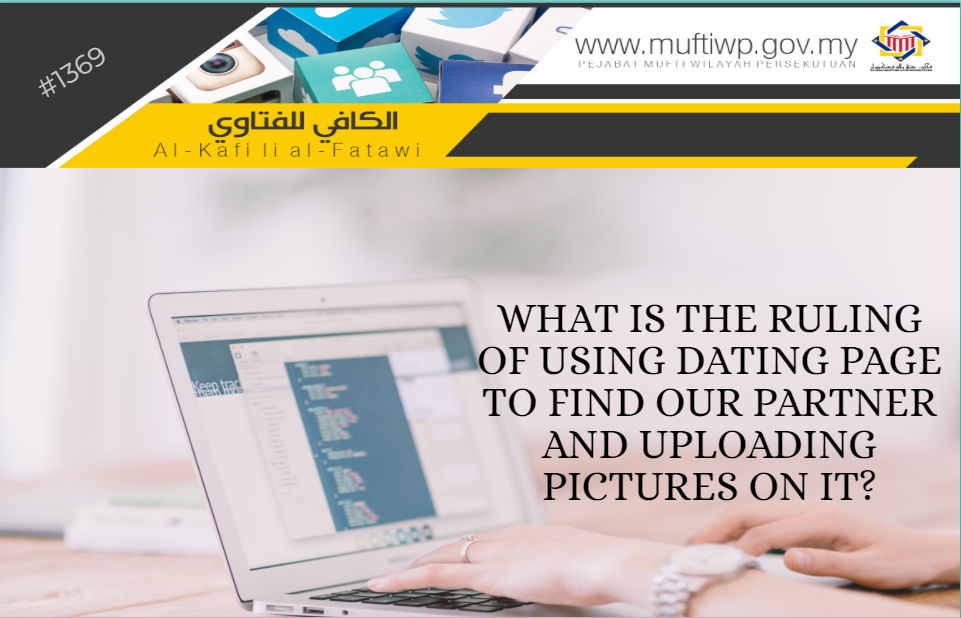 Assalamualaikum. I would like to ask regarding the ruling of using pages to find one’s partner (to get married) and uploading pictures on them which normally have the elements of tabarruj and may lead to fitnah. What is the ruling for using this kind of pages, Tuan Mufti? Thank you.

Allah SWT create human in pairs with the intention of then knowing one another. Allah’s saying in the Quran:

“O mankind, fear your Lord, who created you from one soul and created from it its mate and dispersed from both of them many men and women. And fear Allah, through whom you ask one another, and the wombs. Indeed, Allah is ever, over you, an Observer.”

Dr Wahbah al-Zuhaili in his commentaries states the purpose of the creation of human in pairs is to produce progeny and to form a family. Hence, love and relationships may be established as well as forming teamwork and silaturrahim which is the sign of the power of God. (Refer: al-Tafsir al-Munir li al-Zuhaili 4/223)

The Prophet PBUH advised that if comes to you a man with good akhlak and religion, then, marry him. The hadith is narrated by Abu Hurairah RA where the Prophet PBUH said:

"If there comes to you one with whose character and religious commitment you are pleased, then marry (your daughter or female relative under your care) to him, for if you do not do that there will be Fitnah in the land and widespread corruption.'"

Syeikh Atiyyah Salim said that a marriage intended to be formed must be based on taqwa and religion. (Refer: Syarah Bulugh al-Maram, 2/357)

The Ruling of Looking at an Ajnabi

Originally, the ruling of a person looking at an ajnabi (non-Mahram) of different gender is prohibited (haram) if there is no purpose and necessity. This is in accordance with the saying of Allah SWT in the Quran:

Dr Wahbah al-Zuhaili in his commentary stated that lowering the gaze and guarding private parts are an honour and dignity. Allah’s saying stresses on the ruling of gazing to others and covering awrah. The purpose is to shut the door towards harm and to shield from prohibited actions. (Refer: al-Tafsir al-Wasit li al-Zuhaili: 2/1746)

However, in certain circumstances, it is permissible to look at an ajnabi. For example, to ask for her hand in marriage. This is as what is recorded by Abu Humayd al-Sa’di RA, where the Prophet PBUH said:

“When one of you intend to ask for a woman’s hand in marriage, it is not wrong to look at her first, even if the woman knows or not on the intention”

This practice is encouraged in Islam, but there are still limitations and boundaries of the gaze set by syarak. In al-Fiqh al-Manhaji, it is stated that it is impermissible for a man who is getting engaged to look at his future spouse, except her face and palms. This is because both parts are adornments of a woman permitted by syarak to be seen. (Refer: al-Fiqh al-Manhaji: 4/47)

“…and not expose their adornment except that which [necessarily] appears thereof,”

In fact, it is permissible for the people who are getting engaged to look at their future spouse repetitively to ensure that he or she will not regret his or her decision after getting married. (Refer: al-Mausu’ah al-Fiqhiyyah al-Kuwaitiyyah: 22/17)

Being excessive in adornments for a woman is permissible only in front of her husband. In addressing this issue, referring to the scholars’ opinion in the rulings on tabarruj stated in al-Mausu’ah al-Kuwaitiyyah:

“Presenting adornments and beauty to those of whom not supposedly be portrayed like wearing tight clothes to show the body shape or so, and by doing this, it may attract the desire of those who see, then it is haram by scholarly consensus (ijma’), except towards her husband.” (Refer: al-Mausu’ah al-Fiqhiyyah al-Kuwaitiyyah: 10/62)

“And abide in your houses and do not display yourselves as [was] the display of the former times of ignorance,”

Syeikh al-Marahi stated in his book that the prohibition of presenting adornments and beauty of women towards men is as what was done by the women during Jahili period before the rise of Islam. (Refer: Tafsir al-Maraghi: 22/6)

Referring to the question asked, it can be concluded that the usage of websites to find one’s partner (for marriage) is originally is permissible. This is due to an Islamic legal maxim:

Hence, the creation of these websites is permissible if the purpose is for good intentions and it will be haram if it intends on ma’siah.

Likewise, the purpose and the usage is also the same. There is a legal maxim which states:

This means every action that leads to haram, then its purpose and means will also be haram. For example, selling grapes originally is permissible, but, if it is known that the buyer intends to buy it with the purpose of making liquor, then it is haram to sell it to him.

Hence, the matter pertaining websites to find one’s partner, its original ruling is permissible. However, if its usage and creation is for the purpose of ma’siah and actions which are haram, then the ruling becomes haram.

The same said, it is haram to upload pictures which are tabarruj as well as presenting excessive adornments and beauty until it attracts one’s desire and tempts others to look at her.

The best resort is for the admin of the website to set some needed guidelines like pictures which cover awrah, protecting the users’ privacy, preserving the limitations of interaction between people of opposite gender and so on.

Besides, you may also stream the official website of the Mufti’s Office of Federal Territories entitles: AL-FATWA #227- HUKUM MEMUAT NAIK GAMBAR TIDAK MENUTUP AURAT DI MEDIA SOSIAL (AL-FATWA #227: THE RULING OF UPLOADING PICTURES THAT DOES NOT COVER THE AWRAH IN SOCIAL MEDIA) for more details.

May this explanation and enlightenment give us better understanding in religion and related issues.