AL-KAFI #1398: THE RULING OF A WIFE FORBIDDING HER HUSBAND FROM MARRYING ANOTHER WOMAN 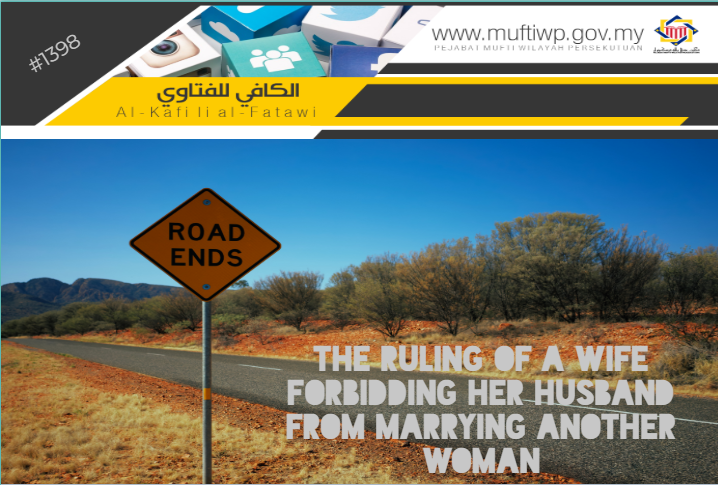 What is the ruling of a wife forbidding her husband from practicing polygamy?

It is not sinful for a wife to forbid her husband from practicing polygamy when there is a necessity for her to do so. The only thing forbidden by syarak is making something unlawful when it has been made lawful by Allah as well as forbidding one’s husband from marrying another woman by threatening to injure herself or others.

However, if she forbids him with justifications which are permitted by syarak, then it is lawful and is encouraged. For example, if practicing polygamy may cause injustice in terms of the nafaqah (obligation of sustenance and provisions) and qismah (allocation of days between wives), wives or nafaqah of the children and parents, then forbidding and preventing the husband from this is an honorable advice in religion.

This includes preventing him from hurting his wife and causing excessive anxiety when the wife is afflicted with jealousy. This is in accordance with a hadith narrated by al-Miswar bin Makhramah RA where the Prophet PBUH delivered a sermon at the minbar:

Imam Ibn Hajar al-Asqalani said: “And because in it (the prohibition upon Ali to practice polygamy while being married to Fatimah) as mentioned before in (the chapter) manaqib (Fatimah) in which she was tested with (a test) of losing her beloved mother (Khadijah) followed by her sisters, one by one, until there is no one left for her to ask for counsel on private matters (marital issues) to ease her jealousy.”

Ibn Hajar also cited the narration of al-Zuhri in which the Prophet PBUH said:

“And I am worried for her faith (Fatimah) will be tested with some testament”, which means Fatimah becomes impatient due to jealousy,” then uttering something which is ineligible for someone with virtue like her to utter when she is in extreme anger.”

In a hadith narrated by Muslim, it is stated that 'Ali b. Abi Talib sent the proposal of marriage to the daughter of Abu Jahl as he had Fatima, the daughter of Allah's Messenger (ﷺ), (as his wife). When Fatima heard about it, she came to Allah's Apostle (ﷺ) and said:

The people say that you never feel angry on account of your daughters and now 'Ali is going to marry the daughter of Abu Jahl. Makhramah said: Thereupon, Allah's Messenger (ﷺ) rose up and I heard him reciting Tashahhud and say:

Now to the point. I gave a daughter of mine (Zainab) to Abu'l-'As b. Rabi, and he spoke to me and spoke the truth. Verily Fatima, the daughter of Muhammad, is a part of me and I do not approve that she may be put to any trial and by Allah, the daughter of Allah's Messenger cannot be combined with the daughter of God's enemy (as the co-wives) of one person. Thereupon 'Ali gave up (the idea of his intended) marriage.

In the narration of al-Bukhari, it is stated:

Imam al-Nawawi said: “I will never say anything that contradicts with the law of Allah. So, when He make lawful of a thing, then I will not make it unlawful and I will not be silent from prohibiting it because my silent is a symbol of it being lawful. And among the prohibition of marriage is gathering the daughter of the Prophet PBUH and the enemy of Allah together upon one husband”

If we look upon the perspective of Fiqh, indeed, the original ruling of polygamy is merely permissible. However, there are several other situations of which the ruling will change into three. (Refer: al-Mu`tamad fi al-Fiqh al-Syafie, 4/25-26;

“Harm shall not be inflicted nor reciprocated”

Narrated by Malik (31) in al-Muwatto’

This is in accordance with the saying of Allah SWT in the Quran:

“But if you fear that you will not be just, then [marry only] one or those your right hand possesses. That is more suitable that you may not incline [to injustice].”

The meaning of ‘just’ which is chosen from the above criterion is the obligation of a man to be fair and just in providing nafaqah, shelter, mutual quality of life as well as other rights of a wife. While in terms of feelings, it is a relative issue and is out of control. Hence, differences in term of emotions will not be sinful, if he has fulfil the physical aspect and if it does not lead to injustice and oppression. This is what is meant by the saying of Allah SWT:

“And you will never be able to be equal [in feeling] between wives, even if you should strive [to do so]. So do not incline completely [toward one] and leave another hanging. And if you amend [your affairs] and fear Allah - then indeed, Allah is ever Forgiving and Merciful.”

Hence, Rasulullah SAW himself is the most just towards his wives in allocating the days and serving them, although he loves Aisha R.anha more. He made the du’a:

Coming back to the root of discussion, when the ruling for polygamy itself may be mubah (permissible), Sunnah and haram, then it is not wrong for a wife to question her husband’s decision by forbidding him for some reasons and needs. Hence, this is not only included in the chapter of giving good advice among Muslims, but in fact part of implementation of Shura which is encouraged by the Shara’. This is because, when a wife learns that her husband intends to marry another, she has to make sure that her rights like nafaqah which is decided by uruf and mutual consent is not abandoned or neglected when polygamy takes place. In other words, a wife has the right to voice out her different view by having Shura with her husband. The right of speech in Shura system is stated in the verse of the Quran. Allah SWT say:

“…and consult them in the matter. And when you have decided, then rely upon Allah. Indeed, Allah loves those who rely [upon Him].”

Syeikh Muhammad Tohir Ibn Asyur said: “Then, it is clear that musyawarah which is encouraged in this verse is upon matters pertaining the ummah and their maslahah (public good). Allah commanded it here as well as praising it when speaking of Ansar in His saying in another surah:

“…and whose affair is [determined by] consultation among themselves,”

Also, Allah has made it a requisite in family matters as His saying which says:

“And if they both desire weaning through mutual consent from both of them and consultation, there is no blame upon either of them,”

Then, Allah SWT sanction us with verses mentioned above through the application of musyawarah for every layer of maslahah; family, tribe, country and the ummah as a whole.”

Based on the above facts and explanation, it is clear to us that the ruling of a wife forbidding her husband to practice polygamy is not a sinful act if done on the basis of advice, Shura to avoid any form of abandonment and neglect towards her rights. Here, we would like to advise the community to educate our women with the virtues of a modest Muslim woman and to protect their rights from being abandoned or neglected. This is part of our Prophet PBUH’s words of advice in his last sermon as narrated by Jabir bin Abdillah RA:

“Fear Allah with regard to women, for you have taken them as a trust from Allah, and intimacy with them has become permissible to you through Allah’s Word. Their rights over you are that you should provide for them and clothe them in a reasonable manner.”

May this explanation give us all a better understanding.