IRSYAD AL-HADITH SERIES 287: DRINKING THE BLOOD OF THE PROPHET PBUH 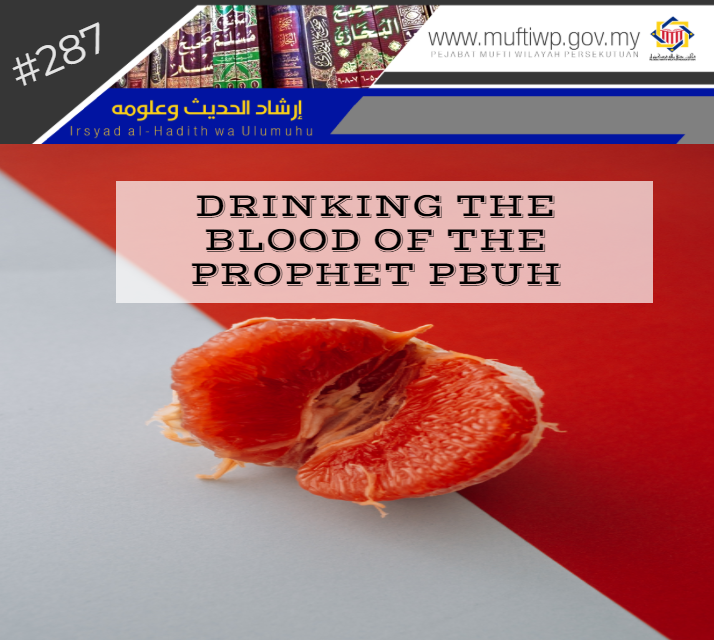 What is the ruling of drinking the blood of the Prophet PBUH?

Before we answer the above question, it is generally known that blood is najis (impure). This is discussed in the books of Fiqh under the chapter of najis. This is in accordance with the saying of Allah SWT:

Prohibited to you are dead animals, blood, the flesh of swine, and that which has been dedicated to other than Allah

Among the verses of al-Quran which clearly states the impurity of blood is:

The saying of Allah SWT:

Say, "I do not find within that which was revealed to me [anything] forbidden to one who would eat it unless it be a dead animal or blood spilt out or the flesh of swine - for indeed, it is impure

According to Sheikh Wahbah al-Zuhayli in his tafsir, among the reason of prohibition for blood is because it is a suitable place for these microorganisms to thrive and breed. [See: Tafsir al-Munir, 80/8]. Hence, it is clear to us that blood is najis and this is strengthened by the statement of Imam al-Nawawi (676 H) that:

“Go and hide it (this blood) from the humans. Then, I went there and drank the blood. After that, I came to meet the Propjet PBUH again, then he asked: “What have you done?” He answered: “I hid the blood at a place cannot be seen by humans”. The Prophet PBUH said: “By any chance, did you drink it?”. He answered: “Yes, I drank it.” [See: al-Mustadrak, 638/3]

Imam Ibn al-Qayyim cited a story in which Malik bin Sinan, a father of Abu Sai’d al-Khudri who drank the blood of the Prophet PBUH during the battle of Uhud. [See: Zad al-Ma’ad, 177/3]. This story is also said as sahih by Sheikh Sofiy al-Rahman al-Mubarakfuri in his book al-Rahiq al-Makhtum:

Malik bin Sinan which is the father of Abu Sai’d al-Khudri sucked the blood from the cheek of the Prophet PBUH and swallowed it. Then the Prophet PBUH said: “Spit them out!”. He answered: “By Allah’s name, I will not spit them out.” Then he continued with the battle. [See: al-Rahiq al-Makhtum, 247/1]

There are several narrations which stated that the Companions drank the Prophet PBUH’s blood like the story of Safinah the slave of the Prophet PBUH, Salim Abu Hind al-Hijam, a Quraish man and etc. However, these narrations are dhaif (weak) and are refuted by the scholars on its authenticity. This includes the narration from Malik bin Sinan RA because this story is mursal as stated by al-Hafiz Ibn Hajar al-Asqalani (852 H). However, the story of Abdullah bin Zubair is the strongest (with origin) when compared to other narrations as it is supported by syawahid (supported narrations from different sanads) to support the story.

In conclusion, in understanding the ruling of impurity of the Prophet PBUH’s blood, we may divide it into two opinions as stated above. If we choose to state that the Prophet PBUH’s blood is pure, then it is included under his specializations. While if we state it as najis, then it is not wrong as it is the opinion of some scholars. Lastly, the Prophet PBUH is a noble man and we as his ummah are obligated to follow his example in everything we did because he is the best example. May Allah SWT make us from among the ummah of Prophet Muhammad PBUH who succeed in attaining his syafa’ah in the hereafter. Amin.