IRSYAD AL-HADITH SERIES 296: THE AGE OF DHAB/UROMASTYX (THE LIZARD OF THE DESERT) UP TO 700 YEARS? 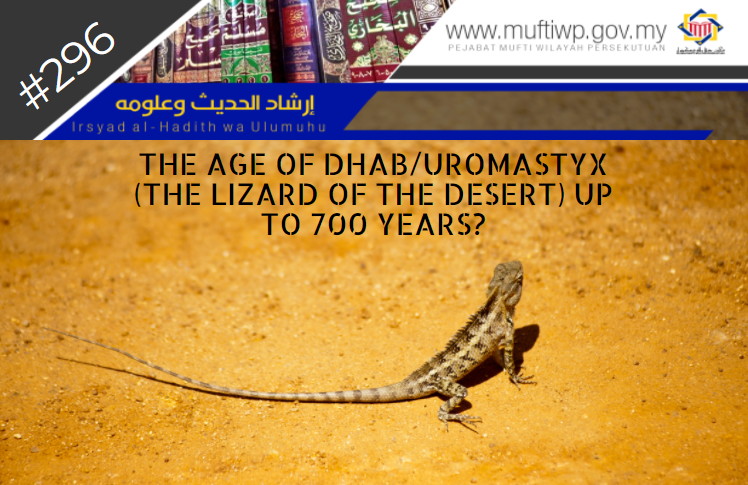 Assalamualaikum SS Datuk Mufti. Is there a hadith that states dhab can live up to 700 years?

Dhab is a type of lizard (in the Malay society) that live in deserts. Scientifically, it is classified from a part of lizard. It is also known as Egyptian Mastigure or Egyptian dabb lizard or Egyptian spiny-tailed lizard. While the scientific name is Uromastyx aegyptius microlepis.

Furthermore, dhab is a cold-blooded reptile that reproduces by laying eggs and has hard scales. Additionally, dhab is a herbivore (only consume plants). It spends most of its time in burrows it has dug to hide or between rocks to hide and take shelter. A dhab can grow up to 14 to 36 inches long or more. (See: https://ms.wikipedia.org/wiki/Dhab)

According to the above question, we did not find any narrations or hadiths regarding the age of a dhab. However, it is stated by Ibn Khalawaih and this is cited by most scholars in their books. The following are the citation from Ibn Khalawaih:

“It has been said that Ibn Khalawaih states that dhab lives up to 700 years. It does not drink water and urinate every 40 days. Its teeth do not fall out and it is also said that its teeth are not separated (like human teeth).”

Moreover, among the scholars who cited this opinion in their books are:

The Ruling of Eating Dhab

Scholars have differing opinions on the ruling of eating dhab. However, the majority of scholars stated that it is permissible. This is also the opinion of Imam al-Nawawi in his book al-Minhaj:

Among the evidences presented by scholars in ruling it permissible is based on a sahih hadith by Imam Muslim:

To conclude, we did not find any hadith or thabit narration from the Prophet PBUH which state that dhab would live up to 700 years. It is just an opinion from Ibn Khalawaih as we have stated in the above discussion and this is recorded in books that commented on the hadith of the Prophet PBUH. Furthermore, the Prophet PBUH did not prohibit his companions from eating the flesh of dhab although the Prophet PBUH dislikes it. Lastly, may Allah SWT give us the correct understanding in religion. Amin.