IRSYAD AL-HADITH SERIES 301: YASIN AND TAHA ARE THE NAMES OF THE PROPHET PBUH? 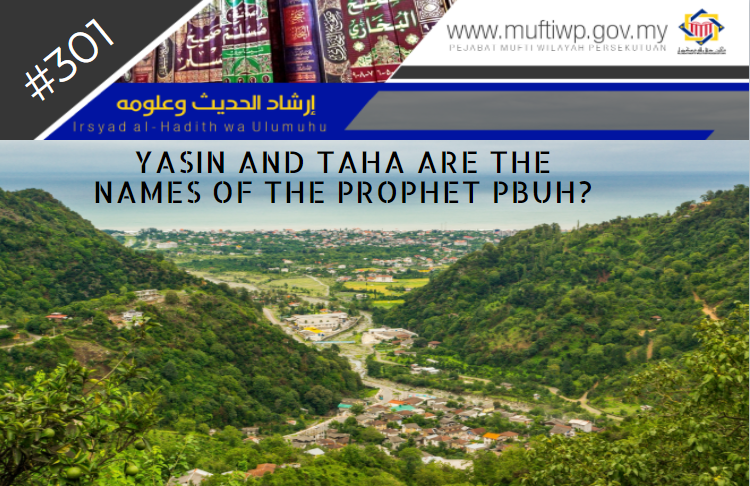 Assalamualaikum, is it true that Yasin and Taha are the names of the Prophet PBUH?

The Prophet PBUH has several names or monikers as stated in the Quran and sahih hadiths. Among them is a hadith narrated by Imam al-Bukhari:

I have five names: I am Muhammad and Ahmad; I am Al-Mahi through whom Allah will eliminate infidelity; I am Al-Hashir who will be the first to be resurrected, the people being resurrected there after; and I am also Al-`Aqib (i.e. There will be no prophet after me).”

Furthermore, there is another sahih narration from Imam Muslim who mentions other names of the Prophet PBUH:

Considering both hadiths, we understand that the Prophet PBUH has several names of which he named himself. As for in the Quran, there are too many names or monikers used for our beloved Prophet Muhammad PBUH:

And say, "Indeed, I am the clear warner,”

According to the above question, the names of Yasin and Taha mentioned as the name of the Prophet PBUH is stated in a narration by Imam al-Qadhi bin ‘Iyadh in his book al-Syifa but with sighah tamridh. (See al-Syifa, 448/1). Furthermore, it is also written by Ibn ‘Asakir in his book al-Kamil. (See al-Kamil fi Dhu’afa’ al-Rijal, 509/4). It is also mentioned in the Arabic poems.

In answering this question, we try to include the opinions of commentary scholars in this matter. Among them is Syeikh Abdul Rahman al-Sa’di in his commentary that Taha is one of the al-muqatha’ah (individual letters) which usually persists at the beginning of numerous surah and it is not among the names of the Prophet PBUH. (See Taysir al-Karim al-Rahman, 501/1)

As a conclusion, associating good names to the Prophet PBUH is not an issue even if it comes from a dhaif narration. Some scholars are not too rigid in this matter as long as it does not involve matters of halal and haram and usul aqidah. Lastly, may Allah SWT give us understanding in religion and strength to follow the example of our beloved Prophet Muhammad PBUH. Amin.