IRSYAD AL-FATWA SERIES RAMADAN EDITION 145: IS A PERSON FINED WITH KAFFARAH IF HE HAD INTERCOURSE AFTER INTENTIONALLY INVALIDATING HIS FAST BY EATING? 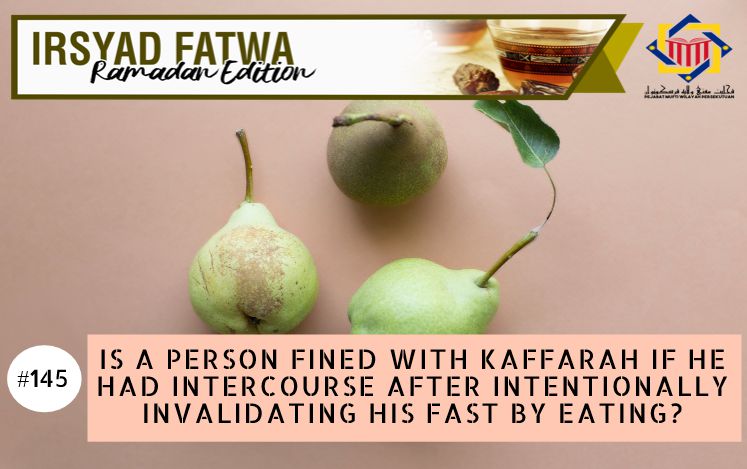 Assalamualaikum. Do I have to pay kaffarah if I had intercourse after I intentionally invalidate my fast by eating and drinking?

Kaffarah (الكفارة) literal meaning is closing. This means closing of sin as an alleviation from Allah SWT.

The term kaffarah means an action that enables the sin to be redeemed by freeing a slave, giving in charity or fasting on certain conditions.

The jurists agreed that whoever intentionally have intercourse during the day in Ramadan out of his own free will, then his fast is invalidated and he is fined with kaffarah kubra as stated in a hadith narrated by Abu Hurairah RA, where he said:

There are several types of kaffarah set by syarak, such as kaffarah for oath, murder and zihar. As for kaffarah imposed because a person invalidates his fast by having intercourse, they are as the following:

This must be following the order explained above. Thus, a person cannot simply choose which kaffarah he wants, except if he is incapable to fulfil the preceding kaffarah. However, if he is only temporarily incapable to do so, then it is still his responsibility to fulfil it when he is capable. (See al-Fiqh al-Manhaji 2/364)

The Ruling of Intentionally Invalidating Fast Then Have Intercourse

According to the above issue, jurists have differing opinions on this matter. Syeikh Wahbah Zuhaili in his book said “according to the opinion of Syafi’iyyah, if a person invalidates his fast by eating then he has intercourse, then there is no kaffarah for him.” (See al-Fiqh al-Islami wa adillatuhu li Zuhaili, 3/1722)

The same opinion is presented by Imam al-Bajuri in his Hasyiah where he states: “It is exempted (the kaffarah) of having jimak (intercourse) when his fasting is invalidated by eating and drinking. This trick only removes the kaffarah, but not the sin.” (See Hasyiah al-Baijuri 1/440)

Whereas, according to madhhab Imam Abu Hanifah, Imam Malik and Imam Ahmad, kaffarah is wajib even if the fast is first invalidated by eating then intercourse happens. The reason this is so is because the obligation to fast is not abrogated on him, thus the prohibition is also not abrogated because he invalidates his fast not due to excuses sanctioned by syarak. (See al-Fiqh ala al-Mazhab al-Arba’ah 1/509-511)

The worship of fasting in Ramadan is the basics and the pillars of Islam. Allah SWT commanded His slaves to fast as stated in His statement:

Whoever intentionally neglects the obligation of fast, then he has neglected one of the pillars of Islam. This is a major sin and he will receive the wrath of Allah SWT. There is a stern warning against those who intentionally leave his fast and this is stated in a hadith by Ibnu Abbas RA, where the Prophet PBUH said:

“The bonds of Islam and pillars of religion are three of which Islam is built on them. Whoever leaves one of it is considered as a disbeliever and his blood in permissible, they are reciting the syahadah, obligatory prayers and fasting in Ramadan.”

Furthermore, the rewards of replacing the Ramadan fasting when he does not have any permitted rukhsah (facilitation) will never be the same of replacing it on another day. This is in accordance with the hadith narrated by Abu Hurairah RA, where the Prophet PBUH said:

"Whoever breaks the fast during Ramadan without an allowance or illness, then if he fasted for all time, his fasting would not make up for it."

Hilah (الْحِيلَةُ) lexically means shrewdness or cunningness in managing something, such as craftily changing something to another in order to reach the aim or purpose. (See al-Mausuah al- Fiqhiyyah al-kuwaitiyyah 2/101)

The term helah means its usage is specific to change something to another matter. And usually it is used according to the situation and custom. (See al-Mausuah al-Fiqhiyyah al-Kuawaitiyyah, 18/328)

The jurists divided hilah into two:

Prohibited hilah; it is used to attain the purpose which contradicts syarak and involving doubtful matters. Such as invalidating and changing the syarak rulings by leaving the wajib and making the prohibited and matters which contradicts maqasid syariah permissible. (See al-Mausuah al-Fiqhiyyah al-Kuwaitiyyah 18/330)

According to the above explanation, invalidating fast without any reason for the sole purpose of having intercourse without getting fined with kaffarah for having intercourse during the day in Ramadan is included as prohibited hilah. The reason is its purpose is to do something which would originally invalidate the fast and will be imposed with kaffarah kubra of which it would also result in a person committing major sin because breaking fast without permissible excuse.

However, the act is actually to intentionally invalidate the fast using it as a trickery to avoid kaffarah by eating or drinking first before having intercourse.

This trickery is categorized as prohibited hilah. This is due to the fact that the usage of the hilah is to reach the purpose of something which is prohibited through haram means. It is an act that would invite the wrath of Allah SWT and a major sin. The reason is fasting in the month of Ramadan is one of the pillars of Islam.

Furthermore, Islam does not prohibit intercourse during the night of Ramadan. This is stated in the Quran, Allah SWT states:

“It has been made permissible for you the night preceding fasting to go to your wives [for sexual relations].”

If he leaves the obligation of fasting, then he actually has neglected one of the pillars of Islam. Sayyid Sabiq in his book cited the words of Imam al-Zahabi who says: “Indeed, whoever leaves Ramadan fasting intentionally, then it is worse than the act of fornication and their Islam is doubted as well as there is a possibility that they are from among the zindik disbelievers.” (See Fiqh al-Sunnah, 1/434)

Thus, whoever committed this sin, then it is obligatory for him to repent with all his heart, leave the sin immediately and determined to never repeat it. This is advised by al-Kalbiy:

“True repentance is regret in one’s heart, istighfar on one’s tongue and removal of sin with his body with the determination to never repeat it.” (See Tafsir al-Qurtubi, 18/198)