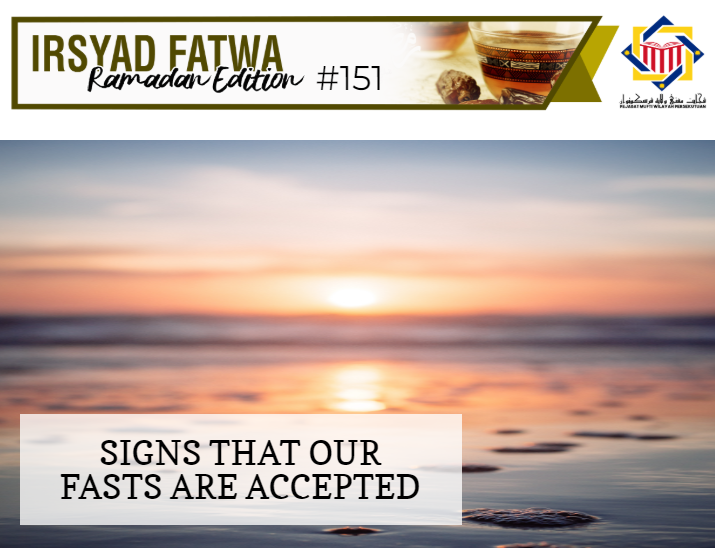 Assalamualaikum. Are there any signs that the fast that we performed is accepted by Allah SWT? Hope for an explanation.

We will start with a hadith narrated by Abu Hurairah RA, the Prophet PBUH said:

“Whoever fasted the month of Ramadan out of sincere Faith (i.e. belief) and hoping for a reward from Allah, then all his past sins will be forgiven,”

Al-Hafiz Ibn Hajar stated: The meaning of fasting out of sincere faith is fasting with a firm belief on the obligation of fasting. While the phrase ‘احْتِسَابًا’ means hoping to be rewarded by Allah SWT. (See Fath al-Bari, 4/115)

Al-Khattabi said: What is meant by ihtisab is fasting with the hope of being rewarded by Allah SWT. (See Fath al-Bari, 4/115)

Answering the above question, Imam Ibn Rajab al-Hanbali said: Whoever obeys Allah SWT in worship and completed it, then among the signs that the worship is accepted is that he continues in the worship afterwards. While among the signs that the worship is rejected, is that after performing the worship, he followed it with an act of transgression. Whatever good that a person did after a misgiving that he had committed will delete his mistake and surely the best would be in continuous good of performing worship after worship. (See Lata’if al-Ma’arif, pg. 244)

Ibnu Rajab also said: “Continuing to fast even after the month of Ramadhan is a sign that the Ramadhan fasting of a slave is accepted. Indeed, when Allah SWT accepts the worship of a person, He would guide him to continue doing good.” (See Lata’if al-Ma’arif, pg. 244)

The Prophet PBUH himself stated that the best of worship is a worship which is performed consistently. From Aisyah R.Anha, the Prophet PBUH:

“The acts most pleasing to Allah are those which are done continuously, even if they are small.”

Imam al-Nawawi said: This hadith encourages an act to be performed continuously even if it is small compared to a great act but discontinuous, for with the continuity of the act, then the obedience, dhikr, muraqabah and sincerity towards Allah SWT also continues. This would lead to multiplication of rewards without any discontinuity. (See Syarh al-Nawawi ‘ala Sahih Muslim, 6/71)

Thus, it can be understood that one of the signs that our worship of fasting is accepted is that we continue in our acts of worship and obedience even after the Ramadhan ends.

Furthermore, he would become a better person from before and will feel as though all his good deeds are not enough. He does not have the attributes of ujub (conceit) for the worships he did. Ibn Qayyim in his book Madarij al-Salikin stated: The sign that a person’s worship is accepted is when he feels that his worships are insufficient and small. Ultimately, a person who truly knows Allah SWT would always perform istighfar and repent each time he completed worship. The Prophet PBUH would recite istighfar three times after praying.

May Allah SWT grant us the strength to always obey all His commandments. Amin.