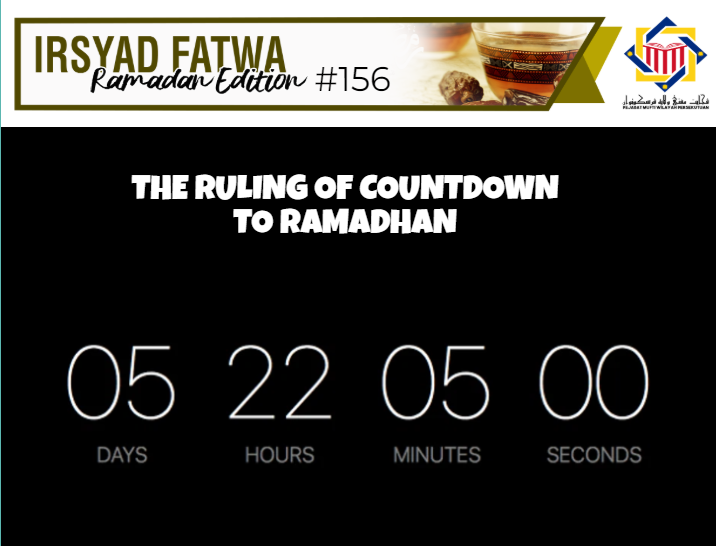 Assalamualaikum ustaz. What is the ruling for the countdown to Ramadhan? Hope for an explanation from ustaz. Thank you.

Indeed, the month of Ramadhan is the most awaited month by a believer. Allah SWT says:

The month of Ramadhan [is that] in which was revealed the Qur'an, a guidance for the people and clear proofs of guidance and criterion. So whoever sights [the new moon of] the month, let him fast it; and whoever is ill or on a journey - then an equal number of other days.

To answer the above question, firstly, countdown means counting down the time to reach the awaited moment. Indeed, the action of waiting a certain moment of worship is a noble act. This is the same as waiting for the next time for prayer after finishing a prayer. The Prophet PBUH said:

"Shall I not tell you of something by means of which Allah expiates for sins and increases good deeds?" They said: "Yes, O Messenger of Allah." He said: "Perform ablution properly despite difficulties, increasing the number of steps one takes towards the mosque and waiting for the next prayer after prayer.'"

O Allah, bless us on Rajab and Sya’aban, and make us reach the month of Ramadhan

Besides, we are commanded to make du’a to reach the Ramadhan in peace and safety as well as being ready to perform the worship in that month wholeheartedly. Among the commanded du’a is:

O Allah, bless me until Ramadhan comes, and bless Ramadhan for me and accept from me (my acts of worship from that month).

Besides, Imam Ibn Rajab al-Hanbali in his book, Lataif al-Ma’arif cited from Ma’la bin al-Fadhl: “Indeed, those (the salaf scholars) make du’a to Allah SWT for six months to have the chance to enter Ramadhan and the next six months for Allah SWT to accept their deeds”. (Refer Lataif al-Ma’arif: 204)

There were among the scholars who also recite poem due to their excitement in meeting ‘a blessed guest’ which is the month of Ramadhan, while saying:

The month of fasting full of bless has arrived

What an honour for this guest to come

This is one of the ways the previous people did to remind the public to get ready with the coming of Ramadhan. Besides, we already explained in detail what a person should do to get ready for Ramadhan, kindly refer to Bayan Linnas Series 62- Ahlan Wasahlan Ya Ramadhan.

Based on the above discussion and arguments, we conclude that the ruling of doing the countdown for Ramadhan is permissible. In fact, it is highly encouraged if the act motivates people to do good and increase their acts of worship. So, the people who did that will also receive the reward in accordance with a hadith of the Prophet PBUH where he said:

'Whoever leads to good, he is like the one who does it.'

There are many ways to remind the public to get ready to meet the month of Ramadhan. One of them is by doing countdown like this. It is a really good effort of da’wah and has a big impact on society. However, we should not only wait for the coming of Ramadhan, but we should also be prepared by performing even more good deeds in other months as well. May Allah SWT give us true understanding in His shari’a as well as taufiq and hidayah to perform the acts of worship wholeheartedly for Allah. Amin.