IRSYAD AL-FATWA SERIES 20: THE WISDOM OF THE PROHIBITION OF INTERCOURSE DURING MENSTRUATION 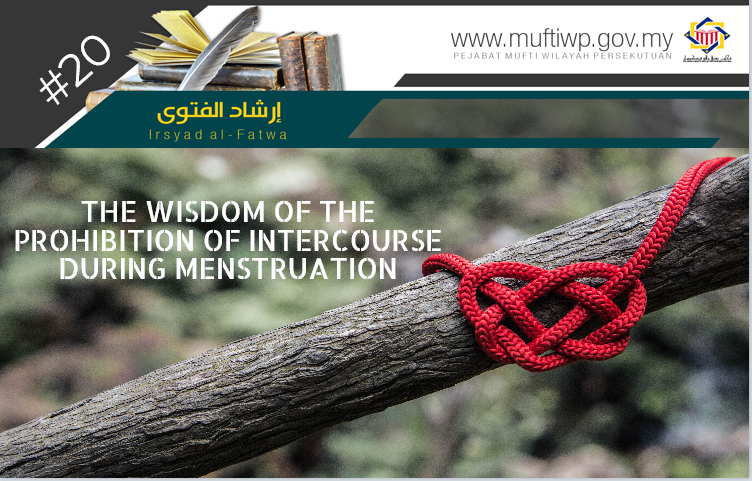 What is the wisdom for the prohibition of one having intercourse with his wife when she is menstruating?

Among the wisdoms for its prohibition is that it causes diseases for both the husband and wife. Numerous scientific research conducted proves that it is a reasonable prohibition.

A woman menstruating experiences hormonal changes. Blood vessel located in the uterus and vagina will expand. Since these vessels are fragile, it will easily burst when penis penetrates the vagina and cervix.

Medical theories acknowledged that menstrual blood could cause diseases. Dr Muhammad Ali al-Bar in his book Daurah al-Arham (The Functions of Uterus) under the title Menstruation and Diseases states: “The whole wall that covers the uterus is shed during menstruation. After analyzing menstrual blood under microscope, we found that there are red and white blood cells, there are also uterus lining that was shed and the uterus is wounded like when skin is peeled off.”

He further said, “Thus, the uterus is susceptible to bacterial infection. Blood is an optimum medium for bacterial growth. During menstruation, the immunity of uterus is weakened and is susceptible to bacterial infection. Bacteria on the surface of the penis is very harmful to the uterus. It’s even more harmful when the immunity of the uterus is in a weakened state during menstruation for there is limited isolation process of the acidic fallopian tube that kills bacteria.”

Intercourse during menstruation can also cause inflammation of the uterus and fallopian tube that could lead to lifetime pain which is hard to cure and could also lead to other diseases such as:

So true is the statement of Allah SWT:

And they ask you about menstruation. Say, "It is harm, so keep away from wives during menstruation. And do not approach them until they are pure. And when they have purified themselves, then come to them from where Allah has ordained for you. Indeed, Allah loves those who are constantly repentant and loves those who purify themselves."