IRSYAD AL-FATWA SERIES 216: GIFTING THE QURAN WITH TRANSLATION TO NON-MUSLIMS 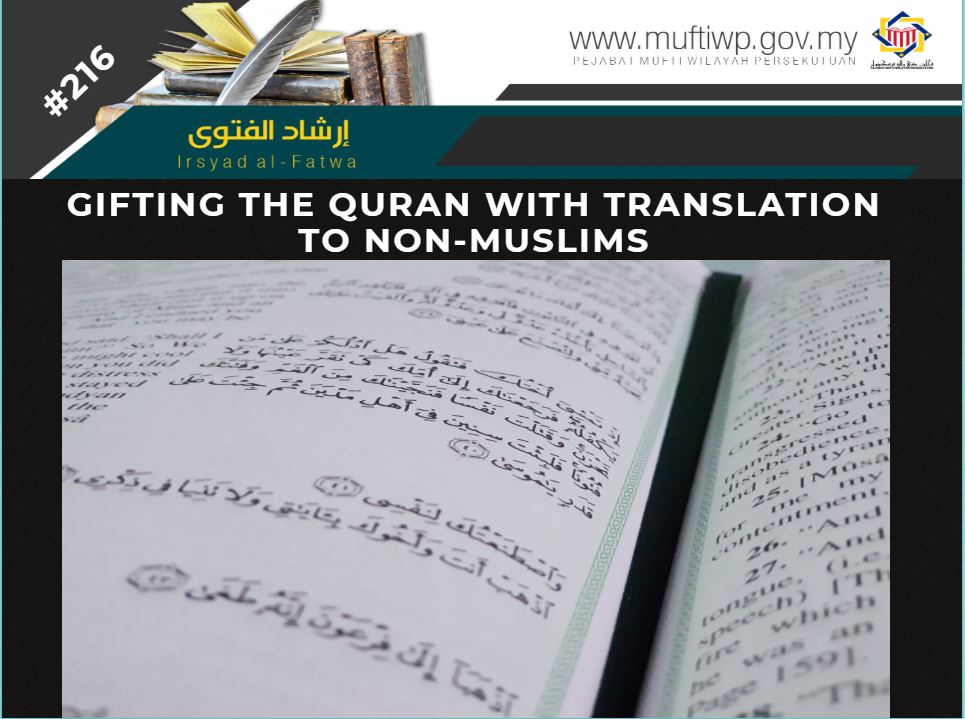 Al-Quran is the book of guidance for all Muslims regardless of time. According to the majority of the Islamic scholars, it is obligatory for a Muslim to be in a pure state and not in hadath (minor or major), before he can hold or carry the mushaf. Allah SWT states:

“None touch it except the purified.”

This prohibition also applies to the non-Muslims through qiyas (analogy). To protect the honour of the Quran, the earlier fuqaha agreed to forbid the selling of the Quran mushaf to the non-Muslims. The restriction is in the form of prohibition, while scholars in mazhab Hanafi consider the restriction to be makruh (undesirable). (Refer al-Mausu`ah al-Fiqhiyyah al-Kuwaitiyyah, 9/230). Furthermore, in mazhab al-Syafie, the strongest opinion is it is undesirable (makruh) to buy or sell the mushaf, even if the transaction is for the cost of rent and printing to non-Muslims. (Refer al-Majmu` Syarh al-Muhazzab, 9/252).

The same applies to the issue of ownership. The scholars forbid a Muslim from buying the Quran mushaf for a non-Muslim. According to most of the scholars, the trade is invalid, while in mazhab Syafie, there are two opinions. The strongest opinion said that it is invalid, while the second opinion states that the trade is valid, but the ownership of the Quran is automatically absolved from the non-Muslim. (Refer al-Tibyan fi Adab Hamalah al-Quran, 113). Moreover, it is prohibited to gift non-Muslim with the Quran or leave the Quran to non-Muslim (through a will). (Refer al-Mughni, 104/6)

This shows how honoured the Quran is, and the scholars put such effort in maintaining and protecting the Quran’s honour, as has been agreed among them, fulfilling the obligation of dignifying al-Quran, sanctifying and protecting it. (Refer al-Tibyan fi Adab Hamalah al-Quran, 164)

The Ruling for Gifting al-Quran with Translation to Non-Muslims

In this issue, there are two opinions from Islamic scholars:

The Opinion that Prohibits It

They use qiyas to the prohibition of giving ownership of the mushaf to non-Muslims. They referred to a hadith in al-Sahihain:

“From Abdullah bin Umar RA, The Messenger of Allah PBUH forbade that one should travel to the land of the enemy taking the Qur'an with him.”

Imam al-Nawawi said, there is a prohibition of travelling with the Quran to a country of disbelievers (non-Muslims), for the reason stated in the narration, which is in fear that the enemy would insult al-Quran, thus tarnishing the sanctity of the Quran. If such fear is absent, for example the entry of Muslims soldiers inside a non-Muslim territory, where the Muslims are dominating the non-Muslims, then the makruh and prohibition ruling are no longer applicable. This is supported by Abu Hanifah, al-Bukhari and others. However, Imam Malik and some of our ashab (al-Syafi’iyyah scholars) hold the opinion that it is a total prohibition (even without reason). (Refer al-Minhaj Syarh Sahih Muslim, 13/13)

This statement is supported by a remark in Mausu’ah al-Fiqh al-Islami:

“It is prohibited to sell or gift the Quran to non-Muslim, in fear that the Quran would be degraded or insulted, or it would dishonour the Quran itself.” (Refer Mausu’ah al-Fiqh al-Islami, 433/3)

The same is stated in fiqh books. Imam al-Nawawi said:

“Our ashab said, the beginning of the ruling from fiqh books, where there is athar salaf (narration and composition from early scholars) taking the ruling (of trade) for mushaf, according to a strong opinion and Imam Mawardi from ashab that issued a syaz (isolated) opinion that said, the buying and selling of hadith and fiqh books to non-Muslims is permissible.” (Refer al-Majmu` Syarh al-Muhazzab, 9/355)

Thus, Quranic tafsir (the Quran with translation or commentaries) is also one of the books with the same standing as Syariah books that is honoured and protected from the dangers of degradation if they fall into the non-Muslim hands.

The Opinion that Ruled It Permissible with Conditions

Islamic scholars are inclined towards this opinion, with the reason that the ‘illah (ratio legis) for the prohibition may be out of fear that a degradation towards the Quran may happen at the hand of the non-Muslims. Hence, when the ‘illah is absent, then the ruling becomes permissible. This is the opinion of the minority of the scholars especially contemporary scholars, such as Syeikh Muhammad al-Arifi, a member of Rabitah al-‘Alam al-Islami. [1][2]

Meanwhile, some scholars do not consider a copy of a book containing the verses of the Quran as a Quranic mushaf, with several conditions, thus the prohibition is not applicable for tafsir books and translations. Their arguments are:

“If the tafsir content exceeds the Quranic verses- and this is usually the case- then there are several opinions and the strongest opinion is that it is not prohibited (to touch or carry it) for it is not considered as a mushaf.”

From the words of Imam al-Nawawi above, we understand that Quranic tafsir (Quranic commentary) or Quranic translation is not considered as mushaf and mushaf rulings are not applicable to them.

The majority of scholars said that it is permissible to touch, carry or review Quranic tafsir, even when it contains the verses of the Quran, while one is in junub state. This is due to the fact that tafsir is meant as to understand the meanings of al-Quran and not to recite the verses of the Quran. Thus, the ruling of the Quran does not apply to it.

This is the opinion of mazhab Maliki and Hanbali. It is mentioned in Syarh Mukhtasar Khalil by al-Imam al-Kharasyi al-Maliki Rahimahullah:

“It is permissible for them (in hadath) to touch tafsir.”

The same is stated by al-Imam Ibn Qudamah al-Maqdisi in al-Mughni (1/109):

“And it is permissible to touch books of tafsir or fiqh, brochures or others, if they contain the verses of Allah, referring to a prophetic evidence, where the Prophet PBUH wrote a letter to the king of Rome where the letter contains the verses of the Quran, for it is not considered as mushaf and the prohibition is not applicable.”

“As for the translation of the Quran to other languages (other than Arabic), it is considered as a type of tafsir, as stated by scholars of mazhab Maliki. Thus, it is permissible for a person in hadath to touch it, according to those that hold the opinion that does not prohibit the touching of tafsir books.” (Refer al-Mausu’ah al-Fiqhiyyah al-Kuwaitiyyah, 10/38)

This is in accordance to a statement of Allah SWT:

“And if any one of the polytheists seeks your protection, then grant him protection so that he may hear the words of Allah. Then deliver him to his place of safety. That is because they are a people who do not know.”

Imam al-Syafie when commenting on this verse said, when a non-Muslim came and want to know about Islam, then it is the obligation of the leader to give him protection and let him hear the verses of Allah and inviting him to Islam in the hopes that Allah SWT would guide him to embrace Islam. (Refer Tafsir Imam al-Syafie, 903-904/2)

Conclusion
Based on the above discussion, we are inclined towards the second opinion that it is permissible for a Muslim to give the copy of Quran translation or tafsir, to non-Muslims, provided that he believes that the non-Muslim will not degrade or dishonour the Quran. This is due to the hadith that only prohibits the giving of mushaf to the enemy of Islam because they will insult and tarnish the purity and sanctity of the Quran. If it is believed they will not dishonour it, then according to some scholars it is permissible because the ‘illah of the law of the danger of insult or dishonour has disappeared.

Whereas according to most scholars, it is permissible to provide a copy containing Quranic verses and other words such as interpretations and others which is more than Quranic verses, so that they are no longer considered mushaf al-Quran. Nevertheless, since the copy still needs to be glorified because it contains the knowledge of Syariah, then it should not be given to disbelievers or non-Muslims that is feared could damage and insult it. As for non-Muslims who are believed to respect and maintain its honour, such as community leaders, schools, libraries, and the like, it is permissible to give the Quran and its translation.