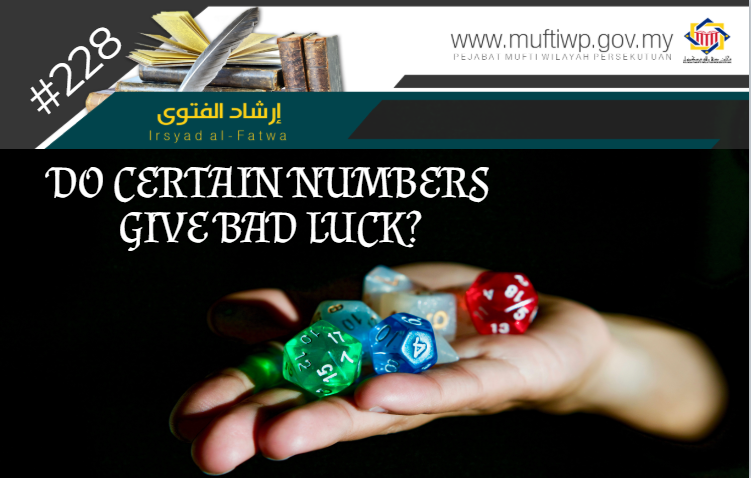 Do certain numbers, such as in telephone number, house number, or car plate number or others could bring bad or good luck to someone?

There are some people who believe that certain numbers could give bad or good luck in their lives. This brings attention to the issue and the question of what Islam’s perspective regarding this belief is. Hence, this article will discuss about this issue.

Only Allah SWT Can Give Benefit or Harm

Basically, Islam put a firm belief that there is nothing that could benefit or harm except for Allah SWT. Allah SWT states:

Imam Ibnu Kathir said: “Indeed, goodness, harm, benefit and danger, all are only owned by Allah SWT. There is nothing beside Him in those affairs. For only Allah SWT deserves to be worshipped. There is none beside Him,” (Refer: Tafsir al-Quran al-‘Azhim, 7/407)

Prohibition of Believing in Bad Luck and Only Say Good Things

Islam prohibits Muslims from linking certain days, months or incidents, or even numbers to anything bad happening. An example is when someone linked certain numbers to the bad luck that he experienced. The same goes to linking certain months to bad luck, thus avoiding the months from holding any ceremonies or events.

All these are prohibited in Islam, for it would lead to a belief that a disaster or harm can come from Allah’s creations, while in truth, Allah’s creations do not possess even the slightest power to bring benefit or harm. This could also impair the sense of tawakkal towards Allah SWT. Conversely, Islam teaches us to always be optimistic and see the best in everything that happens.

The term tatayyur or tiyarah comes from the word al-tayr (الطير) which means bird. In a belief from the Jahiliyyah people, before they went on any journey, they would first release birds. If the birds fly to the right, then they are happy because they consider it sa’ih, and they can begin their travel. However, if the bird fly to the left, barih, it is considered bad luck and they would be sad, for they cannot go on their journey because disaster or harm would befall them, and so, they would postpone their journey. (Refer: Miftah Dar al-Sa’adah by Ibn al-Qayyim, pg. 584-585)

Tiyarah or tatayyur or bad luck is not limited to the sad feelings or pessimistic attitude or belief of using the birds, but also include certain names, statements or phrases, places or numbers.

The Prophet PBUH prohibits considering anything as bad luck and postponing one’s travels. For a simple example, when someone is walking out from his house heading towards a certain destination, as soon as he steps out of his house, he saw a lizard passses in front of him. Then, he says, something bad would happen to him, while it is not a clear indication of anything would happen at all. After that, he cancels his trip or postpone it to another day. This is what is prohibited by the Prophet PBUH.

“Indeed, tiyarah is anything that made you keep on going or that stops you.”

“Whoever that postpone something for al-Tiyarah, then he has committed shirk.”

Consequently, the Prophet PBUH asked us to always be optimistic and say only good things if anything unclear happens. From Anas bin Malik RA, the prophet PBUH said:

Al-Hulaimi said: “Indeed, the Prophet PBUH like al-fa’l (optimism) because the belief in bad luck is a prejudice towards Allah SWT without any valid reasons. While al-tafa’ul is a good thought towards Him. A mukmin is commanded to always think the best in Allah SWT in any circumstances.” (Refer: Fath al-Bari Syarh Sahih al-Bukhari, 10/215)

Al-Tibi said: “The meaning for the permissibility of al-fa’l and the prohibition of bad luck is, if someone see something and considers it good for him and this encourages him to achieve the goodness, then he must do it. When seeing a bad luck on certain things, he should ignore it, and work hard to achieve what he wanted. If he believes in bad luck and stops himself from achieving what he wanted this is the tiyarah that is meant as the prohibition of believing in bad luck.” (Refer: Syarh al-Thibi ‘ala Mishkat al-Masabih, 9/2978)

The prohibition of al-Tiyarah is based on a few factors. Some of them are:

Other Examples of Tatayyur in Malay Community

Among the things that the Malay community consider as bad luck, or bad omens are:

As a conclusion, we are prohibited from believing certain numbers would bring bad luck. And other things similar to it. This is to prevent us from falling into shirk towards Allah SWT.

Consequently, we are asked to have faith in Allah, tawakkal and think of only the best of thoughts towards Allah SWT even when a disaster happens. And not blaming certain numbers or days as bad luck. Have confidence in Allah SWT’s authority over everything and rely solely on Allah SWT. Remember the statement of Allah SWT:

“And will provide for him from where he does not expect. And whoever relies upon Allah - then He is sufficient for him.”

Among the wisdom of this prohibition is to prevent the pessimism of people in life. Furthermore, we are asked to always be optimistic in living the days and life in any type of circumstances or disasters that befall us.

If there are such thoughts, then the thoughts should be eliminated, in fear that it is considered as elements of al-tiyarah. Pray to Allah SWT as has been taught to us by the Prophet PBUH:

“There is no good except Your good. The bird (that is used as tatayyur) is nothing more except your creation. There is no god that deserves worship except You.”

We also included below the guidelines that was issued by JAKIM regarding the matters or elements that contradict the aqidah and practise of ahli sunnah wal jama’ah. Though it is a guideline for publishing materials, there are few things that could be learnt from it. Some of it are:

Regarding the Forms of Superstitions

Some forms of superstitions are:

The Prohibited Publication of Anything Related to Superstition

All publication that promotes the ‘extraordinary nature’ of certain objects. Some examples are:

All publication that depicts stories from old beliefs, belief of omen, taboo and customs that are contradictory to Islamic teachings. Some examples are:

All publication that depicts the belief of bad luck and harm to someone or himself. Some examples are:

(Refer Guidelines for Printed and Audio-Visual Publications Related to Elements That Contradict the Faith and Practice of Sunnah Wal Jamaah Members by the Department of Islamic Development Malaysia (JAKIM), pg. 13-28)