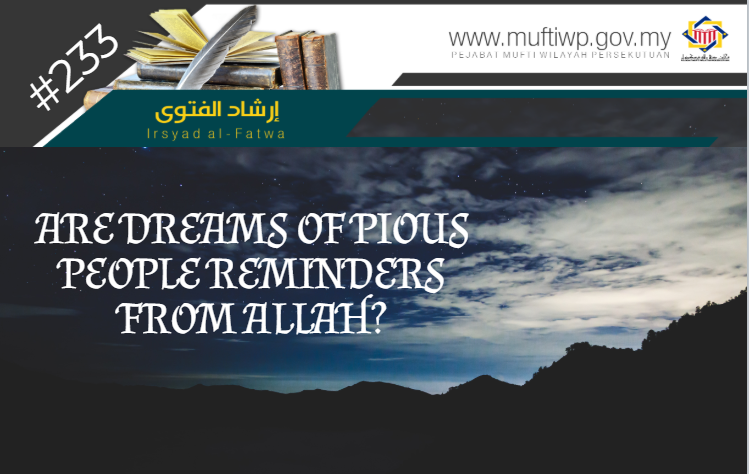 Are dreams of pious people a form of reminder from Allah for himself and people around him and can the dreams be categorized as the premonition of a Mukmin?

A true dream is one of the great honors and gifts from Allah SWT. In a hadith from Ibn Abbas R.Anhuma, the Prophet PBUH said:

“There remained nothing that gives good tidings from prophethood except a true dream which a Muslim has himself or which another Muslim has for him.”

“For them are good tidings in the worldly life and in the Hereafter.”

Ibn Kathir in Tafsir al-Quran al-‘Azhim (2/515), when commenting on this verse mentioned the opinion and a hadith from ‘Ubadah bin al-Samit RA, he asked the Prophet PBUH about the verse, then the Prophet PBUH answered:

There are several types of dreams experienced by a Muslim. This is explained in a hadith by ‘Auf bin Malik, the Prophet PBUH said:

“There three types of dreams: Dreams in which the Shaitan frightens someone. Dreams about something that has happened to the man himself. Dreams are a portion among the forty-six portions of Prophethood.”

From the above narrations, dreams that are experienced by humans are divided into three:

The first and second types of dreams do not have any meanings. While, for the third type of dream, it will be discussed further to answer the question asked.

Mukmin’s Dreams is One of the Signs of Prophethood

"In the end of time, the dreams of a believer will hardly ever fail to come true and dreams are a portion among the forty-six portions of Prophethood."

"The (good) dream of a faithful believer is a part of the forty-six parts of prophetism."

Ibnu Battal said, there are two types of dreams:

“There remained nothing that gives good tidings from prophethood except a true dream which a Muslim has himself or which another Muslim has for him.”

Ibnu Hajr in Fath al-Bari (19/461), when commenting on this hadith includes another hadith by Abu Ya’la from Anas bin Malik RA:

“Indeed, revelation and prophethood will end. There will be no more prophets and no more Messengers after me, but the al-Mubassyiraat will remain.’ The companions asked: ‘What is the al-Mubassyiraat?’ The Prophet PBUH answered: ‘the dream of a mukmin is a part of the parts of prophetism’.”

Ibn al-Tiin said: “The meaning of the hadith is the revelation will end with my death (the Prophet Muhammad PBUH). And nothing will remain from what is known from it, as to what will happen, except in dreams”. (Refer: Fath al-Bari, 19/461)

From the Quranic and prophetic evidences above, true dreams from pious people that is in line with the set attributes and traits, can be a form of good tidings and reminders. This has been explained above.

However, what should be emphasized is that true dreams do not come to just anyone. It is a gift from Allah SWT to pious people that uphold the religion and have a clean heart. From Abu Hurairah RA, the Prophet PBUH said:

“The ones who see the truest dreams will be the ones who are truest in speech.”

Clearly, only people with special attributes, such as piety, steadfast in religion and holding his tongue from anything that is sinful, will be blessed with true dreams. Imam al-Qurtubi said:

“An honest and pious Muslim are similar to prophets. Due to that, they are gifted with one of the portions of prophethood, which is being able to see the unseen world.” (Refer Fath al-Baribi Syarh Sahih al-Bukhari, 19/451)

Furthermore, we are asked to not arbitrarily interprets what someone’s dream means. Imam Malik was once asked: “Can someone just interprets someone else’s dreams as he like?” He answered: “Does he want to mess around with prophetism? Dreams are a part of prophethood. Thus, it cannot be messed with!”

Based on the above discussion, in our opinion, for a person who has a good dream, then the first thing he should do is to pray to Allah SWT and if it is an unpleasant dream then he should also pray to Allah SWT and ask for His protection. Similarly, the dreams that involve the universal ummah like the coming of a disaster, it is better to hide his knowledge of this and pray for forgiveness and protection from Allah. He should advice others to repent to Allah SWT and teach the people and community any knowledge that he possesses. This is the best way.

We are very worried that the public would misinterpret dreams and it will become a fitnah. Similarly, sometimes understanding leads to considering dreams as divine tasyri ' or which must be obeyed other than the Quran and Sunnah. In this regard, the scholars of Usul Fiqh has answered this issue with the ruling that dreams are not included as the source for Syarak.

Finally, let us always pray to Allah SWT in order to avoid the disruption and deceit of the shaytan.