IRSYAD AL-FATWA SERIES 310: IS IT BETTER TO DIE BEFORE DOOMSDAY? 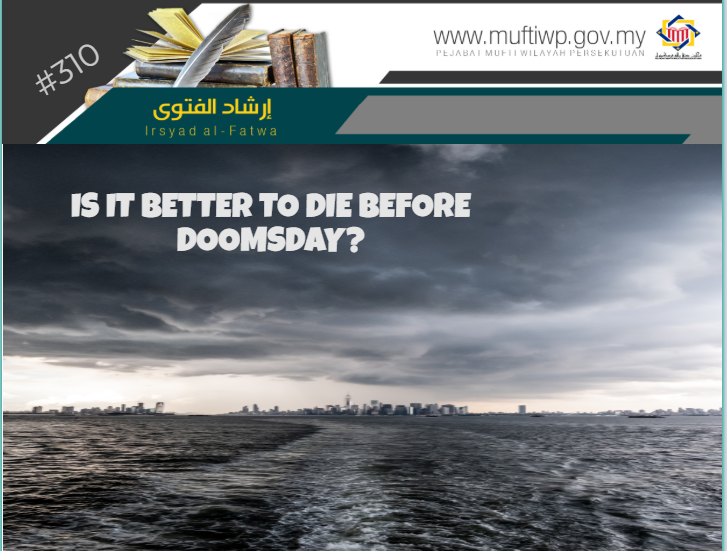 Doomsday or the last day is a horrifying day. In Arabic, it is known as al-Sa’ah “الساعة”.

The literal meaning of al-Sa’ah is a part (portion) of day and night. However, Allah SWT has named doomsday with several names as mentioned in the Quran. Among them is al-Sa’ah “الساعة” according to the statement of Allah SWT:

“Indeed, the Hour is coming - I almost conceal it - so that every soul may be recompensed according to that for which it strives.”

The term al-Sa’ah is used to describe a certain time that will come and during this time the end of time will happen.

The horrifying event of doomsday will make people forget anything and everything, desperate to save themselves. This is described in the Quran:

“On the Day you see it every nursing mother will be distracted from that [child] she was nursing, and every pregnant woman will abort her pregnancy, and you will see the people [appearing] intoxicated while they are not intoxicated; but the punishment of Allah is severe.”

Imam Jalal al-Din al-Mahalli in his commentary said: “(On the day, you will be distracted due to the quake) because of it, (all women who are nursing their child) in truth (from the child she is nursing) she forgets about it (and women who are pregnant will experience miscarriage) which means those who are pregnant (their pregnancy and you see people are in a drunken state) due to extreme fear (although they are not drunk) and not from being intoxicated (but Allah SWT’s punishment is truly frightening), hence they are petrified towards the punishment.” (See Tafsir al-Jalalain, pg. 433)

According to the above question, there is a hadith that prohibits us from hoping for death except if we fear that we will be affected by fitnah that will harm our faith, as stated by Anas bin Malik RA, the Prophet PBUH said:

The same is stated in another hadith from Abu Hurairah RA, where the Prophet PBUH said:

“None amongst you should make a request for death, and do not call for it before it comes, for when any one of you dies, he ceases (to do good) deeds and the life of a believer is not prolonged but for goodness.”

There is also a hadith that state hoping for death is included as a minor sign of doomsday. This is stated in a hadith from Abu Hurairah RA, where the Prophet PBUH said:

"The Hour will not be established till a man passes by a grave of somebody and says, 'It would be better that I was in his place."

The prohibition of hoping for death is when one becomes hopeless and gives up on life due to the test and tribulations that he faced. Indeed, death would sever a person from being able to perform any good deeds. However, with the increase of age, it is goodness for him for he is able to also increase his worships. But, if he hopes for death because he fears that he will be affected by the fitnah on his religion which could harm his faith and make him be a fasiq or a disbeliever, then it is permissible for him to hope for death on the condition that he also only hopes for death if it is better for him. The author of the book Syarh Riyadh al-Salihin said: “If he fears his religion will be affected by the fitnah, then it is not a problem for him to hope for death.” (See Syarh Riyadh al-Salihin, 3/477)

“O Allah! I ask of you the doing of the good deeds, avoiding the evil deeds, loving the poor, and that You forgive me, and have mercy upon me. And when You have willed Fitnah in the people, then take me without the Fitnah. And I ask You for Your love, the love of whomever You love, and the of the deeds that bring one nearer to Your love.”

Moreover, the time of death for a person has already been decided by Allah SWT, as He said:

“And for every nation is a [specified] term. So, when their time has come, they will not remain behind an hour, nor will they precede [it].”

Hence, hoping for death before its time because of hopelessness and giving up on life and the tests of the life in this world is completely prohibited. However, if the hope is due to fear towards fitnah on our religion and faith, then it is permissible but it is obligatory to be accompanied by the supplication taught by the Prophet PBUH. Indeed, Allah SWT has chosen each person to live in his suitable time along with his time of death. Allah SWT will not burden His slaves more than what they are capable of. This is stated in the Quran:

“Allah does not charge a soul except [with that within] its capacity.”

Every person including the believers who lives during the time when the major signs of doomsday are in effect would surely be tested with fitnah in their faith.

However, the real doomsday will not be experienced by a believer for Allah SWT will send a soft wind to take the souls of every believer so that they will not see or experience the horrors of doomsday. Several hadiths explain that this wind is sent after the Prophet Jesus AS is sent down and killed the false Messiah and the destruction of Ya’juj and Ma’juj (Gog and Magog), which means after the end of the major signs of doomsday.

There is a narration that details the attributes of this blowing wind, which is a wind more delicate than silk. It is an honour from Allah SWT for those who lived during this time full of trials and fitnah. It is explained at length in a long hadith regarding the Messiah, the Prophet Jesus AS and Gog and Magog which is followed by this wind. Narrated by al-Nawwas bin Sam’an RA, the Prophet PBUH said in a part of the hadith:

“…and at that time Allah would send a pleasant wind which would soothe (people) even under their armpits, and would take the life of every Muslim and only the wicked would survive who would commit adultery like asses and the Last Hour would come to them.”

“The Dajjal would appear in my Ummah and he would stay (in the world) for forty - I cannot say whether he meant forty days, forty months or forty years. And Allah would then send Jesus son of Mary who would resemble 'Urwa b Mas'ud. He (Jesus Christ) would chase him and kill him. Then people would live for seven years that there would be no rancour between two persons. Then Allah would send cold wind from the side of Syria that none would survive upon the earth having a speck of good in him or faith in him but he would die, so much so that even if some amongst you were to enter the innermost part of the mountain, this wind would reach that place also and that would cause his death.”

Doomsday will only happen after all believers are dead as stated in a hadith by Anas bin Malik RA, where the Prophet PBUH said:

"The Hour (Resurrection) will not occur until 'Allah, Allah' is not said on earth."

Only disbelievers and the evilest of people will face doomsday as narrated by Abdullah bin Mas’ud RA, where he said he heard the Prophet PBUH said:

“(It will be) from among the most wicked people who will be living at the time when the Hour will be established."

The same is stated in another hadith narrated by him, where he said the Prophet PBUH said:

“The Last Hour would affect (most terribly) the wicked persons.”

Imam al-Munawi said in his commentary: “And Allah SWT sent a soft wind, where the souls of every believers are taken and there will be no person except the most wicked people. Hence, indeed the wind is sent after sunrise from the west after the rise of huge animals (from the earth’s core) and other major signs of doomsday.” (See Faidh al-Qadir, 6/417)

Thus, when a wind come from Syria as stated in a hadith from Abdullah bin ‘Amr RA, doomsday is very near and after the major signs of doomsday have come to pass.

However, there are another hadith that state the wind would come from Yemen as stated in a hadith from Abu Hurairah RA, where the Prophet PBUH said:

Regarding the contradiction between the hadith that state the wind would come from Syria while the other state it will come from Yemen, Imam al-Nawawi gives two explanations for this:

According to the above evidences and arguments presented, we would like to state that every one of us must accept and believe in the fate and determinations made by Allah SWT for us including the matter of our death and doomsday without a shred of doubt.

There are several series of Irsyad al-Hadith and Bayan Linnas that we have previously published explaining the fitnah and signs of doomsday, among them are:

To conclude, as believers we should always prepare ourselves in facing the fitnah of the end of times. The reason is, there is nothing that could save us from these fitnah and tests except with our own faith.

Lastly, may Allah SWT protect and sustain our faith and make us from among His servants who are successful in this life and the hereafter. Amin.