IRSYAD AL-FATWA SERIES 471: THE RULING OF RECITING THE QURAN DIVIDING IT BY JUZUK 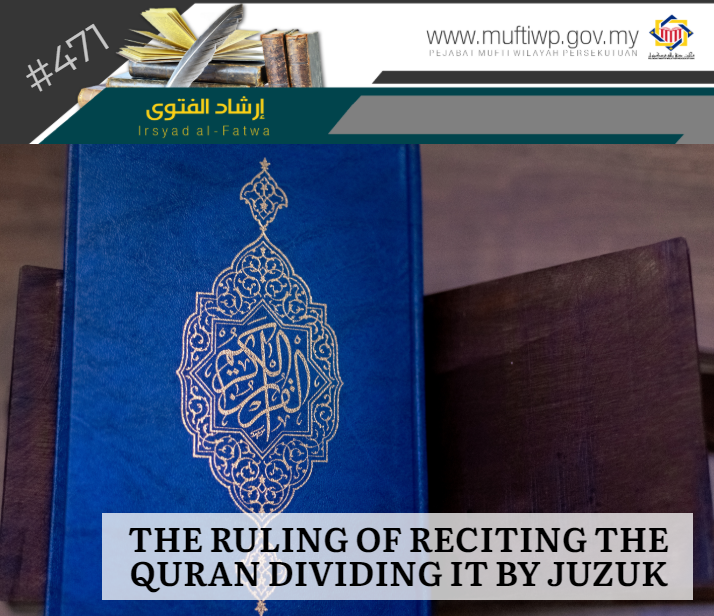 In our current situation where we are all restricted from going out due to the COVID-19 pandemic, there is a viral culture of which people would divide the Quran according to the juzuk and they would then recite their juzuk. Usually, a group is created whether it is through Whatsapp group or others for the juzuk to be divided to each group member. This situation is also common every Ramadhan, where after each person has completed his juzuk, they would then hold a khatam al-Quran (completion of the recitation of the whole Quran) ceremony. My question is what is the ruling of dividing the juzuk of the Quran to be recited? And is it considered as khatam al-Quran where each person will receive the rewards of khatam al-Quran?

Always reciting the Quran is an encouraged deed. Allah SWT promises those who recite the Quran various rewards and high status. Among the rewards is stated in a hadith narrated by Abu Musa, where the Prophet PBUH said:

The Meaning of Khatam al-Quran

The word khatam is an Arabic word (ختم) means closing. (Refer Kamus al-Ma’ani). Thus, khatam means the closing or ending (completion) of the 30 juzuk of al-Quran, whether it is by recitation or memorization.

Indeed, Khatam al-Quran ceremony has its own advantages and benefits. Among them is that blessings are showered and supplications are granted during the ceremony, this is according to an athar from Anas bin Malik RA:

“As for Anas, when he completed his Quran, he would assemble his children and family and supplicate with them.”

It is also narrated to be from the practice of the salaf where when Abdullah bin Mubarak completed his Quran, he would increase his supplication for the Muslimin. (Refer Al-Tibyan fi Adab Hamalah al-Quran, pg. 160)

Please refer to our related article for further reading on the topic:

Furthermore, ceremonies such as these are also called as dhikr (remembrance of Allah SWT) ceremony where it consists of the recitation of the Quran in a congregation, certain dhikr according to certain kaifiat (methodology) and guideline as stated by scholars in their books. Such ceremonies are stated in a hadith narrated by Abu Hurairah RA, where the Prophet PBUH said:

“No people get together in a house of the houses of Allah (i.e. a mosque), reciting the Book of Allah, and learning it together among themselves, but calmness (sakinah) comes down to them, (Divine) mercy covers them (from above), and the angels surround them, and Allah makes a mention of them among those who are with Him.”

The Ruling of Dividing the Juzuk of the Quran

It is generally known that people who recite the Quran are rewarded greatly and this is stated in a hadith of the Messenger PBUH:

There are several hadiths which discussed on the matter of khatam al-Quran, among them is:

According to the above hadith, it is clear that a person should not be too hasty in his recitation of the Quran and complete it in less than three days. He should focus on the quality of his recitation by celebrating the tajwid rules and tadabbur (contemplation) and understanding the meanings of the verses of the Quran itself.

However, Imam al-Zarkasyi stated in his book: “The chosen opinion in this matter (it is impermissible to complete the recitation of the Quran in less than 3 days) is different according to the situation of a person (considering) in terms of his determination, weaknesses, tadabbur, and focus when reciting. The reason is it is narrated that Saidina Uthman RA completed his recitation of the Quran in one night.” (Refer Al-Burhan fi Ulum al-Quran, 1/471)

Thus, we could see that there are various suggestions in order to complete the recitation of the Quran once a month, such as by reciting a juzuk a day, which is to recite 4 pages for every obligatory prayer then he would have recited a juzuk a day and others. This depends on the wisdom and creativity of each person.

In short, the practice of dividing the recitation of the Quran in our society today is a commendable and encouraged act. The reason is the Prophet PBUH did not specify any methodology and it is up to us to recite it how we want to. Furthermore, it is to encourage people to increase their recitation of the Quran. Especially in the honoured month of Ramadhan.

May Allah SWT give us all the correct understanding in practising the religion. Amin.