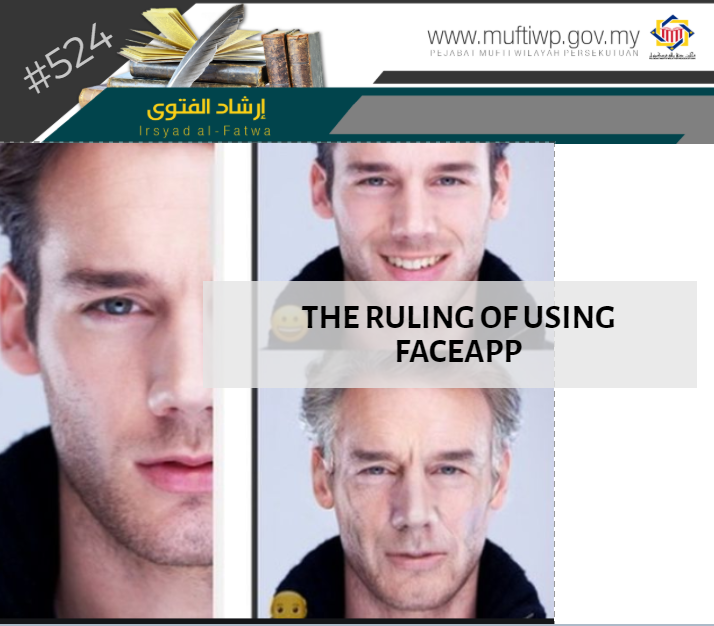 Assalamualaikum. I would like to ask for the opinion from SS Mufti pertaining to the face-changing application (FaceApp). This application may change one’s appearance into a younger and older look and also able to change the gender of the person in the photo. It has gone viral on social media lately. The question is, what is the ruling of changing one’s face using the app (FaceApp). Hope for an explanation from SS Mufti. Thank you.

FaceApp is a photo and video editing application for iOS and Android developed by Wireless Lab. The app generates highly realistic transformations of human faces in photographs by using neural networks based on artificial intelligence. The app can transform a face to make it smile, look younger, look older, or change gender. [1] Based on our observation, the app may change the picture of a woman to a man with moustache, beard and short hair. While the picture of a man may be changed into a woman exactly like the real ones with long hair. These situations may confuse others of one’s identity because the total transformation of the face to different gender seems so realistic. Besides, those with the app may also use anyone’s photo to apply the changes and publish it to the public. That also may cause danger because one may misuse others’ photo and post it without his permission.

Generally, referring to the function of the app (FaceApp) which is used to change one’s photo, it is seen as deriding the saying of Allah SWT who prohibit His servants from changing their original form. Changing Allah SWT’s creation means changing the fitrah (true nature) set by Allah SWT upon His servants; whether through religious or His creation perspective. This is as the following dalil say:

[Adhere to] the fitrah of Allah upon which He has created [all] people. No change should there be in the creation of Allah.

Changing Allah’s creation is among the deceptions of shaytan. This is in accordance with the following dalil:

and I will command them so they will change the creation of Allah.

According to Abu Jaafar al-Thabari Rahimahullah, the correct meaning of changing Allah’s creation فَلَيُغَيِّرُنَّ خَلْقَ اللَّـهِ is changing the teachings in the religion (Islam) because another verse proves that the meaning is religion in Surah al-Rum verse number 30. لا تَبْدِيلَ لِخَلْقِ اللَّهِ. If it is meant so, then the prohibited action by Allah includes changing Allah’s creation. (See al-Jaami’ al-Bayan ‘An Ta’wil Aayi al-Quran, al-Thabari (9/222).

The ruling of a man resembling a woman and vice versa is haram. The issue of resembling the opposite gender has been discussed by us in detail through the article entitled Bayan Linnas Series 5: Issue of Transgender, Tasyabbuh or Resemblance; Its Ruling through the link http://bit.ly/2EzjRAJ

Coming back to the presented question on the issue of changing face into the form of the opposite gender, we are of the opinion that even if it is a mere picture without involving any direct physical change, it is still prohibited. This is because the App is unbeneficial apart from the fact that it defames oneself because he or she showcases the picture of him or her in the opposite gender.

Allah SWT prohibit insulting oneself (defaming) as His saying:

And do not insult one another

Insult in the stated verse also means defaming. Imam al-Thabari Rahimahullah stated that insult (defamation) may be done by hands, eyes, tongue and signs. While the meaning of “أَنفُسَكُم” is a reminder for those with good intellect to not defame himself as well as defaming others which is the same as defaming oneself. (Refer al-Jaami’ li-Ahkam al-Quran, al-Qurtubi ( 16/327).

Next, spreading of the photo which has been applied with gender-bend to be seen by the public is worried to influence the people as well as making an unbeneficial action a trend.

Besides, the usage of FaceApp to transform into the opposite gender indirectly show the support towards the act of tasyabbuh (resembling the opposite gender) like the mak nyah or tomboy without we even realizing it. The Muslim community should play their role in raising awareness and reshaping the identity of that community so that they may return to their true nature, and not making them be accustomed with the actions towards tasyabbuh even if it is not through physical essence.

Next, the prohibition from using the app is due to being worried that it becomes the beginning towards tasyabbuh in a physical way which at first only a thoughtless joke. So, the usage of this app is prohibited to curb individual inclination towards tasyabbuh in the context of changing one’s original gender. This is due to the method of sadd al-zarai’ to prevent actions that will lead to the haram. This is also aligned with the following legal maxim:

Whatsoever leads towards the haram is (also) haram

The ruling of changing photos into younger or older look

FaceApp is also used to change one’s photo to make him smile, appear younger or older. If the photo is spread, then the act is a form of deception to others because it does not portray the truth. A strict warning upon deception is given by the Prophet PBUH through a hadith narrated by Abu Hurairah RA where the Prophet PBUH said:

He who took up arms against us is not of us

Besides, the app which able to transform a person to his older look is seemingly alike to predicting future which is surely cannot be known by all humans. Allah SWT say:

Say, "None in the heavens and earth knows the unseen except Allah,

Therefore, transforming one’s face to the opposite gender or even to older and younger looks by editing through the app is a denial towards the true nature (fitrah) as what He wants. All of His creations surely has its own wisdom. Allah SWT say:

We have certainly created man in the best of stature;

In conclusion, after analyzing the dalil and arguments presented, the usage of FaceApp is prohibited. The prohibition is because there is an element of deception towards the face which is not the original, confusing one’s real identity and defaming that individual as well as dishonoring and causing fitnah. We end this by advising the public to choose wisely on the apps used for beneficial purposes. The usage of FaceApp has no benefit and cause harm to religion. Hence, we would like to call the public to avoid using this app or even to spread the edited pictures especially the one with gender-bend.

May we be able to live life according to the real Shari’a teachings. Ameen.