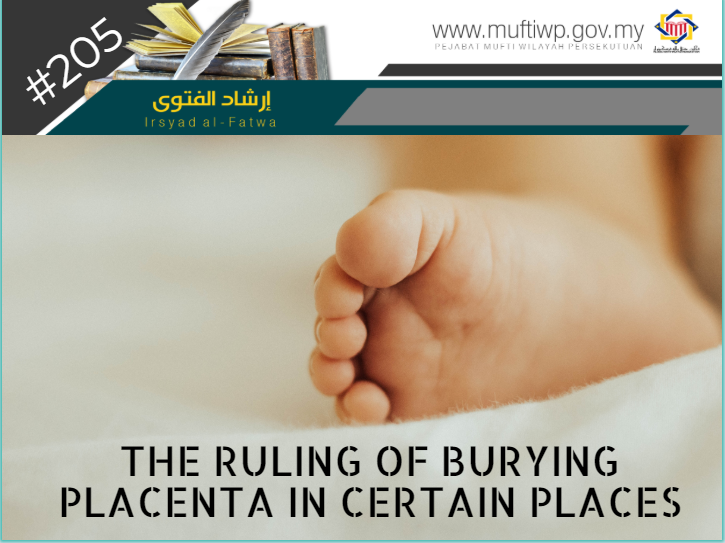 It has been a custom for the Malay community to bury the placenta after a baby is born. The placenta would be washed and wrapped before it is buried. Before the explanation of the rulings of this issue, we would first define the term placenta.

Referring to the 4th edition of Kamus Dewan, the placenta is a temporary organ that connects the developing fetus via the umbilical cord to the uterine wall to allow nutrient uptake, thermo-regulation, waste elimination, and gas exchange via the mother's blood supply. It is also called as an afterbirth for it is expelled from the body fifteen to thirty minutes after birth. The placenta functions as a fetomaternal organ with two components; the fetal placenta, which develops from the same blastocyst that forms the fetus and maternal placenta, which develops from maternal uterine tissues.

Simply put, the maternal placenta is the part that wrapped the baby during pregnancy and fetal placenta is connected to the umbilical cord.

The author further states (1/349): “As for the parts that are separated from something that is alive or there is a doubt as to its death, for example, the hand of a thief, nail, hair, blood clot (alaqah), blood from cupping and the like, then it is sunnah to bury them to honor their owner. Syeikh al-Mutawalli Rahimahullahu Taala explains that it is also sunnah to wrap parts such as a hand with a cloth before it is buried.”

To conclude, the maternal and fetal human placenta that is separated from a child is pure and not considered as najis. Thus, it is sunnah to wrap the maternal and fetal parts of the human placenta with a suitable cloth, whether it is washed first or not, then buried properly at a suitable place, honouring is the owner. However, if it separated when the child has passed away, then it must be buried according to how a deceased is handled and buried.

Islamic scholars state that the burial of placenta is qiyas (analogically deduced) of the sunnah of burying any parts from a human that are separated from him, such as nail, hair and others. Hence, the same applies to human placenta. They refer to an athar by Ibnu Umar Radiyallahu anhu, a companion of the Prophet PBUH, that buries his nails and hair that is trimmed and cut.

“It is sunnah to bury anything that is trimmed such as nails or cut such as hair, from its owner. Muhanna asked Imam Ahmad: ‘Should one bury or throw parts of him such as hair and nails?’ Then Imam Ahmad Rahimahullah Taala answered that they should be buried. Then he asked again, ‘Is there any evidence that came to you that explains this ruling?’ Imam Ahmad answered, “Ibnu Umar RA buried them.”

However, it is not a sin if the placenta is thrown away and not buried.

Our opinion regarding the arrangement to prepare a particular place to bury the placenta does not contradict syarak from the discussion and explanation from Islamic scholars, taking into consideration of the wisdom of burying the placenta or any parts of human, if they are separated from their owner, which is to avoid or prevent the act of sorcery.

It is advised to set apart the placenta of Muslims from the non-Muslims to protect the public’s interest and avoid confusion in our society.

May this explanation benefit us all in understanding the issue better. Wallahua’lam