IRSYAD AL-FATWA SERIES 217 : THE RULING OF WOMAN ON HER MENSTRUATION HANDLING AND MANAGING THE DECEASED AS WELL AS ATTENDING THE FUNERAL 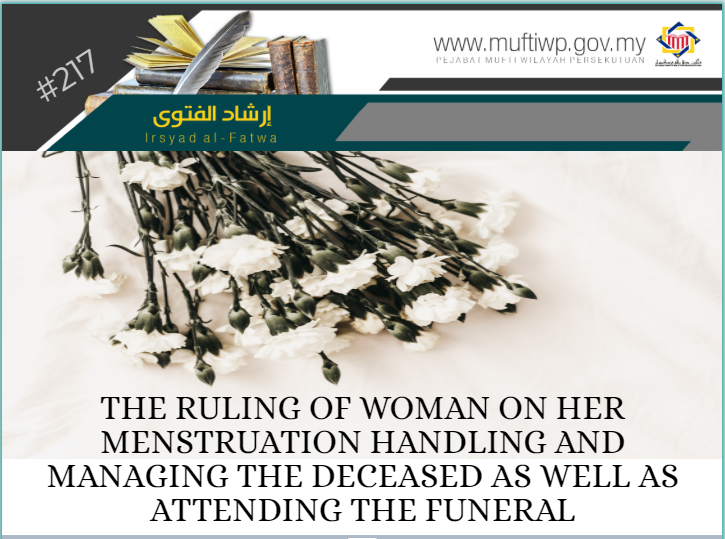 What is the ruling for a woman on her menstruation handling and managing the deceased and went for the funeral?

Alhamdulillah, praise and thanks to Allah SWT for the many countless blessings He has blessed us all with. Blessings and salutations to the prophet Muhammad PBUH, his family, companions and all those that follow his teachings.

Since the term handling and managing the deceased is too broad, to answer this question we will divide it into three parts:

In mantan fiqh such as Safinah al-Naja, it is stated that there are 10 things that are prohibited for a woman on her menstruation:

The act of bathing and shrouding of a deceased is not included in the things that are prohibited for a woman on her menstruation. Islamic scholars also did not include that a person must be among the people that are in a pure state, or not in hadas (which includes woman on her menstruation) as one of the valid conditions for bathing and shrouding of a deceased.

Regarding the ruling of a woman bathing the deceased (body/corpse) of her husband, it is permissible. Refer Irsyad al-Fatwa Series 211 : Is the Ablution of a Husband Invalid When He Bathed His Deceased Wife?

A woman on her menstruation is prohibited from performing any type of prayer, and the prayer performed when she is menstruating is invalid. This is in accordance with a hadith from Fatimah binti Abu Hubaish R.Anha, where she experienced istihadhah blood, then the Prophet PBUH said:

"If it is menstrual blood then it is blood that is black and recognizable, so stop praying, and if it is other than that then perform Wudu', for it is just a vein."

Hence, jenazah (funeral) prayer performed by a woman on her menstruation is invalid and is not enough to waive the communal obligation (fardu kifayah) of a community in a certain place.

The ruling for a woman on her menstruation attending a funeral

First: Generally, women are discouraged (it is makruh) to follow the procession and attend the funeral, whether she is on her menstruation or not. This is in accordance with a hadith from Ummu Atiyyah R.Anha, she said:

“We (womenfolk) were prohibited from accompanying a funeral procession, but we were not compelled (not to do so).”

Some Islamic scholars hold the opinion that it is prohibited for them (women) who are not responsible for managing and handling of the deceased. This is in accordance with a hadith from Ali RA, he said:

This hadith states that they have sinned and are not rewarded for their act of following the funeral procession and attending the funeral. Refer al-Fiqh al-Manhaji (1/260).

However, there are scholars that state that this hadith is daif (weak) and the ruling stays as makruh (undesirable). Refer al-Majmu Syarh al-Muhazzab (5/277).

As for woman whose husband died, then it is prohibited for her to follow the funeral procession and attend his funeral, for she has to complete her iddah unless there is a reason (permitted by syara’) or in a desperate situation (darurah). A hadith from Ummu ‘Atiyyah al-Ansariyyah R.Anha states:

“We were forbidden to mourn for a dead person for more than three days except in the case of a husband for whom mourning was allowed for four months and ten days. (During that time) we were not allowed to put kohl (Antimony eye power) in our eyes or to use perfumes or to put on colored clothes except a dress made of `Asr (a kind of Yemen cloth, very coarse and rough). We were allowed very light perfumes at the time of taking a bath after menses and also we were forbidden to go with the funeral procession.”

In a hadith from Jabir bin Abdullah RA:

Imam al-Syafie Rahimahullah said: “The date garden for the Ansar people is near their house and the harvesting time is during the day, thus the Prophet PBUH permits the act.” Refer al-Hawi al-Kabir (11/272).

It is also understood from this hadith, that a woman that is divorced (bain) and by the death of her husband that has no provision for herself is permitted to go out of her house to work for provisions for herself to fulfil her needs. This includes asking for a fatwa from scholars, talking to her neighbours to prevent herself from being lonely and to do sadaqah near her house (whether it is next to her house or near it), on the condition that they must stay and sleep in their house and not at some other place.

Among the matters that are not considered as a need is visiting graves. Syeikh Ibrahim al-Baijuri said in his book, Hashiyah: “And it is not a necessity for the visit of the sick, even if the sick people are her parents. Thus, it is prohibited for her to visit her parents who are sick. It is also prohibited to visit the graves of wali and soleh people, even the grave of her own husband is prohibited.” Refer Hasyiah al-Baijuri (2/259).

Second: Women are generally restricted (makruh) to visit graves. Especially if it is feared that the woman cannot control her feelings and would fall to sin when attending the funeral or visiting the grave if she mourns the death, lamenting, wailing and tearing her clothes. However, if it is certain that she would commit this sin, then it is prohibited for her. This is in accordance with a hadith from Abu Malik al-Asy’ari RA, the Prophet PBUH said:

“If the wailing woman does not repent before she dies, she will be made to stand on the Day of Resurrection wearing a garment of pitch and a chemise of mange.”

The same is stated in another narration, from Abdullah bin Mas’ud R.Anhuma, the Prophet PBUH said:

"He who slaps the cheeks, tears the clothes and follows the traditions of the Days of Ignorance is not from us."

From Ibn Abbas R.Anhuma, he said:

“The Messenger of Allah PBUH cursed women who visit graves,”

However, if the woman is someone who has a strong belief and faith and is certain would not do any misdeeds and would mind her manners and follow the guidelines set by syara’ of visiting graves, then it is not prohibited for her to visit graves. This is in accordance with a hadith from Anas bin Malik RA:

“The Prophet PBUH passed by a woman who was sitting and weeping beside a grave and said to her, "Fear Allah and be patient."

“Say" Peace be upon the inhabitants of this place among the believers and Muslims. May Allah have mercy upon those who have gone on ahead of us and those who come later on, and we will join you, if Allah wills.”

If it is prohibited for woman to visit the graves, surely the Prophet PBUH would advise woman against it and not teach his wife a prayer (doa) at the grave.

The author of the book al-Fiqh al-Manhaji said:

“It is sunnah to visit the grave of the Prophet PBUH, the anbiya’ and soleh people on the condition that they do not parade themselves, mingle with or pressed against a crowd, or have any contact with other men and raise their voice, such that it may lead to fitnah, as often happen when they come to visit the grave.” Refer al-Fiqh al-Manhaji (1/266)

Some scholars state that it is sunnah for woman to visit the graves of her family members. Refer al-Taqrirat al-Sadidah (1/389). Wallahua’lam.

According to the above discussion, the following are our statement:

May this answer bring understanding and benefit to us all. Wallahua’lam.