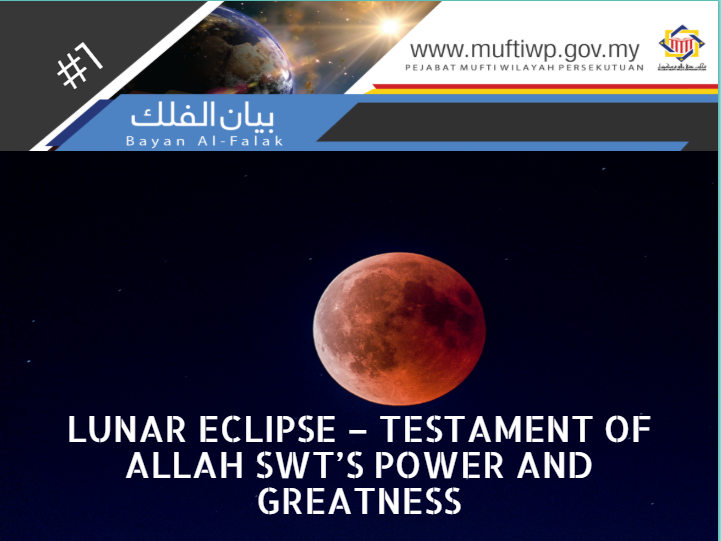 The creation of the universe is one of the proofs of the greatness of the Almighty Allah SWT. This includes the creation of the sun and moon which then plays an important role in the changing of night and day which ultimately benefit humans. The power and greatness of Allah SWT transcend our knowledge and covers every aspect of human life on this earth. This is explained by Allah SWT in the Quran, where He said:

“Indeed, in the creation of the heavens and earth, and the alternation of the night and the day, and the [great] ships which sail through the sea with that which benefits people, and what Allah has sent down from the heavens of rain, giving life thereby to the earth after its lifelessness and dispersing therein every [kind of] moving creature, and [His] directing of the winds and the clouds controlled between the heaven and the earth are signs for a people who use reason.”

Every movement in this vast universe is determined by Allah SWT and everything has its own orbit. This is one of the greatness and eminence of Allah Taala which could never even be compared to the insignificant knowledge and insight of humans. This is proven through Allah SWT’s statement:

“And it is He who created the night and the day and the sun and the moon; all [heavenly bodies] in an orbit are swimming.”

The moon is a natural satellite of earth orbiting around it. Every planet in the solar system has its own moon that orbits around it and acts as its natural satellite. However, the moon does not project its own light but illuminates by reflecting the light from the sun.

There are several aspects and wisdom from the creation of the moon that greatly affect human life. As an example, the dates of the months in Islam is determined by the moon’s orbit around the earth. This clearly shows how greatly the moon is in our lives. This is in accordance with the statement of Allah SWT:

“It is He who made the sun a shining light and the moon a derived light and determined for it phases - that you may know the number of years and account [of time]. Allah has not created this except in truth. He details the signs for a people who know,”

The moon also plays an important role in determining the specific season in time, such as the time of Hajj, which is a season when Muslims perform the worship of hajj and umrah. This is in accordance with Allah SWT’s statement:

The lunar eclipse will occur when the earth’s position is in between the moon and the sun. This phenomenon happens during the full moon. During a lunar eclipse, the light from the moon will turn reddish slowly when the moon passes the earth after it passes it entirely. This only happens at certain times. Allah SWT states in the Quran:

“And the moon - We have determined for it phases until it returns [appearing] like the old date stalk.”

There are several types of lunar eclipse:

Eclipse is not an accidental phenomenon but is among the incidents that are considered as “Sunnatullah (law of nature)” where it has been predetermined by the will of Allah SWT. This is stated in the Quran in Surah al-Fath:

“[This is] the established way of Allah which has occurred before. And never will you find in the way of Allah any change.”

“The sun and the moon are two signs among the signs of Allah These do not eclipse either on the death of anyone or on his birth. So, when you see them, hasten to prayer. He also said this: Observe prayer till Allah dispels the anxiety (of this extraordinary phenomenon) from you.”

The following table is the expected lunar eclipse occurrences for the year 2019 and 2020. In the year 2019, there will be a total lunar eclipse, but it will not pass through the Asian region but only in European and American regions. During an eclipse, we should ponder on the greatness of Allah SWT through His creations and perform the sanctioned worships of sunnah eclipse prayer, repent, supplicate to Allah SWT and others.