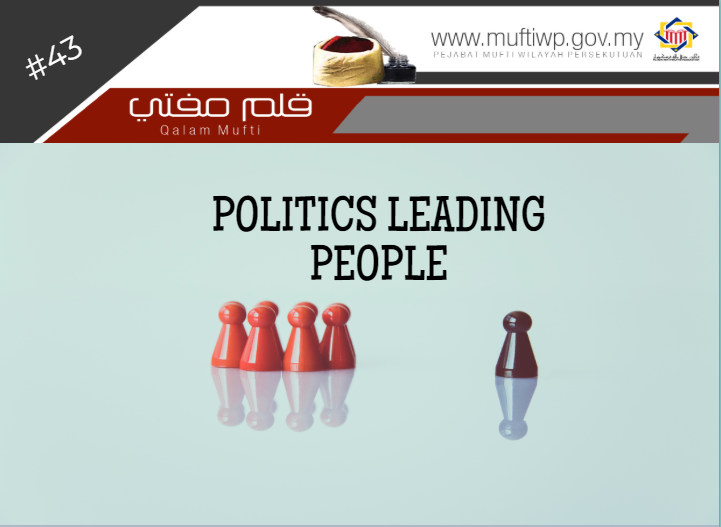 I purposely state this title today, reflecting on how true are the words of Imam Syafi’e. Coincidently, while I was reviewing Mawaqif al-Ulama’ Imam Syafi’e that we have published in the first edition Biography of Imam Syafi’e in 2012.

In the book, we wrote the wise words of Imam Syafi’e, where he said: “Politic that could lead the people is far more challenging than politic to lead animals.” Contemplating on these words, we realize that the art and mastery in managing people is very difficult. A man may be able to handle thousands of cows in their shed, or tame tens of tigers for entertainment in circuses, but humans are unique. They have intellect, desires, ingenuity, wants and different plans which will make it different for every person managing them. Ten people who are supposed to be managed may have a hundred characters, attitude, actions and wants different from the instruction given to them. This is how humans are.

Muawiyah bin Abi Sufyan RA who became the caliph on 40 Hijrah until 60 Hijrah centered in the city of Damascus once said regarding his governing experience said to Ziyad bin Abihi: “Indeed, we do not govern people with one type of governance where we are soft on them that they are free to commit transgressions. The same with if we are strict on everything, for surely, we would lead the people towards destruction. There are times when we should be stern while for me, I employed a soft approach.” (See al-'Iqd al-Farid, 1/41; al-Bidayah wa al-Nihayah, 11/443 and Siyar A'lam al-Nubala', 5/149)

For this reason, it is not bizarre when Badiuzzaman Sa’id al-Nursi was asked regarding governance, he said: “I seek refuge from shaytan and politics.” (See Apolitical Interpretation of Islam: Said Nursi's Faith-Based Activism in Comparison with Political Islamism and Sufism, pg. 102)

Imam Syafi’e once said as cited by his student, Yunus: “Teaching humans are more difficult than teaching animals.” It’s normal for us to see people are able to manage their own tasks and successful in their plans, but not many are able to manage people by first capturing and moving their hearts, where people would follow him due to their love, adoration and great respect towards him. This is what happened to the Prophet PBUH, where the companions of the Prophet PBUH are loyal to him due to their love to the Prophet PBUH, whether during peaceful times or in times of war. Their wala’ towards the Prophet PBUH is absolute applying and practising what is written in al-Quran al-Karim.

Scholars explained the meaning of the term politics with two definitions:

Syeikh Abu A’la al-Maududi said that humans need governance for the obligation of amar makruf and nahi mungkar. Without governance or centre of authority, this will be impossible to be implemented. If humans fail to implement amar makruf nahi mungkar, surely this earth will be covered with blood and a thousand and one transgressions by humans. (See al-Khilafah wa al-Mulk, by Abu A'la al Maududi, pg. 107)

We personally feel that the charisma in a leader is a part of a blessing from Allah SWT. Whereas another part of it can be attained by learning and experiencing it first through interactions with those who had faced tribulations in their lives. This is invaluable in shaping one’s character and actions and forming a great and effective qiyadah.

We will end this Qalam Mufti citing the advice of Caliph Umar bin Abdul Aziz who said to Amar ibn Muhajir: “When you see me deviating from the truth, then put your hands on my shoulders and shake me and say: Hey Umar, what have you done?” (See our book titled Umar bin Abdul Aziz, pg. 117)

We pray to Allah SWT and ask from Him: