IRSYAD AL-FATWA HAJJ AND SACRIFICE (QORBAN) SERIES 16: THE RULING OF MEAT OF ANIMAL SACRIFICE AS PAYMENT FOR SLAUGHTER 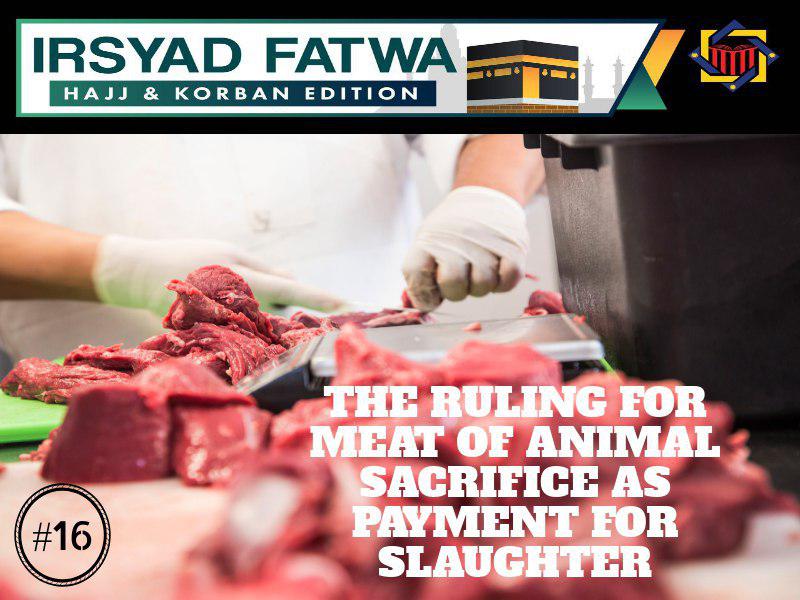 Is it permissible to give some of the meat of animal sacrifice (for qorban) as payment to those who helped slaughter the animals?

There is a sound and valid hadith regarding the above-mentioned issue where there is a direct prohibition to give some of the meat of animal sacrifice as payment for those who helped slaughter the animals. ‘Ali bin Abi Talib RA narrated the hadith stating:

"The Messenger of Allah (ﷺ) appointed me to be in charge of his sacrificial animals, and commanded me to distribute all their meat, hides and saddlery to the poor, and not to give anything from them to the slaughterer."

While in another narration by Muslim, there is an addition from ‘Ali bin Abi Talib RA where he said: “We pay those who helped with the slaughter from our own (property).”

Al-Imam al-Son’ani Rahimahullah commented on the above hadith in his book Subul al-Salam stating:

Next, al-Imam al-Nawawi Rahimahullah states in his book al-Minhaj where he commented on the hadiths in Sahih Muslim saying:

“It is prohibited to give anything from the sacrificed animal to al-Jazzar (slaughterer) and this is the opinion of our madhab. This is also the opinion of ‘Atho, al-Nakha’ie, Malik, Ahmad, Ishak and it is narrated from Ibn al-Munzir from Ibnu Umar from Ahmad and Ishak that it is permissible to sell the skin of animal sacrifice and donate the proceeds to charity.” (See al-Minhaj Syarh Sahih Muslim. Dar Ihya’ al-Turath al-‘Arabi, 9/65)

According to the above discussion and reviewing the evidences and scholars’ opinion regarding this issue, we would like to state that it is prohibited to give any part of animal sacrifice to the slaughterer as payment for them.

As for an alternative solution for payment, we could take the example of ‘Ali bin Abi Talib RA in the hadith in Sahih Muslim where he said that the wages for the slaughterer can be paid by the person/organization who sacrifices the animal using their own property/assets.

Mosques which are responsible in managing the qorban could also include a reasonable cost for each qorban portion; considering the payment of slaughterers for their expertise and time, and other related costs such as the transportation costs and others.