IRSYAD AL-FATWA HAJJ AND SACRIFICE (QORBAN) SERIES 6: THE RULING OF SACRIFICE FOR A DECEASED 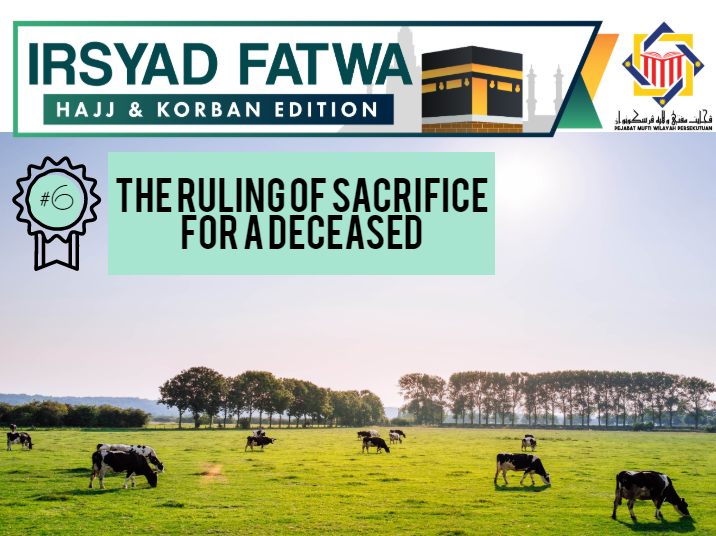 Is it permissible for me to perform a sacrifice on behalf of a deceased?

There is a difference of opinions among scholars regarding this issue. In this issue, there are several opinions:

This is in accordance with a hadith from ‘Aisyah R.Anha where it is narrated that the Prophet PBUH perform sacrifice and state:

It is generally known that among the ummah of the Prophet PBUH are also people who have passed away and the Prophet PBUH specifically designate that his sacrifice is for his ummah. Thus, it is evidence for the permissibility of performing a sacrifice on behalf of a deceased.

Al-Kasani Rahimahullah said: “From the aspect of istihsan, death is not a barrier for taqarrub. This is supported by the permissibility to donate and to perform hajj on behalf of a deceased and it is in accordance with the actions of the Prophet PBUH himself, where the Prophet PBUH sacrifices two goats; one for himself and the other for the ummah of the Prophet Muhammad PBUH who did not perform sacrifice for there are among the Prophet PBUH’s ummah who passed away before he had the chance to perform sacrifice. Thus, this shows that those who passed away are still able to taqarrub with it (through the worship of sacrifice)…” (See Bada’i al-Sana’i, 5/72)

Furthermore, Ibn ‘Abidin Rahimahullah said: “Whoever performs the worship of sacrifice on behalf of a deceased, perform it the same way as if he would perform the sacrifice for himself in terms of the distribution and taking (for eating) of the meat of the sacrifice. The rewards are for the deceased while the ownership is to the person performing the sacrifice.” (See Hasyiah Ibn ‘Abidin, 6/326)

Whereas, the Hanabilah scholars said: “The slaughter for the worship of sacrifice for a deceased is encouraged (in which) those who are alive to sacrifice for the deceased, for the deceased are in need of rewards and by performing this (slaughter), it also benefits the living in terms of as a source of food, donation and gift.”

Although it is an issue where there are differing opinions from among the scholars, we are inclined towards the third opinion, where most Syafi’eyyah scholars state that in order for one to perform a sacrifice for a deceased, the deceased must have asked for it to be performed before he passed away.

However, we do not deny the opinion of some Syafi’eyyah scholars where they state that a request from the deceased is unnecessary. This is stated by Prof Dr Muhammad al-Zuhaili Hafizahullah: “(and it is said) the slaughter for a deceased is valid even if the deceased did not request for it, for it is considered the same as the validity of giving charity on behalf of a deceased where it will benefit the deceased.” (See al-Mu’tamad fi al-Fiqh al-Syafi’e. Dar al-Qalam, 2/490)

Hence, we hope that this issue could be understood clearly in accordance with Shari'a and fiqh. Wallahua’lam.