IRSYAD AL-FATWA SERIES 298 : THE RULING OF AN EX-HUSBAND AND WIFE MEETING TOGETHER TO CO-PARENT THEIR CHILD 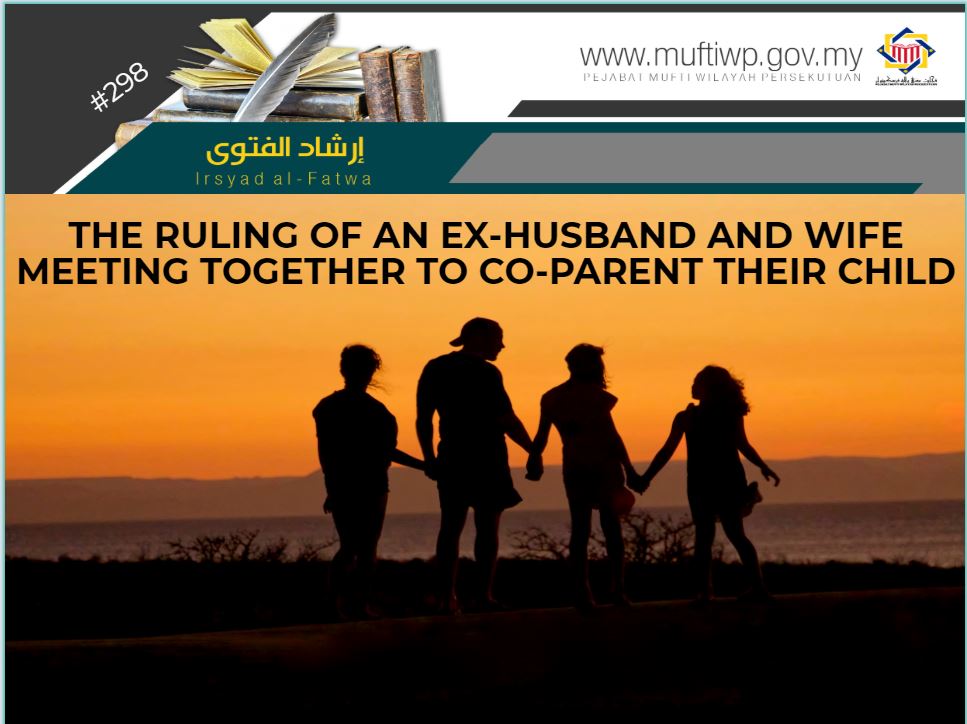 The Ruling for an Ex-Husband and Wife Meeting Each Other

The original ruling for an ex-husband and wife to meet is the same as two ajnabi man and woman meeting. Regarding the ruling of this situation, it depends on the necessity of the situation. If it is not a necessity and if there are elements of looking, being in the company of and talking and being friendly with each other, then it is prohibited. This is in accordance with the statement of Allah SWT:

“Tell the believing men to reduce [some] of their vision and guard their private parts. That is purer for them. Indeed, Allah is Acquainted with what they do.”

Imam Ibn Jarir al-Tobari commented on the above verse, stating: “They are to guard and lower their gaze, from anything that is prohibited by Allah SWT for them to see….and that is purer for them in the eyes of Allah SWT and better for them.” Refer Jami` al-Bayan (19/154)

However, in exigent situations or when there is a necessity, it is permissible for ajnabi man and woman to look at each other. The scholars have set a guideline regarding the matters that necessitates a man to look at an ajnabi woman:

The above exceptions depend on the necessity of the situations and should not exceeds the need. If the purpose is just to fulfil one’s desires, then it is prohibited. Some scholars ruled it permissible for a man to look at the face of a woman or her hands up to her wrists, if it would not lead to fitnah and without any desires. Imam al-Bajuri agrees with this opinion. Refer al-Taqrirat al-Sadidah Qism Ibadah (page 205)

According to the above facts and rulings, in our opinion it is permissible for your husband to meet with his ex-wife. The reason is, he still has a responsibility towards the four-year-old child in giving the child nafkah and education. Surely, this would result to the mu’amalat (dealings) that includes meetings, conversations and discussions with his ex-wife for she is the carer of the child. The status of a mother as the one who holds the custody of a child who has not reached maturity (mumayyiz) is clearly stated in a hadith from Abdullah bin ‘Amru:

“A woman said: Messenger of Allah, my womb is a vessel to this son of mine, my breasts, a water-skin for him, and my lap a guard for him, yet his father has divorced me, and wants to take him away from me. The Messenger of Allah (ﷺ) said: You have more right to him as long as you do not marry.”

Hence, the act of meeting with an ex-wife for the sake of the child is permissible.

However, in the case of khalwat (a man and a woman being alone in suspicious proximity), then it is prohibited for them to be alone together without the presence of another person (a mahram to the woman) or another trusted Muslim woman that could prevent them from committing fornication. It could be anyone (not necessarily the second wife). Or they could hold their meetings in a public place where it would not lead to fitnah. This is in accordance to a hadith of the Prophet PBUH from Abdullah Ibn Abbas R.Anhuma, where the Prophet PBUH said:

“A man must never be alone with a woman unless there is a Mahram with her.”

In another narration by al-Tirmizi (2165), from Ibn Umar R.Anhuma, the Prophet PBUH said:

Answering your first question, you should advise them the following:

May these advise benefit us all.

Removing Jealousy and Suspicions Towards Husband

Other than the above advise, we would like to state that your jealousy is completely normal for any woman. However, do not let your feelings turn into negative feelings, such as prejudice and mistrust. Hence, you should always think positively and surrender your affairs to Allah SWT after praying and doing the best that you could.

Imam al-Nawawi states in Syarh Sahih Muslim (6/44): “Qadhi ‘Iyadh cited an opinion stating that forgiveness are for those who thinks positively towards Allah SWT when he asks for forgiveness, and the acceptance of repentance when he repents, and the acceptance of supplication when he prays, and the sufficiency in needs when he asks for sufficiency. Another opinion state that what is needed from him is his hope and desire to be forgiven, and this is the sound opinion.”

“O Ever-Living One! O Self-Existing One! With Your blessing I ask for help, to improve myself and my affairs, and don’t let me handle my matters alone even for a split second.”

As a woman, you should try your best to increase your taqwa and understanding regarding marriage in accordance with al-Quran and al-Sunnah, your rights as a wife, your partner’s rights and all the important things about married life, such as Islam family law in The Syariah Criminal Offenses (Federal Territories) Act 1997 and the Administration of Islamic Law (Federal Territories) Act 1993.

You and your husband should try to be better and improve yourselves by joining activities such as education classes and sermons in mosques or surau, or increase your worship and perform the congregational prayer, recitation of the Quran and fasting together. Thus, the time you spend with your husband will be filled with positive memories. Surely, these would prevent negative elements such as prejudice and mistrust, for your marriage will be built on the basis of servitude towards Allah SWT.