AL-AFKAR #12: BELIEVING IN DIVINATION BASED ON NUMBERS, DATE OF BIRTH THROUGH METAPHYSIC 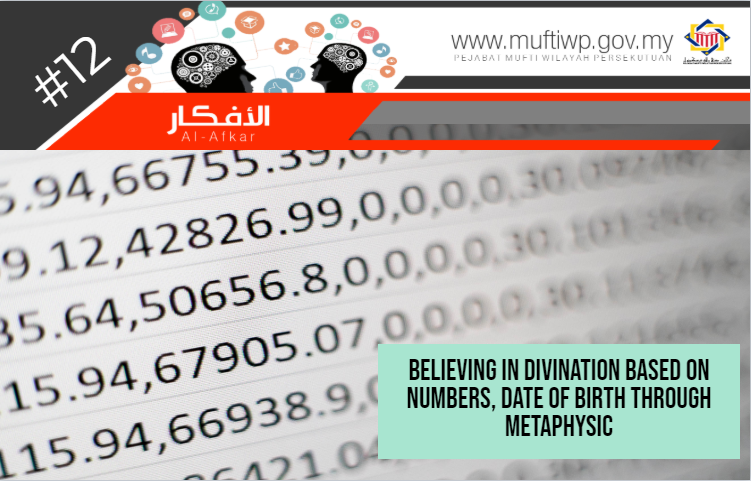 What is the ruling of believing in divination of numbers, money magnet or certain dates through metaphysic?

Kamus Dewan dan Pustaka defined metaphysic as the philosophy regarding the supernatural. In Arabic, metaphysic is known as ilm ma ba’da al-ṭabīʿah. Metaphysic is a branch of philosophy that studies the matters regarding the characteristics of reality, what exists in this world and its arrangement or design. Among the scholars that discuss on metaphysic is al-Kindi in Falsafat al-Ula, Risalah fi al-Ibanah ‘an Sujud al-Jirm al-Aqsa wa Ta’atihi Lillah and Risalah fi Kammiyyat Kutub Aristatalis wama Yuḥtaju ilayhi fi Taḥsil al-Falsafah. Ibn Rushd also discusses this topic in Tafsir Ma’ Ba’d Tabi’at.

Thus, specifically, metaphysic does not only discuss about numbers and letters for the purpose of predictions as understood by some people in our society. It is a vast field of knowledge which includes the discussion of the unseen and physical world and not solely a discussion of predictions of the future. The knowledge of the usage of numbers and letters for the purpose of divination is known as numerology.

Without denying that some scholars used the knowledge of characters/letters/numbers as an effort of treatment, it can also have a negative effect to the public if it is misunderstood as musabbib al-asbab if the illness is cured.

A person’s future is included as unseen matters, where not a single person has the knowledge of it except Allah SWT. Allah SWT state:

Say, "I hold not for myself [the power of] benefit or harm, except what Allah has willed. And if I knew the unseen, I could have acquired much wealth, and no harm would have touched me. I am not except a warner and a bringer of good tidings to a people who believe."

We are concern that the action is closing the distance between us and the warning of the Prophet PBUH, where he said:

“A person who goes to a fortune-teller and believes what he says, he has disbelieved in that which was revealed to Muhammad.”

“He who visits a diviner (‘Arraf) and asks him about anything, his prayers extending to forty nights will not be accepted.”

According to Imam al-Nawawi: “The meaning of his prayers is not accepted, means there will be no rewards for his prayers. However, the prayers that he performed are considered as he has already fulfilled his obligation and he does not need to replace his prayers.” (See Syarh Shahih Muslim, 14/227)

“Say, "None in the heavens and earth knows the unseen except Allah,”

We are inclined to state that believing in number predictions, money magnet, the practise of kissing money, a person’s characteristics is determined by certain dates or numbers through the knowledge of numerology is sinful in Islam. The same goes for certain numbers giving different auras as stated by some people in our society in motivational programs.

At the same time, these restrictions is included in Guidelines for Islamic Motivational Programs published by JAKIM which states: It does not use any form or method that has the elements of prediction of the future such as the method of numerology, the secret of birth date, matrix code, the secret of letters, mole, handwriting, astrology and others like it.

Hopefully, we reflect and contemplate on the importance of protecting and maintaining our faith and be more careful when getting involve in any training and motivational programs.