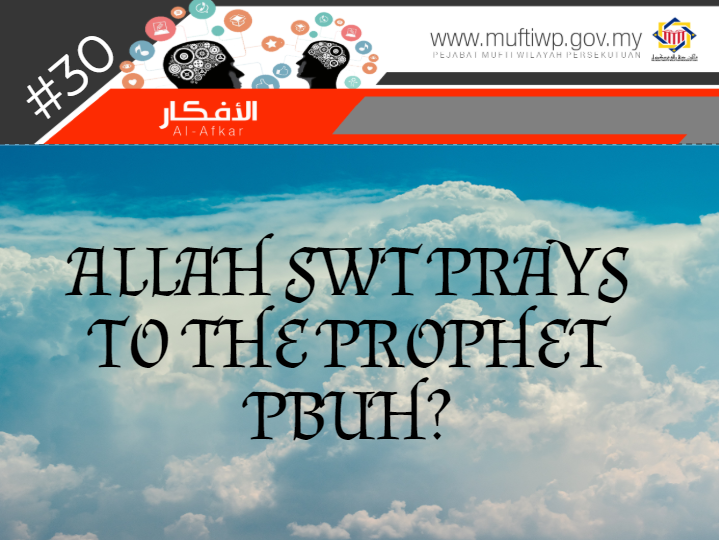 The phrase ‘Allah prays to Muhammad’ is a common and recurring issue highlighted by those who intend to confuse the Muslim ummah regarding the belief in Islam. They presented the following verses of the Quran:

“Those are the ones upon whom are blessings from their Lord and mercy.”

“It is He who confers blessing upon you, and His angels [ask Him to do so] that He may bring you out from darkness into the light. And ever is He, to the believers, Merciful.”

They understood the word in bold literally, which means prayer. Which means Allah SWT prays to the Prophet PBUH. Hence, who is the real God, since Allah SWT prays to Muhammad? Is this the accurate meaning? In our opinion, such claims are a result of one’s ignorance in the Arabic language itself.

We will first explain the literal definition of (الصلاة) and the technical term used in Arabic language. The word “solat” is an Arabic word. It is a derivative (masdar) of the verb (fi’l); solla (صلّى), yusolli (يصلّي), solatan (صلاة) which means, supplication, istighfar, forgiveness, love, Islam and religion. (See al-Mu’jam al-Arabi al-Asasi, 1/746)

Imam al-Nawawi states that the word (الصلاة) in the literal sense originated from the word supplication. This is the opinion of the majority of linguist and other scholars. Al-Zajjaj said that its original meaning is constant and consistent. Other scholars including al-Azhari said: “Prayer from Allah SWT means love, from the angels means asking for forgiveness and from humans means humbleness in one’s heart and supplication.” (See al-Majmu’ Syarh al-Muhazzab, 1/118)

The word solat has been widely used even before Islam. The Arabs before Islam used the term solat to mean supplication and istighfar. It is also a derived from the word (صلة) which means connection for solat connects humans with their God and closing the distance towards the blessing of their God. (See Ruh al-Solah fi al-Islam, pg. 23)

The full discussion of the above discourse can be reviewed in Lisan al-A’rab (14/464-467), which includes evidences from the Quran, hadith and Arabic poetries which proves that (الصلاة) does not only means prayer.

Hence, we conclude that the word (صلّى) literally could have several meanings such as supplication, istighfar, forgiveness and other related meanings depending on the context of the sentence. (الصلاة) could also have two meanings; (i) supplication seeking for blessing (ii) worship. (See al-Qamus al-Muhit, pg. 1681). If it is from Allah SWT, then it means purification, love and praise. If it is from the angles, it means istighfar and if it is from humans, it means supplication.

As for the word (الصلاة), according to the majority of scholars, it is term used in Islam explaining: Words and actions that starts with takbir and ends with salam which includes the niat (intention for prayer), following certain conditions. (See al-Mausu’ah al-Fiqhiyyah al-Kuwaitiyyah, 27/51) This is the definition usually understood in the Arabic language that refers to the act of prayer.

The Meaning of the Word (على)

In Arabic, ‘ala is categorized as a preposition (harf al-jar). ‘Ala has several meanings, some of them are:

This is the original meaning as stated by Allah SWT:

“Some of them We caused to exceed others.”

The word (مع) means together, as stated by Allah SWT:

“And gives wealth, in spite of love for it,”

“And to glorify Allah for that [to] which He has guided you,”

It has the same meaning as (في), as stated by Allah SWT:

“And they followed [instead] what the devils had recited during the reign of Solomon.”

Syeikh Dr Wahbah al-Zuhaili explains the usage of the word ‘ala from the usul fiqh perspective and he also includes the examples of its usage in fiqh. Some of the examples of the words used in sentences; (لفلان علي ألف درهم) which means “So and so owed me 1,000 dirhams.” Here, the word ‘ala is understood to mean isti’la’ which means on him for so and so has on him a debt of 1,000 dirhams. It also has the same meaning as ‘bi’ which means with. For example, in the sentence (بعت منك هذا العبد بألف درهم) which means “I have given you this slave with the price of 1,000 dirhams.” (See Usul al-Fiqh al-Islami, 399-400)

“And invoke [ Allah 's blessings] upon them. Indeed, your invocations are reassurance for them.”

As an example, the above phrase (وَصَلِّ عَلَيْهِمْ) means “And invoke upon them.” It does not mean “And pray to them”, for if it has such meanings, then it should be (وَصَلِّ لهُمْ).

Another example would be the usage in the sentence (صلى الله عليه وسلم), translated in The Dictionary of Modern Written Arabic by Hans Wehr reviewed by J. Milton Cowan. It is a renown Arab_english dictionary written by a German Arabic linguist. According to him, (صلى الله عليه وسلم) means, abbreviation of eulogy following the name of the Prophet Muhammed: (صلى الله عليه وسلم) (salla, salaam) God bless him and grant him salvation!”

One word could have a wide variety of meanings. This is a common attribute in language, especially the Arabic language for it is a language rich with vocabulary. Even in English, a word may have several different meanings. For example the word ball, can be either be a noun (round spherical object), a verb (forming a ball – making something form a closed round shape) or have a completely different meaning where a ball can also mean a dance (a large, formal occasion where people dance); depending on the context of the sentence. Furthermore, if the prepositions used in the sentence is different, then surely, it will have a different meaning.

We will conclude this discussion citing the words of al-Safarini:

“(الصلاة) from Allah means love, from the angels it means istighfar, and from humans means humbleness of the heart and asking for goodness.” (See Ghiza al-Albab, 1/71)

In our opinion, there is a need for preachers and those teaching Islamic lessons to have a strong basis in Arabic in order for them to face people presenting this wrong idea. It is crucial to avoid any misunderstandings that some people try to create and at the same time facilitating the process of dakwah to them. Wallahua’lam.